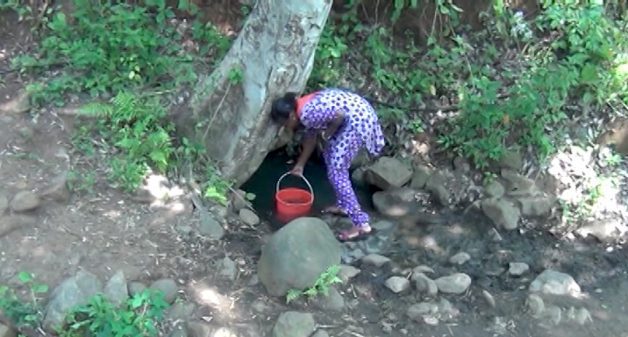 A dirty ditch is the only source of water in Kulappadi village. (Photo by K. Rajendran)

Two years ago, when Narendra Modi on Independence Day announced the launch of the Swachh Bharat Abhiyan (Clean India Campaign) from the ramparts of Red Fort in Delhi, 15-year-old Velligiri living in Kulappadi tribal hamlet in Pudur Grama Panchayat in Palakkad district of Kerala, who was listening to the Prime Minister’s address on television, had asked his elder brothers, “Why are our people so dirty? In this modern age, why are some Indians still defecating openly?”

Kulappadi is one of the remotest but picturesque hamlet out of 192 tribal villages in Attapadi Forest Reserve located in an informal buffer zone bordering the Silent Valley National Park. Almost all the people in Kulapaddi are from the Irula tribe. Despite its remote location, it boasts of total literacy and many of the villagers hold government jobs. There’s not a single house that does not have a TV set or a toilet.

On November 1 last year, the date when Kerala state was formed, Chief Minister Pinarai Vijayan had declared it as the first ODF (Open Defecation Free) state in the country. Shockingly however, almost all the villagers in Kulappadi, including Velligiri, who were strong critics of open defecation, have turned to defecating in the open in the swaths of the forest. What went wrong in these two years?

Irritated Velligiri posed a well thought out question. “If you cannot provide us water to quench our thirst, how could you insist us to defecate in our toilets?”

Irula women carrying water pots on their head and walking long distances is a common scene in the Attapadi hills. “Give us water,” is the common refrain of the people of the area. The scarcity of water in the region has been exacerbated by the significant decrease of rainfall during both the South West and the North East monsoons. 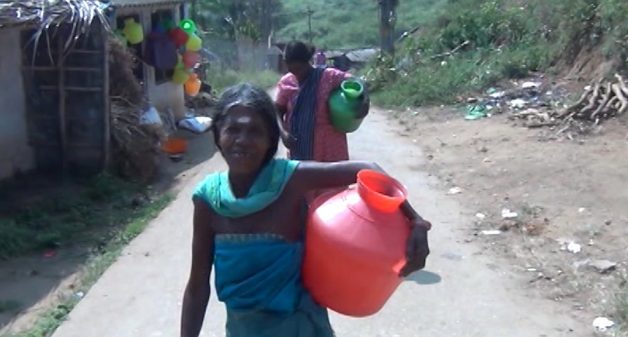 Women have to travel for 1 km to fetch water. (Photo by K. Rajendran)

“The impact of climate change is the root cause. Though many rivers and streams originate from the Western Ghats, water scarcity is extensively visible across the hills. In addition to climate change, deforestation weakened the water storage capacity of Attapadi soil,” V.S. Vijayan, former Chairman of Kerala State Biodiversity Board, told VillageSquare.in.

The 249 sq km Attapadi Reserve Forest consists of Pudur, Agali and Sholayar Gram Panchayats (village councils). Both Pudur and Sholayar have always been affected by water shortage as they are in a rain-shadow region. Compared with the average annual rainfall of 2,500 mm in Kerala, this region gets between 500 mm to 700 mm of rains every year.

According to the Environmental Land Capability Classification Index, till the end of the nineties, land in Pudur and Sholayar had been included in class-3 Soil land Classification Category, which is fertile and adequate for cultivation. But, in a recent survey conducted by Department of Geography, Government College, Chittur, it has been found that the same region has degraded to category-5, which is considered unfertile and inadequate for cultivation.

“Massive deforestation and soil erosion are the main reasons for the degradation. If soil erosion happens at this level, it would certainly result in depletion of water level and water scarcity,” Richard Scaria, who led the survey, told VillageSquare.in.

However, the tribal people are either unaware or not interested in the scientific aspects of their misery. There are more concerned about the probable imminent outbreak of epidemics.

A thin ditch flowing nearly 1 km away from the Kulappadi village is the only available water source for the Irula. Pathetically, this little muddy water body is being used for drinking, bathing and washing. On many occasions, the people have come across wild animals in the ditch because it’s one of the few water holes in the area. Most of the other water resources that the animals depended upon have almost dried up.

The polluted water has lowered the immunity of the tribal community. According to the Kerala State Health Department, in the past three years, Attapadi has seen 91 malnutrition deaths of tribal babies.

Attapadi is the only tribal block in Kerala that is home to Mudugar, Kurumbar and Irula tribes. Demographic changes in the past six decades indicate how deeply the saviours of the forest are being exploited. In 1951, 90% of total population of Attapadi was tribals. In 1981, it declined to 60%. In last Census of 2011, they have further dwindled to 34% of the total population.

At the same time, thousands of non-tribal immigrants have occupied and settled in most of the fertile land beside the only perennial water resource of the region — the Bhavani River. Slowly but steadily, the intruders have outnumbered the tribal community. Moreover, they have garnered pattas (titles) to the fertile land. 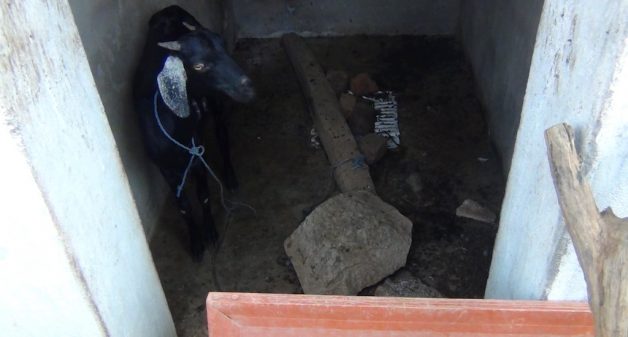 The water shortage has turned a toilet into a goat shed. (Photo by K. Rajendran)

A pretty journey along the Bhavani offers glimpses of prosperity that are in absolute variance with the wretched interior tribal villages. Coconut, aracanut, plantain, etc., have been flourished even in the drought.

“Even the last drop of water in Bhavani is being used by the non-tribal, rich and powerful farmers. Rampant mining of bore wells causes further depletion. The tribes are the only victims,” said Scaria.

In Kulappadi, almost all the Irula households own at least 4 acres of land. The Forest Rights Act being implemented since 2006 had offered a new ray of hope. The Irulas traditionally cultivate pigeon pea, chickpea, finger millet, red gram, etc., which typically do not require intensive use of water. But today they are interested to shift to cash crops and paddy cultivation.

“Due to acute water scarcity, I couldn’t even cultivate our traditional grains. How can I experiment plantain and arecanut in my barren land?” asks 30-year-old Thaghachan, who has already decided to migrate to a city in Kerala or Tamil Nadu, anticipating a disastrous summer and absolute unemployment.

As elsewhere, the water scarcity in this region has become a political rather than an environmental issue.

Jyothi Anil Kumar, President of Pudur Grama Panchayat, said that the persisting water problems of Kulappadi would be resolved immediately. “Rs 3 lakh will be spent to pump out water from a newly made pond to the hamlet,” Kumar told VillageSquare.in.

But no one in the hamlet is ready to believe this assurance because they say similar statements have been made for many years but there have been no results on the ground. “Historically, a section of politicians and contractors have joined together to exploit the tribal people,” a village council member said on the condition of anonymity.

After fetching two pots of water from the ditch 1 km away, Muthulakshmi, an old lady, narrated the fate of her toilet. “Till last month, this room was my toilet. Now I gifted this room to my dearest goat because I don’t have water to clean it,” she said.

This article was made possible by the FEJI-ATREE Journalism Fellowship 2016.