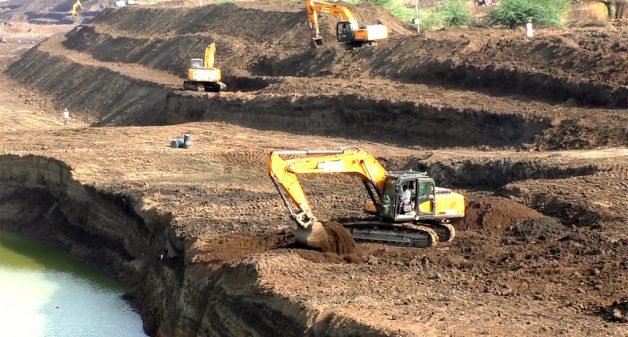 The deepening of Manjra river near Latur in Maharashtra. (Photo by Ravindra Jagtap)

“All 11 talukas (administrative blocks) of Solapur district showcase how JalYukta Shivar (JYS) has converted a waterless land to a watered land,” says Anna Rajmane, a social worker and founder of Jivhala Society for Mentally Challenge, a non-profit organisation that works in Solapur, Barshi and Antroli district of Maharastra.

Given the scenario in Solapur, this is no mean achievement. An average annual rainfall of about 550 mm and no comprehensive watershed development had paralyzed systems around drinking water and irrigation. This changed a few years ago with the sincere efforts of the administration led by innovative district collector Tukaram Mudhe. “Honest and transparent implementation any government scheme can alter the state of the people,” Rajmane told VillageSquare.in.

Rajmane is not alone in lauding the recent efforts of soil and water conservation in Solapur. The outcomes speak for themselves. The need for water tankers fell from 673 when rain was 673 mm in 2013-14 to 40 tankers when the rainfall was 238 mm in 2015-16. Mundhe’s exemplary efforts towards watershed development have become demonstration project of JYS campaign of the state government that aims to make the entire Maharashtra state free from droughts by 2019.

Public works worth around Rs.70 crore were completed through people’s participation. Various soil and water conservation efforts were achieved in 130,000 hectares of land. As much as 42.66 lakh cubic meters of silt was removed from various tanks and 29,926 wells were recharged.

This holistic approach offered magnificent fruits. Rural and urban water supply improved and the groundwater levels rose significantly. “Dynamic and innovative efforts from Tukaram Mundhe and his team from the administration deserve huge respect,” Parineeta Dandekar, an environmentalist working for in SANDRP (South Asia Network on Dams, Rivers and People – ‎South Asia Network on Dams, Rivers and People), told VillageSquare.in. “These works hold great potential and seeds of change for a better future.”

Mundhe, a 2005 batch Indian Administrative Service officer, has taken on shady politicians, and sand and land mafia in his career spanning just over 10 years. He has been transferred eight times during this period. On January 13, the sand mafia tried to kill Mundhe. However, he was rescued in time. The officer was felicitated and honoured by the government of Maharashtra for his outstanding work and in Solapur during 2015-16. Immediately after this, Mudhe was rewarded with a transfer as the civic chief of Navi Mumbai Municipal Corporation.

But the example of Solapur is yet to be followed widely. The other 30 districts of Maharashtra saw fragmented approach of watershed development. Deepening, widening and straightening of rivers and streams were the buzzwords in the summer of 2016 when JYS was being actively encouraged by the state administration. Plenty of voluntary agencies and private firms joined hands with the locals. 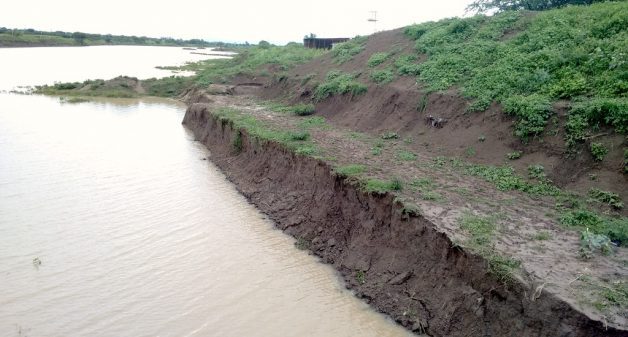 The widening of Manjra river at Araskheda village shows fragile banks that lead to renewed silting. (Photo by Gajanan Chafekarande)

However, there are some issues and objections that are being raised about the way JYS is being implemented. Many JYS schemes did not achieve their objectives. “Random deepening and widening of rivers and streams will damage the ecosystem of a river,” water expert Pradeep Purandare, a professor at Water and Land Management Institute in Aurangabad, told VillageSquare.in. “The soil removed in this process is just deposited on the banks of rivers. Rain will bring soil to the riverbed to reduce and arrest the percolation. Even government directives ask to avoid deepening and widening of rivers. ”

The JYS campaign must be seen on the backdrop of the stark water crisis in Maharashtra in 2016. In particular, eight districts of Marathwada, infamous for its farmer suicides, suffered from chronic droughts in the past two decades due to erratic rainfall. In Latur district adjacent to Solapur, district collector Pandurang Pole had to impose restrictions around the local reservoir to avoid fights breaking out among desperate residents. Water resources needed to be patrolled. Latur residents received 2.5 million litres water carried by a train (Jaldoot) 325 km away in Sangli for as many as 111 days.

Immediately after assuming the power in state in December 2014, Maharashtra Chief Minister Devendra Fadanvis announced the ambitious JYS programme to end the water crisis by 2019 by consolidation all soil and water conservation. Prior to this, soil and water conservation schemes are carried out by state and central governments through 10 different departments and agencies such as agriculture, social forestry, irrigation, water resources, and so on.

These 15 schemes obtain funds under various heads like the Mahatma Gandhi National Rural Employment Guarantee Scheme, Integrated Watershed Management Programme, tribal development, funds for local area development to state and federal lawmakers, etc. As a result of the integration as many as 176,488 works are completed, according to information available on the state government’s website. Maharashtra claims to have brought millions of hectares of land under irrigation after spending Rs 7 billion.

To understand impact of soil erosion, the Central Soil Water Conservation Research and Training Institute (CSWCRTI) at Dehradun conducted a study that revealed startling facts. “India is losing 5,334 million tonnes of soil every year due to soil erosion. The rate of loss is 16.4 tonnes per hectare every year,” CSWCRTI said.

Soil and water cannot be conserved by a fragmented approach. Water slows down along with soil. Classical watershed development always advocates the so-called ridge to valley principle that mandates that rainwater be stopped along the ridge, which is the highest point of the land. The upper catchment area is to be treated first to reduce velocity of water and arrest soil erosion to prevent silt deposition. Rivers and drains are to be treated last.   Guidelines of watershed development by the federal Department of Land Resources give clear instructions to follow this approach.

What are benefits from the millions spent under the JYS programme? “The design of JYS is clumsy, shoddy and corruption-friendly,” Vithal Hajgude, a civil engineer and earthmoving machinery provider from Latur, told VillageSquare.in. “Too many agencies are operating for the same cause under various heads.” Hajgude has filed a petition in the Mumbai High Court, challenging the method adopted by the department of agriculture to allocate soil and water conservation work.

Many engineers from the Water Resources Department agree that the guidelines for JYS are loosely worded. In any government scheme such as road building, a detailed project report is prepared, which never happened in JYS, they point out. All these government officials declined to be named.

Many say that expert advice was also not sought before implementing the programme. “Unfortunately we are totally side lined in the process of JYS,” a geologist from the state government’s Groundwater Survey and Development Agency told VillageSquare.in on condition of anonymity. “Many structures across the state would be evaporators and not percolators as anticipated.” The rate of evaporation of water in Maharashtra is very high. Scientists opine that more than 60% of the total water in shallow structures of JYS will just evaporate.

The repair of existing structures in JYS to make it meaningful will be a huge task. “Pitching and strengthening of river banks is the biggest necessity,” the geologist said. “A recharge shaft that goes up to aquifer will help in proper percolation to make structures useful.”