A most prized harvest, the falling production of saffron in the villages of Pulwama is now a serious concern for the many farmers who have been traditionally cultivating the rare flower 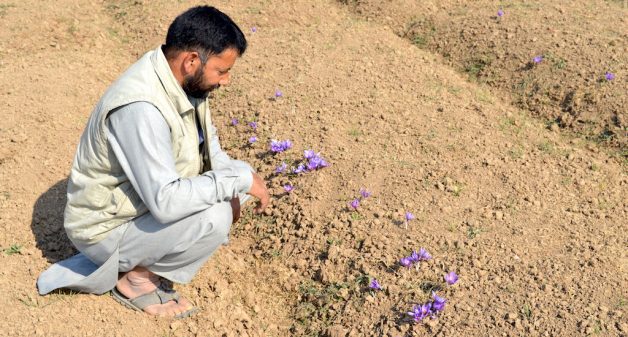 As the harvesting of saffron flowers draws closer, farmers around the fields of Lethipora in Kashmir’s Pulwama district are interested in only one debate these days: whether there would be a good yield of saffron this year or not.

Only a few are hopeful about a good crop. Others sound pessimistic in the backdrop of frequent disappointments they had to face up regarding saffron production in recent years.

Lethipora, some 20 km southwest of Srinagar near Pampore town in south Kashmir, is one of the main areas where saffron cultivation is the prime economic activity of the people. The surrounding villages of Chandhara, Samboora, Ladu, Konibal and Ondorous are known for saffron farming in the Pulwama district. Pampore town is famous for its saffron only due to these villages.

Often termed as the king of spices, saffron is only grown in Kashmir besides Iran and Spain. The crop grows once a year and is restricted only to parts of Pulwama district in the entire Kashmir region. Several other geographical areas in Kashmir are known for a variety of horticultural products — the northern town of Sopore and the southern town of Shopian for apples, the central district of Budgam for almonds and the far northern district of Kupwara for walnuts.

The production of saffron (Crocus sativus) plays a significant role in the economy of Jammu & Kashmir. Saffron is the second largest industry in the state next to horticulture industry, providing livelihood support to more than 20,000 families. Cultivation of this lucrative crop in Jammu & Kashmir dates back to 500 AD. The mountainous state has a monopoly in saffron production in India, although the country still needs to import as Jammu & Kashmir produces between 10 and 15 tons against India’s total demand of around 40 tons.

Farmers of Pulwama are acutely aware of the value that their saffron has and the huge demand for it in India. This makes them always think about their saffron more so when the harvest is just round the corner like it is now. In the first week of November, the harvesting of saffron will start for this season. 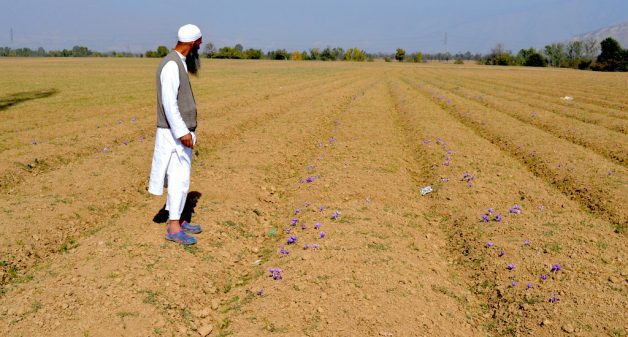 A saffron farmer taking a look in his field. (Photo by Athar Parvaiz)

In the month of October, the farmers are increasingly worried about the saffron harvest. Pulwama farmers say it has not been encouraging in recent years. This year promises to be no different.

“I just returned from my farm where I met many other farmers. I heard all of them saying that this year also the saffron-yield would be quite low,” said Imtiyaz Ahmad, a young farmer who owns three acres of land in Lethipora.

He and other farmers are already worried how the saffron production is declining in the area. Saffron production, Ahmad said, has now got reduced to only 10 per cent of what it used to be before the year 2000.

His fellow farmer, Ghulam Nabi Reshi, said that some 20-25 years earlier they used to dry up the saffron crop on their rooftops given the large saffron harvests in those years. “Those were the days! In those years, our saffron fields were nothing but money-minting machines for us,” Reshi said. “Not anymore.”

Another farmer, Javid Ahmad, said that some of the people, who had been working in government sector doing various jobs, gave up the jobs since they thought that their saffron farms, which were producing good cash, needed their attention.

One of those former employees, who had given up a government job, is Ghulam Mohammad, who used to serve as a helper in the health department. “Now I strongly regret my decision. I took the decision of quitting my job since our family was earning a good amount of money from saffron farming. I thought I had no need of doing a petty government job,” Mohammad said, adding that his farm would produce somewhere around 250 to 300 tolas (one tola equals 11.76 grams) of saffron, which has now reduced to around 50 tolas only.

Production in Kashmir reached its peak in the 1990s, with an annual average of around 15.5 tons over 5,700 hectares, but both acreage and yields have declined since then, with per hectare production at less than 2 kilograms compared to around 6 kg in other parts of the world. 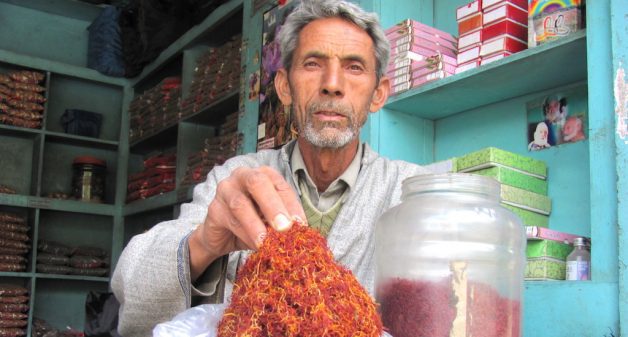 Farmers in Lehipora said that saffron production, in their area and all the adjoining areas where saffron is grown, was phenomenal in the past. Tariq Ahmad and his two brothers, who used to live together, are now split. But all the brothers have now good businesses thanks to their earnings from saffron in the past spread over six acres of land. Tariq owns a stone-crusher as also his brother while the third brother owns a fuel station. “We invested the money, which we had earned over the years, to set up our businesses,” Ahmad said.

Farmers said that temperature fluctuations and lack of rainfall at crucial times is the most important reason for the decline in saffron production. “During most of the years since late 1990s, we have been witnessing that it either doesn’t rain during the month of August and September, or if it rains, it rains a lot,” said Dilawar Reshi, a farmer. “From August till some days before the harvest in November, the saffron crop should get some rainfall for the proper growth. But rains hardly occur in these months now.”

Firdous Nahvi, who has carried out extensive research on saffron, mentions the lack of rainfall at crucial time as one of the important reasons for dwindling saffron production. “Usually, the critical months of September and October are dry, and thus flowering is delayed due to delayed sprouting which does not correlate with critical limits of day and night temperature, thereby, effecting crop productivity,” he observes in his study. Till 1999–2000, he writes, Kashmir was receiving well-distributed precipitation in terms of rain and snow to the extent of 1,000–1,200 mm, which at present has decreased to 600–800 mm.

The government of India under the National Saffron Mission in 2010 had launched a Rs 3.73 billion project for creating drip irrigation facilities and other support for helping farmers to cope up with the challenges for growing saffron. But farmers said that the drip irrigation system is yet to become functional.

Another concern for the famers is the adulteration to Kashmir’s saffron by mixing fake saffron with it. “This has been a huge setback for Kashmir’s saffron in recent years though we are now creating awareness about the real saffron mainly through the Indian customers who directly come to us for buying saffron,” said Noor Mohammad, a saffron dealer in Lethipora.

Saffron production has also suffered because of the shrinking saffron land. According to official figures, saffron land had declined from over 5,000 hectares in 1996-97 to 2,880 hectares by 2006, mainly because of the extension of the built-up areas due to increasing population.