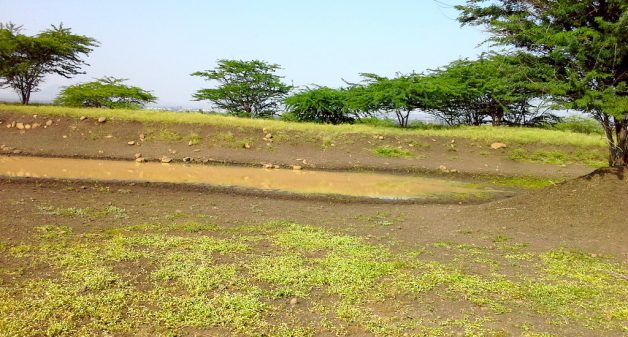 The plateau slopes gradually, the hills in the distance are blue, the grass underfoot is more than you would expect in October, covering the stones and rocks, the hardy little flowers adding some colour; the silence is welcome. There are also these curious trenches, following the curve in the hillside. These are the continuous contoured trenches (CCTs), 2 x 2 ft trenches dug into the top of the plateau to halt the free flow of water to help in the percolation and recharging of the water table.

This is a hilltop in the village of Kumbharwalan in Purandar taluka (administrative block) of Pune district in Maharashtra and these CCTs are critical to the water conservation programme that has been running here since 2012. These trenches help slow running water down to a walk, bring the walking water to a crawl, and stop that crawling water, which then recharges wells. The entire process of halting water has to begin at the top, which is why the CCTs on the hilltop.

Recharging and raising the level of the water table is the first step in water budgeting, which is at the root of a successful, four-year-old programme being implemented by Pani Panchayat (Water Council), a social movement that began in these parts over 40 years ago. Once there is water, there is action to change cropping patterns so that there is water for everyone through most of the year.

B. Salunkhe in the early 1980s started an experiment of organising local people to harness available water resources for agriculture in a drought-prone area of Pune district characterised by high levels of poverty. In order to optimally utilise locally available water resources for protective irrigation on a sustained basis, he started the initiative for water conservation and utilization of water was through organised collectives of water users known as Pani Panchayats.

A new spirit now resonates in the Pani Panchayat of Kumbharwalan village with two local residents, Prashant Borawake and Prashant Kumbharkar, both 34, having taken the lead in a programme that is spread over 50 sq km, covering five villages. Both have professional work experience besides farming, Borawake having been in the police for a brief spell after doing his postgraduate degree in Geography. Kumbharkar holds a Masters degree in Computer Science and works night shifts in an information technology company in Pune, about 32 km away. During the day, he helps in the implementation of a central government scheme under the Integrated Watershed Management Programme (IWMP).

“There are enough programmes of the government, central and state, for water management. The missing part is the extension work and knowledge of local agronomic conditions. We aim to provide these inputs since each location has a different need, a different cropping pattern, and that needs to be taken into consideration,” Borawake, coordinator of Pani Panchayat, told VillageSquare.in.

“You cannot depend solely on the government. The community must come forward and participate in the programme of repairing and rejuvenating the bandharas (small bunds or embankments),” Kumbharkar told VillageSquare.in. “They have to take ownership of the project since they benefit from it.”

The belief that water is a shared community possession has now begun to seep into this remote village. The Pani Panchayat’s charter demands that work on the repair and maintenance of these embankments has to have participation of local residents and both Borawake and Kumbharkar noted that when they started work on the first of the 16 bunds in the village, people came forward to work on them even if they were not direct beneficiaries. 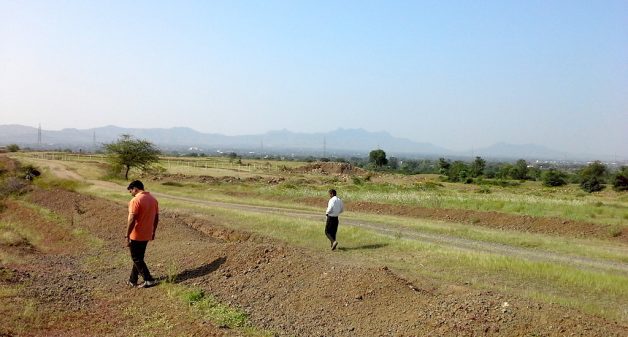 The work of the past four years has begun to show results. The height of the water in wells rose to 1.75 metres in March-April last year and there was water in the bunds till May. This is important for the agriculture of the region. Onion, a Rabi (winter) crop, requires water in the last few weeks. Any shortfall at this critical stage means 50% drop in production. That has now been overcome, with water in the bunds able to support onion and wheat, the main Rabi crops of the region.

Purandar taluka lies in the rain shadow region of the Western Ghats and gets an average rainfall of 200-250 mm in a year. It is also downstream of Pune city and therefore gets the untreated sewage the city releases into the Mula-Mutha River. That untreated water was beginning to contaminate the region, forcing villagers to depend on expensive water tankers. That was till this work began. For the past two years, the village has stopped buying water.

A grizzled, over fifty-year-old Laxman Ramchandra Kamthe sat poring over registers with details of daily expenditure on each of his smallholdings, which total seven acres. Kamthe and a few other progressive farmers of Kumbharwalan track every aspect of their business, ensuring cost control systems for optimal returns. “Only if we are self- sufficient in water are we truly independent,” Kamthe told VillageSquare.in.

The villagers of Kumbharwalan believe they have a replicable model, having started with the basics. They outline the steps that need to be followed: measure rainfall, weather and climatic patterns, understand the topography; look at landholding patterns which give an insight into cropping patterns and prioritise issues.

A notable feature is that water guzzling crops like sugarcane, thanks to high prices mandated by the central government’s fair and remunerative price (FRP) have not had much traction in this region, a historically dry region. However, workers here note that the moment water becomes available, some farmers expressed their desire to plant cane. Despite that dream, acreage under cane has fallen from some 2.5 acres to less than an acre just when water availability has increased. This can be attributed to the Pani Panchayat actively discouraging the planting of crops that require huge amounts of water.

Borawake was clear that the work has just begun: it takes a decade for the water table to stabilise. Along with repairing the bunds, they are also seeking to repair the damaged social fabric of these remote villages.

For the villagers in Kumbharwalan, it’s more than just about the water.