Collective action has enabled many women in Khunti in Jharkhand to rise out of poverty, providing them with new opportunities and ensuring greater choice in their lives 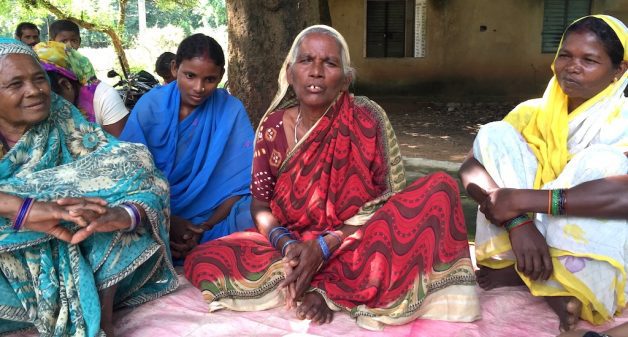 The confident women of Guphu in Jharkhand. (Photo by Suneeta Dhar)

Time was not so long ago when travel meant work for the women of Guphu village in Jharkhand, in distress from home and village, at construction sites or as domestic help. The tiny hamlet in Torpa administrative block of Khunti district was unable sustain the livelihoods of its 21 households of some 400 people. All able-bodied men and women had to migrate seasonally in search of work, and as is usual in the poorer parts of India, it was the women who suffered the most.

Things have now changed for the better in Guphu and its people are no longer held in thrall to forced migration. The women have led the charge. They have taken up diverse livelihood activities such as vegetable cultivation to come out of the endemic poverty that plagues this region in Jharkhand, some 60 km from capital Ranchi.

For some of the women, to be able to travel out of choice and not compulsion, to travel to learn and not just to offer labour, is in itself liberating. “Today we travel beyond the village, not in search of work, but to receive training to improve our lives,” Malti Devi, a resident, told VillageSquare.in. “Some of us have been to Ranchi and others to Delhi for agricultural training programmes. We also go to the district headquarters to negotiate with local governments for development funds. Earlier we had to migrate but now we are more self-sufficient.”

This change is nothing short of dramatic in Khunti, part of the South Chotanagpur Commissionary and home to a large tribal population, mostly from the Munda tribe. The marginalised people, the scheduled castes and tribes, in this newly formed district are still struggling for their basic rights to a dignified life.

Khunti was once characterized by 70-80% migration for work, which has reduced in recent years, largely due to collective efforts by village women organised into small groups by Professional Assistance for Development Action (PRADAN), a grassroots non-profit organisation working to boost rural livelihoods in impoverished parts of India.

The change in Guphu started with the formation of a women’s self-help group a decade and a half ago. “Sixteen years ago, we started our self-help group by each saving Rs 5 every week,” Bimla Devi, a resident, told VillageSquare.in. “We earlier had to take loans from mahajans (moneylenders) and when we could not pay them back, we would lose our land and meagre assets.” Once the women started saving and lending amongst themselves, the situation started improving. 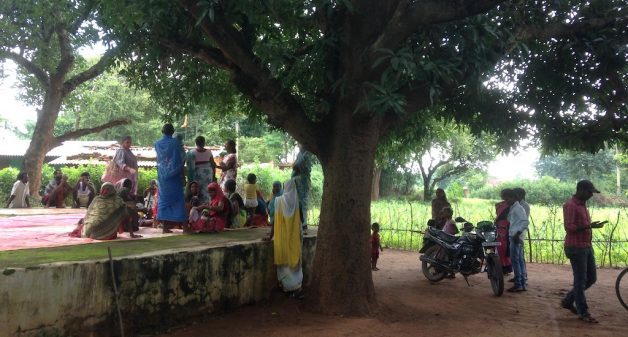 Women gather for a meeting in Guphu village. (Photo by Jael Silliman)

PRADAN helped the women to adopt improved farming practices. It provided training to the women in Guphu to diversify their crop production and emboldened them to access local government bodies for development assistance, including housing. A sustained effort by the women of the village has seen all-round improvement. Unlike other villages in this poor district, Guphu now has tap water and food security. The women are organized through a mahila mandal (women’s collective) to demand and secure their rights.

The newfound confidence shows in a variety of ways. For instance, Aarti Devi, an active member of the collective, was unhappy that her husband had to live in faraway Andaman Islands for a living for 17 years. Empowered by the SHG, she had begun to grow vegetables such as tomatoes, eggplant, broccoli, capsicum and ginger, and was able to support her family on her own.

She proudly narrates how she travelled by foot, rail and ship to find and bring back her husband from the Andaman Islands. Her family is now self-sufficient from the vegetables it grows. There is now enough work in Guphu for her husband to come back home and help her to support their family.

The mobility and independence has won the women much respect both within their homes and outside. “Our husbands respect our independence now. Earlier, they did not like us going to mandal meetings but now they see the benefits the mandal has provided,” Etwari Devi, another resident, told VillageSquare.in. “Now the world comes to see us. We have visitors from as far away as the United States, Australia and Europe to see our work.”

Other women are full of stories of their travels to Kerala, Assam and Uttarakhand to visit other women’s collectives. They are hopeful that their new mango orchards, where they have planted the Amrapali and Mallika varieties, will yield good results in a few years. “The men are working beside us in the fields for a richer harvest. Earlier, we had one crop. Now we grow leafy vegetables and even broccoli that is good for our health,” Bimla Devi told VillageSquare.in. “We are now growing pulses too as they are expensive to buy in the market. Our families now have better diets.”

The Guphu experience is an example of how out-migration, a huge problem in Jharkhand, can be reversed in one hamlet at a time when women take leadership. The women of Guphu now aspire for brick and mortar homes and a paved road from the village to the highway. They are building toilets as part of the Swachh Bharat campaign. Unlike other villages in the district, since they have piped water, the toilets can actually be used.

They have a water tank run by solar power that was acquired through the NalJal Yojana supported by the Drinking Water and Sanitation Department of the state government. In other villages, due to the lack of water, the toilets that have been built are useless, merely a drain on valuable development resources. Since they no longer travel long distances for water and since, the women have access to functional toilets and they can send their children to school on time.

The community is now primed to receive further development assistance. All the families have ration cards, voter cards, Aadhaar identification numbers and bank accounts. Although domestic violence is still a problem, it has declined, as the men are wary of the women’s collective strength.

Despite these advances and the key role women are playing as farmers and homemakers, their land and homes are traditionally registered in their husband’s names. The women said their daughters cannot inherit land, and if mistreated in their marital homes, there is reluctance to take daughters back into their natal homes, as it is against their customary practices. In cases of extreme violence, the women of the collectives have grouped together and placed pressure on the family, and even imposed penalties and sanctions on the wife-beater, to reduce the severity of mistreatment.

The next leap forward to transform their lives, beyond well-being of their family, will be when women can go beyond being instruments of development to being agents of change in their own lives. This struggle for gender equality is yet to begin.