If India has to improve its rank on the global Hunger Index, there has to be an emphasis on alternative and participatory approaches of delivering nutrients to underserved populations 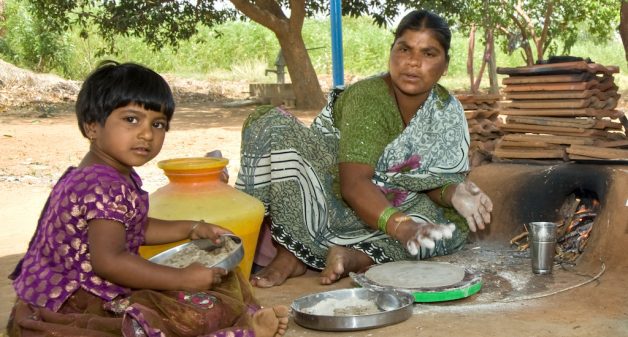 A recent report ranks India at 97th position among 118 countries on what the International Food Policy Research Institute (IFPRI) calls the Hunger Index. Such reports and rankings are at times a shade problematic if they are based on global consumption norms and growth charts. For instance, if one measures the average calorie intake in India with global norms, then over 80% of the population would appear to be under-nourished. And there will be arguments about the need for calories in regions of high ambient temperatures and moderate levels of mechanization, etc. So it is important to understand how the index was constructed and the rankings made.

The IFPRI Hunger Index is based on both outcomes and consumption. It has four components: proportion of people under-nourished as per Food and Agriculture Organization (FAO) standards, proportion of children who are wasted (have body mass index below 18), proportion of children who are stunted (low height for age) and child mortality rate. Only the first among these is open to question on the ground of direct relevance. The other three components are hard outcome numbers and irrefutable indicators of malnutrition, both acute and chronic.

The report evokes a sense of shame but is no surprise. That acute and chronic malnutrition are widely prevalent in India has been well known for at least a dozen years. What is not well known is that efforts to win the battle against malnutrition have remained conventional supply side strategies. In the context of a federal structure of the country and decentralized governance structures within each state, these strategies turn out to be ineffective as they dilute the accountability and discourage out of the box thinking.

The state’s response to chronic and acute malnutrition has been on the supply side. Several departments are involved and they do not seem to work in tandem. There are the famous midday meal programs of education departments for schoolchildren. There are the day care centers (anganwadis) run by women and child departments for children above three years of age. And there is the system through anganwadis of giving iron to pregnant women and take home rations for pregnant and lactating mothers and children below 3 years of age. When all of this fails to make a child be healthy, there are the Nutrition Rehabilitation Centres run by health ministry in which severe acute malnourished children are supposed to be kept with their mothers and treated and fed till they get out of severe acute malnourishment (SAM) category.

The administrative and financial controls on these service units rests with the state machinery or with the local self-government, while funds for some come from the central government. Each of these schemes has a provision for supply of such and such foods and extension, advice or therapeutic inputs form staff. All this has to be managed with high reliability continuously and over extended time periods to show improvements in the parameters, which go to build the hunger index.

All this has to be managed through a decentralized administrative apparatus with diffuse accountability and over extensive territory. In each of these schemes, the children and their parents are seekers of so-called freebies. The social interaction between the giver, the staff in these facilities, and the recipients is lopsided. The beneficiaries become supine supplicants.

There are numerous and ubiquitous issues of fidelity of implementation in terms of staff diligence and regular and timely supply of materials of high quality. The common experience is that the state machinery can be mobilized and galvanized episodically to achieve sharply defined single parameters such as elimination of an ailment such as smallpox. But it is difficult to achieve that level of mobilization of staff on an ongoing basis for years. As a consequence, the progress in regard to the Hunger Index is tardy.

It is possible to change the picture if the state gives up its paternalistic stand of being the provider and focuses on making parents and communities realize that it is their responsibility to ensure that their children remain healthy. This sounds idealistic but then millions of educated Indian mothers do take efforts to ensure that their children are healthy and they do not depend on the state apparatus.

The proportion of people who are so poor that they cannot afford basic foods for their children is much smaller than what seems to be indicated from the incidence of malnutrition. But the proportion of people either ignorant or indifferent to causes of malnutrition is not. This ignorance may be induced and indifference perpetuated by culture, traditions and family norms.

A large number of young girls are malnourished. Yet they are married early and become mothers early, giving birth to low-weight babies. Their in-laws treat them as unpaid off- and on farm labor while their husbands think they are machines to produce babies every alternate year. Then the hygiene standards and quality of drinking water are poor causing recurrent infections. Mothers go to work leaving infants and young children in the care of their slightly older siblings.

Everyone knows that each of these factors contributes to the pathetic state of malnutrition. Efforts have been made and continue to be made to incorporate ways of tackling these causes. But the political and administrative emphasis and interest is simply on supply of foods and creation of more administrative apparatus to channelize it. In fact in all likelihood, policy response to the publication of this dismal ranking on Hunger index is likely to be further emphasis and budgetary to support to only schemes like these. Unfortunately, more of the same is unlikely to lead to different outcomes. We need to look at out of the box approaches to address the issue in an effective manner.

There is evidence to indicate that strategies like participative learning and action have worked wonders. In this process, all young mothers weigh their own kids in public, appropriately place them in the standard growth chart, mull over the changes since the last time it was weighed and explain to the public what happened during the time to keep the child where it falls. The mother feels proud if her baby has shown improvement and a sense of failure if she does not. She starts thinking that it is in her hands to make her baby grow well.

These methods inculcate a great deal of responsibility among the parents and the community. There is no question that medical attention and treatment for overcoming illnesses and infirmities, some foods and micronutrients will still need to be given in the supply-side mode, particularly for the very poor. But a very large proportion of families do have enough food to feed their children and if they take responsibility for their growth, the overall incidence of malnutrition can only drop. What is needed is inculcating the sense of responsibility about the status of children among the parents, in-laws and the community to bring in huge changes in the sad current conditions.

The second element that would differ from the approach of the paternalistic state giving everything from take home rations before birth to meals in schools is in a similar vein. If nearly adequate quantities of nutrients are locally available, the main reasons malnutrition persists would seem to lie with inequities in distribution on one hand and ignorance or obscurantism on the other. It is possible to address both these through enlightened and responsible local leadership.

In order to bring that into action, it would be important to understand modify the structure of incentives to village community leaders at this stage. The officially recognized community leaders are the ward members and office bearers in the local Gram Panchayat (village council). These positions are today seen as positions of power with consequential rent seeking possibilities. They have no incentive to see improvement in the status of the communities as of now.

It is therefore important to alter the situation and create an ethos in which persons in these positions consider reduction of all forms of malnutrition as their signal achievement. Can this be done? Anti child labor activist Shanta Sinha has demonstrated how elimination of child labor and ensuring each child goes to school has can be made into a signal achievement of the community leaders. Reduction in morbidity and mortality of children and increase in the proportion of happy and healthy children perhaps is as tangible an outcome as reduction in children being sent for labor. It hence appears within the realms of possibility.

Competitions can be Intelligently designed in which ward members need to show superior performance in terms of better growth of children in their ward to win an award and sarpanchas or mukhias (village council chiefs) need to compete with mukhias of other villages to win an award. The winners need to be rewarded through recognition as well as a tangible personal award. Such a system would encourage them to take lead on two sides. On one hand, they will use their social standing to fight the obscurantism in families pertaining to treatment of women and to child rearing. On the other, they will use their official positions to ensure that flow of materials and services for the cause improve.

At the same time, supply side strategies are not redundant. They have their positive outcomes. But they have the insidious tendency to occupy the entire mind space of the decision maker since they bring with them inevitably issues of management of logistics and control on a huge army of service providers. They are also convenient to the unscrupulous since they involve expenditures of very large magnitudes and hence large patronage possibilities.

Finally, they provide the chance to the elected politician an opportunity of claiming that he has delivered on development. But the pathetic track record as shown by the ranking on Hunger Index despite a long experience of exclusive reliance on supply side policies has conclusively demonstrated their limitations.

Hence it is important to weave the two elements of inculcating a sense of responsibility towards nutrition of children and young mothers in the minds of the parents and families as well as creating individual level significant social, moral and economic incentives for community leaders to show progress in the overall attack on malnutrition.