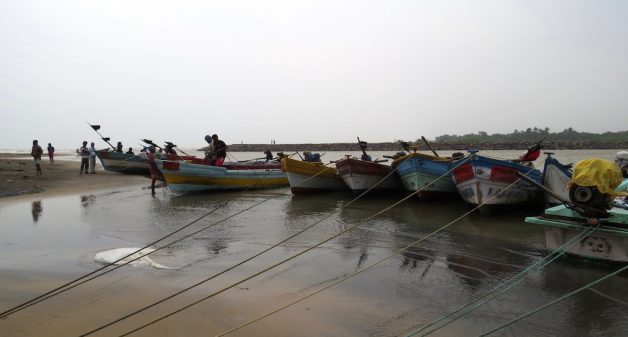 Fishermen decide to fish or not based on ocean statistics and weather forecast through the mobile app. (Photo by Jency Samuel)

“My mother used to hide the jerry cans containing diesel meant for my boat,” recalls Kadhiresan D., a fisherman from Mahabalipuram, 60km south of Chennai. “When he planned to go fishing, I would shunt between the beach and the house and ask the fishermen returning from the sea,” his mother Guna Damodharan says. If she learnt that the sea was rough, she would hide the fuel cans to stop Kadhiresan and his sibling Rajesh from going out to the sea. She was always apprehensive about her sons’ safety.

Seated on the floor of her house, Guna Damodharan, a widow, recalls instances when her sons faced life-threatening situations at sea. After the 2004 tsunami, there was an added uncertainty besides safety concerns. “Earlier we knew what fish we would get in a particular season. For example, we would get prawns in January, seer in February, mackerel in March and April and so on. But after tsunami, the sea changed so much. The weather became unpredictable. We didn’t know what fish we would get, if at all we managed to net any,” says Kadhiresan, who has been fishing for 25 years. The fishermen’s livelihood was more at stake after the tsunami.

Technology to the rescue

The tsunami gave the fishermen a positive development too. When the M. S. Swaminathan Research Foundation (MSSRF) took up post-tsunami rehabilitation work, the fishermen expressed the need for a technology-based alert and forecast system. “They felt that they could no longer rely solely on their traditional knowledge. They wanted a forecast of parameters such as wave height and wind speed, besides disaster alert. It was the time when mobile technology was taking off and MSSRF decided to use the mobile to address the fishermen’s concerns,” Velvizhi. S, principal scientist at MSSRF, told VillageSquare.in. What started as audio advisories has gradually evolved into a freely downloadable mobile application named Fisher Friendly Mobile Application (FFMA).

The FFMA gives ocean statistics such as wave height and wind speed besides weather forecast, helping the fishermen decide whether to go fishing or not. The Potential Fishing Zone (PFZ) feature, based on satellite data, gives them coordinates were shoals of fish are available. Under the PFZ, there is specific zone pointer for tuna, a much sought-after fish.

28-year-old Arunkumar P. Adhi from Kovalam, 40km south of Chennai, says that not many were interested in FFMA when MSSRF introduced it three years ago. But MSSRF collected their phone numbers and started sending audio advisories on the weather and PFZ. However, the PFZ coordinates were very far for them to reach with their small, single-engine boats. When MSSRF heeded their request and gave coordinates within 40km, the fishers netted a good catch of tuna.

“We got catch worth Rs 30,000 the first day we used the PFZ feature. We spent Rs 2000 on diesel, which meant Rs 7000 for each of us,” Adhi gushes excitedly. If the boat is rented, one share goes to the boat owner. Earlier, each would get between Rs 500 and Rs 1,000 after one fishing trip. Pradeep of Kovalam says his boat’s income tripled to Rs 5,000 per trip after he started using the PFZ feature.

After using the audio advisory for two years, Murugan S. of Kasimedu near Chennai downloaded FFMA a year ago. He is elated with the results. “I own two boats and I venture into deep sea. So my average income of Rs 40,000 shot upto Rs 1.50 lakh. I’m building a small house now,” he says happily.

Besides helping fishermen net tuna with a tuna-specific feature, PFZ has helped them catch seer, coromandel flying fish, mackerel and dolphin fish in large quantities. Naturally, increased catch translates as increased earnings for small retail fish vendors such as Kokila of Pulicat and wholesale traders such as Tony of Kasimedu.

If fishermen move to a new locality, FFMA guides them with respect to the nearest landing centre. Kovalam-based Adhi got a good catch in Karaikal, using this feature. 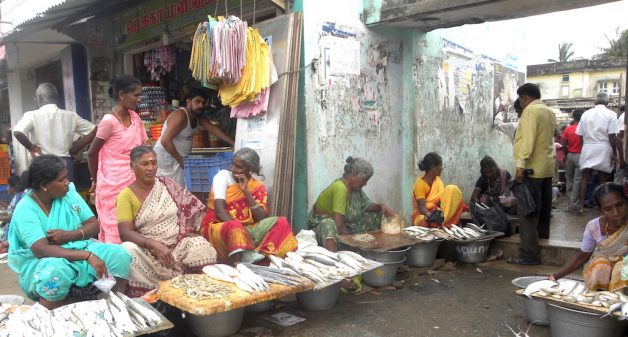 Fishmongers, who are mostly women, are indirect beneficiaries of the increase in catch. (Photo by Jency Samuel)

Soundara Pandian of Kovalam remembers the countless times that his or his friends’ boats have been caught in the rough weather and went missing for many days.

While developing the FFMA, various government and independent agencies, including the Coast Guard, have been roped in to make the app more helpful to the fishers. The app features a helpline number, in addition to Coast Guard and other important numbers for emergency situations.

“Two years back a boat with three men went missing. They left at 4 am. Till mid-night there was no sign of them. Through the MSSRF helpline Coast Guard was alerted and our friends were rescued,” recollects Chandran P. of Kovalam.

Pradeep takes pride in the unity of the close-knit community where safety is their only concern. When Kaja Mohideen went to the sea with his father and brother, a huge wave hit their boat. Having lost all their equipment, they could not seek help. “Five ships passed by. But none noticed our signal for help. We sat atop the capsized boat the entire night,” says Mohideen. After informing the Coast Guard, the fishermen also went in search. “We were rescued at 10am the next day,” recollects Mohideen.

“Now such incidents are very rare. We check the app for ocean statistics and we don’t venture into the sea, if the wave height and wind speed are more,” says Kamiston of Thangachimadam near Rameswaram. After checking the ocean statistics in FFMA, the fishermen inform the others in their village, ensuring their safety as well.

“Six years back a group of us got caught in the currents and reached Sri Lankan waters. We were presumed dead. We were lucky that Lankan fishermen saved us,” says Adhi. This concern has been taken care of in FFMA by marking lat-long coordinates of the international maritime boundary at 2-km intervals. When a boat is 5km from the boundary, the phone beeps and vibrates to alert the fishermen.

Life is looking up

The app is being introduced in other coastal states too, in their respective languages. Not only has the app helped fishermen net a good catch, improving their socio-economic status, it has assured their safety.

In Nagapatnam, Sekar who lost his three kids to tsunami, gave up fishing altogether. The sea that he revered as goddess suddenly seemed an unpredictable adversary. Sekar ran a tiny petty shop, eking out a living. Now as his wife mans the shop, he has slowly started fishing again. Relying on his friends’ FFMA, he is gaining confidence about his safety and income.

Selvi of Velankanni affirms that their financial position has improved and that she is able to afford better schooling for her children.

Kadhiresan’s average income is now about Rs 25,000 per trip. His mother and wife sell the catch to traders, instead of selling directly, to save time. It gives Kadhiresan’s wife Stella time to pursue tailoring. With pride, she shows her brand new sewing machine under the asbestos-roofed hall and poses near it for a picture. “At last my dream of five long years has come true,” she says.