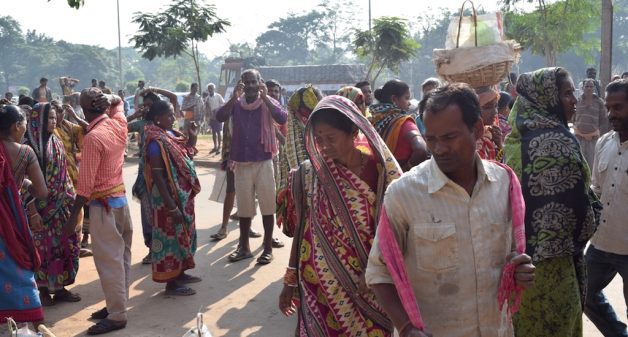 There's no work to be had for daily wage laborers. (Photo by Basudev Mahapatra)

With the sowing season for the winter (Ravi) crop in full swing, Nabarathi Kuanr, 60, of Sudrukumpa village of Kandhamal district in Odisha has no option but to skip a cropping season as he is unable to get seeds and fertilisers from the government and the cooperatives because of the scarcity of lower denomination notes after the Indian government on November 8 declared that Rs 500 and Rs 1,000 banknotes have been demonetized.

“They say the situation will improve in few days,” Kuanr told VillageSquare.in. “But, is the soil condition going to be the same and conducive for sowing till that time?”

The situation with farmers who have sold their Kharif (autumn) harvest is all the more dire because they all have invalid Rs 500 and Rs 1,000 notes in cash, which is not accepted by private businesses and even at government-run facilities.

“They are not able to avail the limited exchange facility because the banks ask the farmers for documents like Aadhaar or PAN card, which most of the tribal and backward farmers of Kandhamal district do not have,” said Panchanan Mishra, a development activist of Phulbani who works for the welfare of farmers in Kandhamal district.

Local cooperative societies and the district cooperative banks do not accept the old currency notes. And many of the farmers do not have accounts with nationalised banks to deposit the cash available with them. So farmers having cash with them are in a helpless state, Mishra told VillageSquare.in.

As somebody’s misery is an opportunity for the cunning others, middlemen have emerged to take advantage of the farmers’ helplessness.

“Because farmers living in remote villages face huge problem to walking long distances and reach a bank to exchange their higher denomination notes, some middlemen take their notes at a value discounted by 20 to 30 per cent,” says Udit Sahu, in-charge of a Customer Service Point in Dungriput village of Koraput district.

Farmers and poor people living in the rural Odisha and tribal hinterland have been severely affected by the demonetization drive because coming to the banks and getting their cash is a huge challenge for them.

Small businesses in rural Odisha are also in distress because consumers do not have the capacity to purchase even essential items due to non-availability of appropriate currency notes. “Transactions have dropped by more than 60 per cent and it has been difficult to make our livelihood,” Kalia Behera of Bhanjanagar village in the south Odisha district of Ganjam told VillageSquare.in.

The situation is even worse for people who live on daily wages. Demonetization has badly hit Basanti Marandi, who hails from the northern district of Mayurbhanj in Odisha and makes a living as a daily wage laborer.

“I don’t know if I am to get work today because labor contractors don’t hire many laborers for their work since the government has decided to scrap 500 and 1,000 rupee notes. Even if I go to work, getting wages is again uncertain because the contractors also are short of 100 rupee notes to pay the wages,” says Basanti while waiting for someone who can hire her for a day’s work.

At least 3,000 laborers gathered at Bhubaneswar’s Nayapali labor point are passing through similar uncertain fate. Migrated from almost all parts of rural Odisha for survival, the state of these laborers is symptomatic of the situation with poor people across the state.

“Only half of us get work these days because there are only selected takers and the demand of laborers has fallen due to restricted availability of lower denomination notes,” Maheswar Pradhan, another laborer hailing from Bhanjanagar village of the southern district of Ganjam, told VillageSquare.in.

Most construction work has slowed since announcement of demonetization. Real estate and infrastructure builders and contractors are unable to accommodate more daily wage laborers in their projects because of the scarcity of lower denomination currencies.

“Making payments to laborers is a big issue. While getting enough amount of 100 rupee notes is still not possible, the laborers are not interested in higher denomination notes of 2,000 rupees because some of them needs to stand in the queue for a day to get 100 rupee notes against it,” says Brundaban Dalbehera, a Bhubaneswar-based real estate developer.