Constructed under the Maharashtra government’s Jalyukt Shivar scheme to end water scarcity in the state, these structures hold no water. Some were washed away in the first rains, making a mockery of the implementation 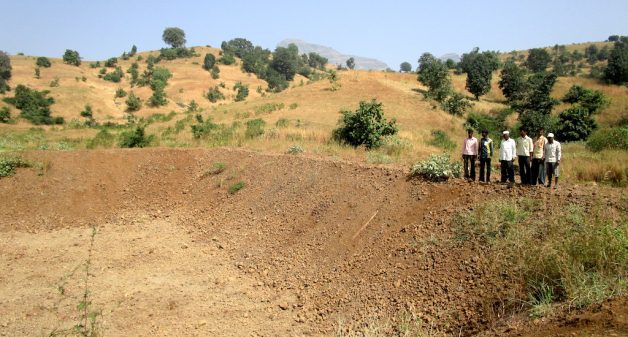 A recently dug farm pond with no water even after the monsoon rains. (Photo by Nidhi Jamwal)

On the Mokhada-Kasara road, about 5 km from the Mokhada town in Palghar district of Maharashtra, there is a semi-paved road that leads to a temple. Thereafter, walking on foot and crossing a hillock, you reach Khoch, a small village of 250 families of the MaThakur scheduled tribe. A series of farm ponds dots the landscape of the village, which is located on the boundary of Mokhada and Igatpuri talukas (sub-districts), about 170 km north of Mumbai.

“There are a total of 35 farm ponds in our village built in March this year under the Jalyukt Shivar Abhiyaan of the state government. These structures were constructed by a contractor within a period of 45 days,” said Bhaskar Bhau Somamalik, a farmer from Khoch village in Palghar, while standing next to a bone-dry farm pond. Two years ago, Palghar, an adivasi district, was carved out of the larger Thane district of Maharashtra.

According to Somamalik, all the farm ponds in his village were poorly planned and hurriedly constructed. Within a month of the withdrawal of the monsoon, these structures have completely dried up. Some were washed away in the rains.

“Half my farm pond is already broken. I have already fought with the contractor and also given a letter to the tehsildar (revenue officer) requesting for its repair, but no one has come to fix it,” said Madhukar Bhau, another fellow farmer from Khoch.

A farm pond is a large hole dug out in the earth to harvest and store rainwater for future irrigation use in the fields. The construction of farm pond depends on the local soil, topography and weather conditions. In order to avoid water seepage into the ground, farm ponds are often lined with a thick black plastic sheet. If constructed properly, farm ponds can drought-proof villages and help the farmers get an additional rabi (winter) crop a year.

Under the Jalyukt Shivar programme of the Maharashtra government, which plans to drought-proof the entire state by 2019, a number of soil and water conservation activities are being carried out. These include compartment embanking, deepening nullahs, desilting tanks, cement bunds (embankments), etc. Farm ponds are also an important part of this target-driven scheme, as per which about 5,000 villages had to be drought-proofed by the end of March 2016. These included 51 villages from eight talukas of Palghar, including 14 villages of Mokhada taluka.

In the state budget for 2016-17, Rs 2,000 crore has been allocated for the construction of farm ponds to drought-proof villages.

Khoch village is located in Mokhada taluka that receives 2,455mm of annual average rainfall, but faces an acute water crisis during summer. The hilly terrain and basalt formation in Mokhada does not let water seep in. The entire rainwater is washed away in no time. Rivers, such as Pinjal and Surya, originate in the hills of Mokhada, but are not perennial. Farmers of Khoch are able to only cultivate a monsoon crop due to lack of irrigation. (Photo by Nidhi Jamwal)

“Farmers in Khoch barely own 2-3 acres of land and practice subsistence farming to feed themselves and their families. Post monsoon, they migrate to cities in search of work and return only around Holi (March),” said Chetan Shevale, who works with Aroehan, a Mokhada-based NGO that works with the local people on water and farming issues.

Nearby, there is Khoch reservoir built on a local stream, which is an irrigation project, and has an underground network of pipelines to provide water for irrigation during the rabi (winter) season. But, Khoch dam is not of much use to the farmers of Khoch village.

“Khoch dam had to irrigate 125 acres of land of 72 farmers. But, some years ago, the underground pipeline broke and hasn’t been repaired yet. At present, only 25 farmers are able to irrigate 30-35 acres of their land through the Khoch project,” Vadu SakruBhau told VillageSquare.in.

The farmers who receive irrigation water from this project pay Rs 1,500-2,000 (locally known as paani patti or water charges) to the local administration to irrigate 1.5 acre land between January and May every year. Others have no choice but to sit idle during the rabi season, or migrate to the cities.

Farm ponds, built under the Jalyukt Shivar, could have been successful in drought-proofing Khoch had they been constructed by taking into consideration the suggestions of the farmers, who know the local terrain and the flow-path of rainwater. Farm ponds have successfully drought-proofed villages and helped several farmers across the country.

A farm pond can be built on one-tenth area of the total farmland. A pond in the standard size of 100ft x 100ft x 10ft can store water that is enough to irrigate up to four short crops in five acres in six months. But, disregarding the concerns of farmers has lead to creation of dry white elephants in Khoch village, which is also a criminal waste of the public funds.

“Firstly, we never demanded farm ponds. The contractor took 7/12 (land record) of our farmland from the tehsildar and directed us that farm ponds would be constructed at so and so site. If we questioned, we were threatened that in future no other government scheme would be sanctioned for us,” said MadhukarBhau.

When the construction of farm ponds started, several farmers gave suggestions to the contractor, but he refused to listen. “We know our land and its topography. When it rains heavily during the monsoon, we know which way water will flow,” said BhaskarBhau. In spite of repeated warnings, the contractor built farm ponds right in the way of seasonal waterflow. No wonder, some farm ponds got washed away within the first rains, alleged BhaskarBhau. Also, none of the farm ponds in Khoch are lined.

Faulty farm ponds are not limited to Khoch alone. “Several other villages in Mokhada are facing the same problem though Khoch has got the maximum number of farm ponds. These ponds have been randomly dug up and there is huge corruption in the entire exercise,” said Hanif Shaikh, a local reporter who has been tracking the works carried under Jalyukt Shivar in Palghar.

According to H M Desarda, an economist and former member of the Maharashtra State Planning Board, “There is a big concern in the way Jalyukt Shivar is being implemented across in the state. There is no participation of the local farmers and non-scientific works are being carried out causing irreversible damage to the environment.” Rather than drought-proofing the villages, Jalyukt Shivar is creating more problems for the farmers.

Lack of ridge-to-valley approach and mindless digging of ponds and streams has disturbed the aquifers, alleged Desarda. He has already filed a public interest litigation in the Bombay High Court against the unscientific works under Jalyukt Shivar. Desarda is also demanding an independent assessment of all the works carried under this flagship scheme by experts of hydrology, hydrogeology and river morphology.

Abhijeet Bangar, the collector of Palghar, claims to have changed the design of the farm ponds scheme to suit the local farmers. “We will no more involve contractors in digging of the farm ponds. Farmers would be paid directly to dig their own structures. Apart from Jalyukt-Shivar and the tribal sub-plan budget, we will also use the MNREGA (Mahatma Gandhi National Rural Employment Guarantee Act that ensures 100days of work to all poor rural households on demand) to construct farm ponds, which will also provide livelihood to the local people,” he said. Bangar also plans to promote pisciculture (rohu and catla) in the farm ponds, which can provide an additional Rs 10,000 to the farmer within five-month period.

Nidhi Jamwal is a journalist based in Mumbai. She tweets @JamwalNidhi.