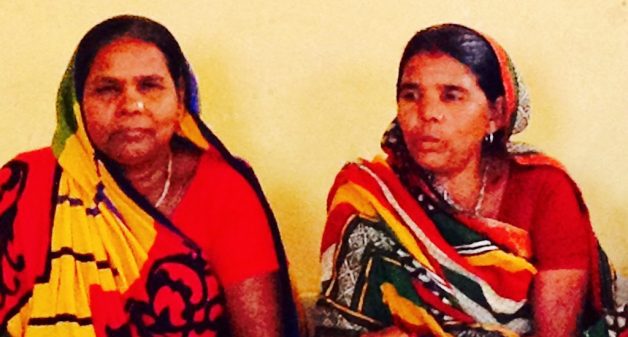 Runa Devi and Daya Devi of Kaladinda village in southeast Bihar have emerged as village leaders. (Photo by Suneeta Dhar)

Runa Devi and Daya Devi are not sure of their age nor can they recall the age they were married. Neither had been to school. Yet their lack of education did not stop them from managing, along with a group of other village women, a Rs 130 million project to build a watershed to serve Kaladinda and the neighbouring villages.

The Kaladinda village in Kolhasar Panchayat of Katoria administrative block is located in Banka district. The district, established in February 1991, is situated in the southeast corner of Bihar. It consists of 11 blocks and two towns — Banka and Amarpur. A lack of education, road links, electricity, irrigation, sanitation and access to health remain key concerns for Kaladinda.

Runa and Daya successfully supervised a watershed project developed in 2008 that has now been completed. Watershed management projects are aimed at creating and implementing plans to sustain water supply, drainage and water rights to landowners in consultation with communities. Traditionally, men are engaged as key stakeholders in these projects where land is registered in their names.

Runa and Daya broke this gender stereotype when they became leaders in this enterprise. They were the treasurer and secretary of a 12-member Village Watershed Committee comprised of representatives from the 12 villages that would benefit from this resource.

“Even though I cannot read or write, I supported and monitored the building of small ponds, embankments and digging works.  Each day I would measure and audit the quality of the work undertaken. I was the signatory for this large project.  We hired an accountant to reconcile the project finances on a daily basis,” Runa told VillageSquare.in. “I did this work for the larger good of our society.  It benefited so many of us.  We are all able to grow vegetables now and we can sell the crop in the market.”

The watershed project has benefitted over 350 households in the 12 villages it serves.  “Through better irrigation processes, my community has improved its nutrition and our quality of life,” Runa says. “I earn more today than I did before the water resources were developed.  I now sell paddy in the local market.”

Daya feels much the same way. “Before the development of the watershed, our agricultural productivity was limited to a single crop a year,” Daya told VillageSquare.in.  I have five children and we did not have enough to eat.”

As treasurer of the Kaladinda self-help group (SHG) that secured the contract, Runa ensured that there was no corruption.  “Nobody benefitted personally through cuts and commissions from the large funds that were deployed.” Runa and Daya demonstrated the ability and power of non-literate rural women to manage, develop and deploy rural assets if they are given the opportunity to lead the process.

Runa, Daya and members of the SHG drew upon the support, training and assistance of Professional Assistance for Development Action (PRADAN), a grassroots non-profit committed to inclusive development. PRADAN has a long history of working on rural livelihoods in the region and other parts of India’s most vulnerable districts.  Pranjal Sakia, District Cluster Integrator of PRADAN and his team supported the design and development of this project.

NABARD provided support for watershed development to 80,000 hectares in the region under the aegis of the Integrated South Bihar Watershed Development Programme.  The 1050 hectares covered by the Kaladinda SHG is the largest of the watershed projects in the district. Five more projects in four contiguous areas have also been developed by PRADAN where women’s SHGs have played key leadership roles and learned from one another.

Runa, now in her late fifties, sees herself as a farmer, an engineer and a finance manager. Though she comes from a conservative Other Backward Classes community in southeast Bihar, she has made changes in her home, family and community to assert women’s equality.  She was able to achieve the transition from being an invisible and unacknowledged farmer and housewife to become a village leader.  This was possible because she is a member of the Jagriti Mahila Sangh, a women’s federation nurtured over the last 10 years by PRADAN and dedicated to building women’s collective power.

Runa was among the first group of women who became members of the SHG 15 years ago.  She recalls how she would put Rs 5 into the group savings to draw upon the fund in times of need.  The money she was able to borrow enabled her to break her dependence on the village moneylender.  At that time she was so poor she had to rely on collecting small forest produce and worked as a daily wage labourer when work was available.

After four years, the initial contribution to the group fund rose to Rs 10 a month. Runa was able to contribute this larger sum as she could save more through improved agricultural methods she learned. She was better able to provide for her family and had additional produce to sell in the market.

Whereas the watershed project was to directly benefit small landholders like her and Daya, additional labour was needed for the works to be undertaken. For the construction of the watershed the team mobilized 10 per cent of the landless farmers from their own village and more labour from surrounding villages within their Panchayat.

Supervising this project gave Runa and Daya tremendous confidence.  Runa along with other members of her SHG would go to the bank in the district town to withdraw money from their SHG account to pay for project labour and other expenses.  “We would carry thousands of rupees in our saree pallus and we would either walk back to our village or take whatever transport we could find to get back to our homes as our village is not well connected to the main roads.”

A year and a half ago Ruma was nominated as a board member of the Jagriti Mahila Federation. She currently works with other women in her Village Organization to demand a school to be located in their village. While she regrets that her seven children are not literate, she is proud that all her grandchildren go to school. Three of her children work in Delhi in the informal sector.

She is now keen to get water and sanitation facilities for her community.  Though she knows her entitlements and her rights, Runa still has to struggle to attain them.  A single widowed woman for the last 10 years, she has an Aadhaar number and other identity cards, but is unable to access her widow’s pension.

Daya’s seven children also have had limited schooling. Daya’s daughter lives with her because she was turned out of her marital home.  In Banka District, even victims of violence are not welcomed back to their natal homes. The girl’s parents try to negotiate with the boy’s family to fix the problem. “However, I decided that my daughter would not suffer anymore.  I will help her in any way I can,” Daya said with conviction.

Runa Devi and Daya’s stories underline how important it is for rural women to attain the necessary technical training and functional literacy to access government programmes and funds. Poor rural women, with support from an organization committed to empowering them through collective action, can make major contributors to the rural economy. Runa and Daya, though they still do not have title to land, are transforming the rural landscape and are blazing a trail for other women in the area to become leaders.