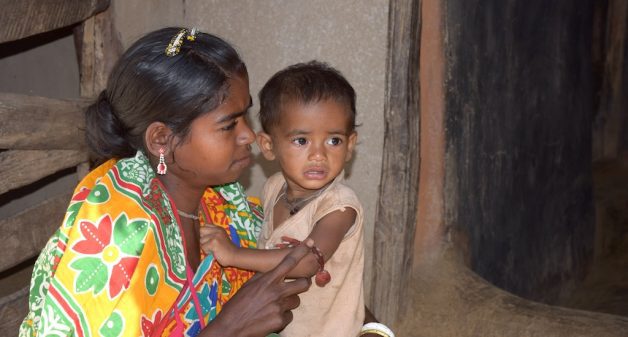 Chumudi Madkami of Palkonda village in Malkangiri with her malnourished son Aditya. (Photo by Basudev Mahapatra)

“Following vomiting and symptoms that made my 3-year-old daughter, Julie, feel uneasy, we took her to the district headquarter hospital in Malkangiri. We never knew that it was her final departure from the village. She succumbed to a new disease that the doctors said was Japanese fever (Japanese Encephalitis),” says Chumudi Madkami of Palkonda village while holding her visibly weak one-year-old son Aditya.

Less than 20 km from Malkangiri district headquarters, Palkonda village lost 10 of its under-five children to suspected diseases like Japanese Encephalitis (JE) and Acquired Encephalitis Syndrome (AES). This was the highest casualty in any single village in the district that saw the death of at least 103 children between September and November, official data show. Of all deceased children, “37 died of JE – a mosquito-borne flavivirus related disease,” Dhanurjay Mohanta, malaria officer at the district headquarter hospital (DHH), told VillageSquare.in.

At least 180 villages in seven blocks of the district in the south-east corner of Odisha and Malkangiri town were affected by the afflictions, according to a health ministry statement presented in the Odisha legislative assembly.

The government and district administration, which woke up late as the number of casualties kept rising, first isolated pigs from human habitations, believing that the farmed animal remained the primary source of the virus. But, despite this, the diseases couldn’t be contained till the toll crossed 100.

However, “we don’t believe, this is the primary reason behind the disease and deaths resulted from it because people in neighbouring villages remained unaffected despite having pigs near their houses,” Chumdi said.

A team of researchers led by Jacob John of the Tamil Nadu based Christian Medical College and Hospital insisted on the theory of toxic infection due to consumption of the beans of a plant called bana chakunda (Cassia occidentalis).

People of the villages affected by AES and JE, however, did not accept such a claim. “We used to consume the beans during our childhood when there was acute food shortage in the district. But, since about a decade, no child, nor even the adults, consume these beans,” Bira Khobasi of Palkonda told VillageSquare.in. 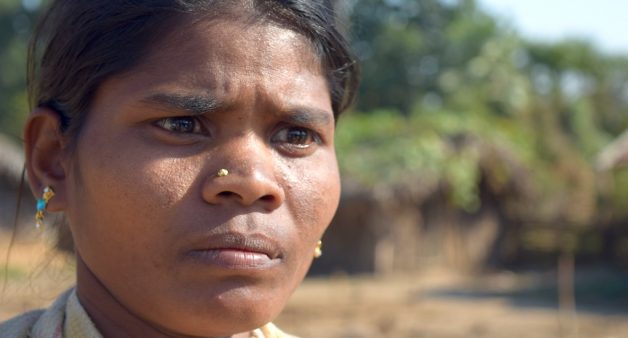 All 10 children of Palkonda, who succumbed to JE or AES, were undernourished and underweight. “A few children of the village who were healthy and properly nourished could recover from the infection,” Bira said.

“The infection and most of the deaths occurred in the tribal villages where malnutrition is acute. Over 90% of the deceased were visibly undernourished,” said Durga Tripathy of Harmony, a Malkangiri based non-profit working in the public health sector.

There is a strong relationship between malnutrition and infection and infant mortality, because poor nutrition leaves children underweight, weakened, and vulnerable to infections. Five infectious diseases—pneumonia, diarrhoea, malaria, measles, and AIDS—account for more than one-half of all deaths in children aged below 5 years, according to the Oxford Journal. “The association between under-nutrition and adverse outcome could be extended to the patients with confirmed/probable viral encephalitis,” highlights an expert study published in the BioMed Research International Journal.

Having a population of 80,000 under-five children, Malkangiri sees the death of over 1500 children every year. So, on an average, more than 100 children die every month in the district. “Even though there was no JE or AES outbreak last year, the number of deaths of children between September and November 2015, remained the same as in 2016,” said Mohanta, suggesting that there was no excess mortality this year.

This indicates, while JE or AES follow a biennial cycle, almost equal number of children die of under-nutrition related diseases like diarrhoea, malaria, pneumonia and alimentary disorders, which are endemic in the district of Malkangiri.

“So, the primary reason behind the death of so many children within such a small span this year in Malkangiri seems to be acute malnutrition, which weakened the immune system among children and magnified the effect of the virus that caused AES and JE,” Mira Shiva, steering committee member of People’s Health Movement, India, told VillageSquare.in.

With seven out of every 10 children happen to be underweight in Malkangiri, according to the 2014 Annual Health Survey report, the district ranked third in the country among 100 districts having the highest prevalence of malnutrition among children under the age of five.

Nearly 33.4% of children being under the wasting category, infant mortality rate in Malkangiri for the 2015-16 remained 53 per 1,000 child births, according to sources in the district unit of NRHM. “Child mortality in the district is primarily ruled by malnutrition,” an NRHM official said on condition of anonymity.

With vaccination programme in full swing, the threat from JE and AES is fading out. But, “increasing number of malaria patients are now coming to the hospitals in Malkangiri,” said a pharmacist at the DHH. 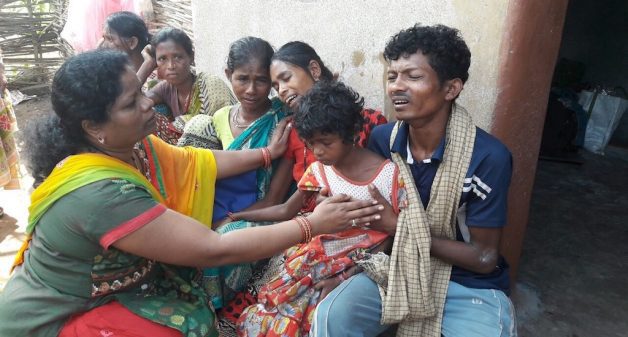 Several programmes implemented by the government for the nutritional safety of children and pregnant as well as lactating mothers are in a state of disarray across the district.

“The Anganwadi centre (village unit under the Integrated Child Development Scheme) was not opening regularly as the worker in charge of it used to live in a different village. Food and other items supplied to the centre were not distributed to all children and mothers regularly. It was only after the outbreak of JE and AES that the Anganwadi worker supplied cooked food to every child,” said Nande Madi, who lost her infant daughter to encephalitis.

“Children who were late in reaching the centre were not being provided with food,” said Bira Khobasi. As the diseases are contained now, the Anganwadi (crèche) worker has again become irregular in providing cooked food to children the children at the centre, said Idma Madi, a middle-aged villager.

Despite the fact that two of the children in the village are severely undernourished to be in the red zone and most other in the near-red zone, none from the village has ever been referred to the Nutrition Rehabilitation Centre at the DHH.

Even the book that records health, weight, immunisation and growth status of newborn child and mother is not being given to the parents. “The Anganwadi workers keep it with themselves because the parents may not keep the records safe,” Mohanta said to justify the practice.

“When the ICDS programmes are a complete failure in the district, lack of awareness among tribal communities exclude them from fetching benefits of other welfare programmes,” said a Malkangiri-based social activist K. Deshraj Achary.

“Poverty, hunger and lack of awareness at the community level make Malkangiri a larger stage for malnutrition deaths. The situation here is more severe than the much-hyped Nagada where 19 children died in a period of three months because of under-nourishment. The district sees thousands of malnutrition deaths in a year. People’s reach to health facilities is largely restricted due to lack of roads and connectivity,” said Gouranga Charan Mohapatra, State Convener of Jana Swasthya Aviyan, who travelled across the district to study the situation in the wake of JE and AES outbreak.

As Malkangiri is one of the left-wing extremism (LWE) affected districts, official visits by the administrative officers to verify implementation of welfare programmes are largely restricted by the standard operating procedure (SOP) they have been asked to follow since the case of abduction of a collector by the armed Maoists in 2011, according to a district collectorate official who declined to be identified.

This is a warning call for the government to strengthen its intervention in the district and see that the welfare programmes work properly and nutritional safety ensured. It needs to think beyond just announcement of programmes and policies and focus on their implementation, said Narendra Gupta of Prayas, a non-profit promoting individual right to health in India.

These deaths, widely suspected to be due to malnutrition, should not be happening in the India of 2016, least of all in a state so rich in natural resources, said Neerja Chowdhury of Citizens Alliance Against Malnutrition, India. “Tribal children are at the bottom of the heap of the most vulnerable in our society,” she said. “Malkangiri was a grim reminder that the time had come now for state governments and NGOs and funding agencies and the media to focus now on the malnourished amongst the tribals on an urgent basis.”