It’s much better to dig than to build for water

Learning from some exemplary instances in drought-prone Marathwada, it makes sense for government programs to dig tanks and deepen streams for water sufficiency instead of building expensive structures 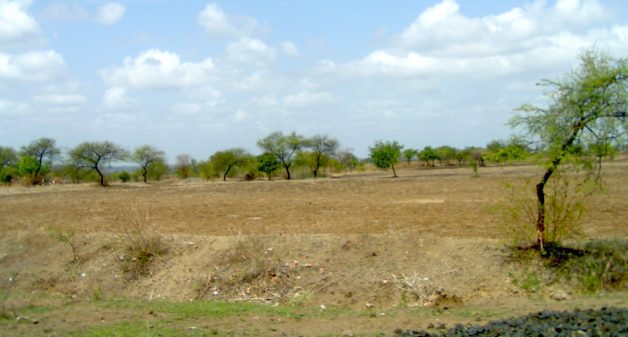 Marathwada suffers from a chronic shortage of water and rainfall is often scanty. (Photo by Harini Calamur)

Some remarkable though sporadic lessons are available from the drought-prone Marathwada region of Maharashtra. The region had come into focus last summer because of the acute water scarcity on the back of three successive years of poor rainfall. Pictures of the water express from Sangli to Latur published by several newspapers may still be vivid in peoples’ minds. This train carried 2.5 million liters in each trip.

Many organizations and private philanthropies came forward to support the drought-affected people. The state government announced a major program called Jalyukta Shivar to move towards drought proofing of the region. This program is aimed at creating a large number of water harvesting structures — farm ponds, widening and deepening of stream beds, etc.

There are excellent examples of some wonderful work that has happened alongside Jalyukta Shivar, particularly in interventions led by civil society organisations.  The most important lesson of all these efforts has been that it is a far superior idea to dig rather than to build.

In the year 2013, which too saw a major drought in the region, civil society organizations supported by a little-known group called Caring Friends of Mumbai did huge work on reclamation of a pond in a place called Jeevrekha in Jalana district of Maharashtra. While they contributed labor to mobilize community interest, they used machines to de-silt a large pond.

The silt at the central deep portion of the pond was dug up using machines. Farmers enthusiastically carted it to their farms since they saw it as good fertile soil. A local farmer took tremendous interest and became a shining example of community leadership. The result was that the site was able to supply water during the 2015 drought year to seven villages to the tune of 1.1 million liters every day, about half the quantity that the infamous water train was delivering with so much fanfare to Latur. And no one heard of this initiative because there was no fanfare. Is that because we do not like to hear things which have gone well?

During 2015, Manavlok, an organization that has a presence in over 200 villages in Beed, one of the worst affected drought-prone districts of Marathwada, did some very good work. At Patoda near Ambejogai, they rejuvenated the Holana River and all of its tributaries. This was done using a lovely and cheap technique called the Doha model. This model tells us how many water conservationists have missed a neat trick in the past.

Till very recently in the past, water conservation would mean building check dams. The number of check dams to be built and the distance between check dams is determined by the slope in the stream and the flow. But every effort and every rupee were directed towards building. This is very interesting for everyone: contractors, engineers, and politicians. They all can claim that they have put in the hard effort to build things that will hold water, all the while incurring fairly large expenditure with the usual division of the spending, which we will not discuss out of politeness.

What was done in Patoda is the reverse. They dug. They dug the entire streambed from more or less its origin for over 5 km. The digging was systematic. A stretch would be dug for say 100 meters. Then some length, say 10 meters, would be left alone at the original level. Then again a stretch would be dug, and so on. The same was also done for its tributaries.

The rubble that comes out when you dig can be piled along the sides and roads get built with it as also the useful part of the silt can be put back in farms. The 5 km stretch, which the group handled, has cost merely Rs 8.4 million. The entire river is now full of water. The silt having gone, the standing water body is able to recharge the wells around the stream and this has improved the ground water regime all around the place. Several wells, which people said were without a drop of water, are now full to the brim.

An even more remarkable sight awaits you if you travel to a village called Moha. Here a large pond of an area of several hectares has been de-silted. The pond was made as a percolation tank in 1972 and no one had looked at it since then. The silt deposition in last 40 years was deep and had clogged all the subsoil percolation channels. As a result, even the wells right below the wall of the percolation tank had no water last year. The quantum of silt removed in 2016 was huge. Silt was dug up using machines and carted by farmers to their farms. They paid for the cartage. As many as 150,000 tractor-trolley loads of silt was removed and deposited on farms.  Over 500 hectares of land has got new soil in it.

Evidence of fair implementation of the Jalyukta Shivar program is available from many places in this area. The evidence is superior when a specific project focused on streambed deepening and widening. There is no question that an alert and interested community when mobilized will make full use of such schemes. But digging interventions will, in any case, create scope for water storage and if improving water storage to boost groundwater regime is the key end, then most schemes of the program can be said to have served their end to an extent.

The summary inference is this. In several situations, it is far more important to dig rather than to build. Building has the only advantage of visibility. Building takes up huge sums, has a large scope for defects, can get washed out with flash floods or large runoff, can cause submergence and so on. Digging has none of these dangers; contributes in a major way to farm productivity by enriching the soil, recharges groundwater and makes the region more sustainable.

The best part is it is so much cheaper. Thus you can dig to build the local farm economy. But as often the tragedy is, cheaper solutions are not popular with policymakers. Large-budget schemes can be loudly announced with pride and a great show of concern for the poor. Cheap schemes make the policymaker look stingy.

Jalyukta Shivar focuses on digging —deepening and widening of streambeds, doing farm ponds and so on. While dishonest contractors and indifferent users may cause some of the interventions to become ineffective, and there are reports that many farm ponds have been done badly, on the whole, it has been much less wasteful than most others programs.