Despite long neglect, the dhak might be getting a new lease of life as women have stormed a male bastion and have taken up playing Bengal’s traditional big drum 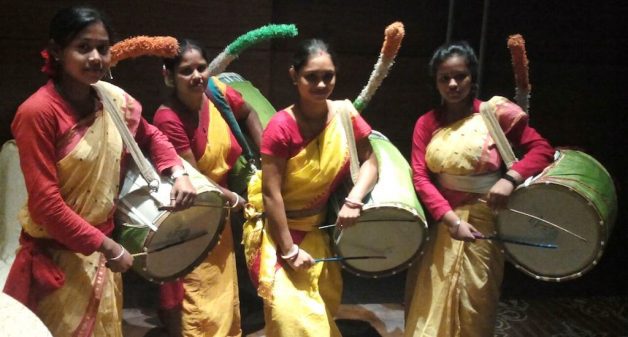 Women have started playing the dhak, a big drum traditionally played only by men. (Photo by MotilalDhaki.com)

This Durga Puja was momentous for 23-year-old Promila Das of Machlandapur village of North 24 Parganas district in West Bengal. The newlywed Promila created a stir of sorts in this sleepy hamlet — where a woman’s existence is largely confined to home and hearth — when she travelled to Delhi to play the dhak. Dhak is a big drum traditionally played during religious festivals in Bengal. The drummers are called dhakis.

“I am the first girl in my family to play the dhak or sit in an airplane,” a beaming Promila told VillageSquare.in. “To me, my biggest accomplishment was the opportunity to play the dhak at a big Durga Puja pandal in the capital and the appreciation that I received there.”

Girl power adds to the beat

Sitting in the two-storied house of her famous uncle, award-winning dhaki Gokul Chandra Das, Promila credits Gokul for her new innings that started in 2010. The unplastered walls of the room are adorned with photographs and certificates that depict Gokul’s rise from a regular dhaki to an award-wining artist, sharing stage and spotlight with the likes of sitar virtuoso Late Pandit Ravi Shankar, tabla maestro Ustad Zakir Hussain, and his mentor and eminent percussionist Pandit Tanmoy Bose.

Gokul’s brick and mortar house is not just a sign of success in the neighborhood that houses 200 odd dhaki families in tin-roofed, mud and brick dwellings but also a harbinger of changes.  It was here in this house that Gokul, fresh from a concert in Los Angeles, decided to train the women in his family and neighborhood to play the dhak. “I had gone to a music store in LA to buy a saxophone. There I was taken by the adeptness of the shop girl who played a variety of instruments including guitar, drums, flute, saxophone, etc., for demonstrating it to the customers,” says Gokul. “I thought to myself, if this woman can play so many instruments, then why couldn’t the women of my village play the dhak?”

His idea was met with a lot of initial resistance, but he was soon able to convince a few families when they saw that Gokul was starting off with his own kin. Gokul began by training his niece, daughter-in-law and three other neighbors.  Recalling those early days, Promila says, “In the beginning, it was really tough. We had to put up with a lot of gaping eyes and barbs when we started playing. However, perceptions started changing with our women troupe’s success. Tongues stopped wagging when people saw that we were being invited by big puja organizers in Kolkata, lauded and appreciated. The moment of pride happened when people saw us play on the television.”

Currently, there are around 30 female dhakis in Gokul’s troupe. His 14-year-old daughter Songita started playing the dhak six months ago and also debuted at this year’s Durga Puja pandal.

Next door, 32-year-old Jyotsana Das says her life has changed since she started playing the dhak six years ago. “Dhak has boosted my confidence. It has brought me respect and economic independence,” says Jyotsana, who also moonlights as a tailor, earning some Rs 40-50 a day.

A dozen houses away lives Lakshmi Das, who too plays the dhak.  Standing at the door of her one-room dwelling along with her husband Shankar Das, a talented dhak player, Lakshmi says, “Dhak has given me an identity of my own. People now regard me as dhaki Lakshmi Das and not just another housewife. I get invited by big puja organizers not just in West Bengal but also outside the state to perform.” Shankar played at a Durga Puja pandal in Hong Kong this year. He sells lottery tickets during the rest of the year to support his family. 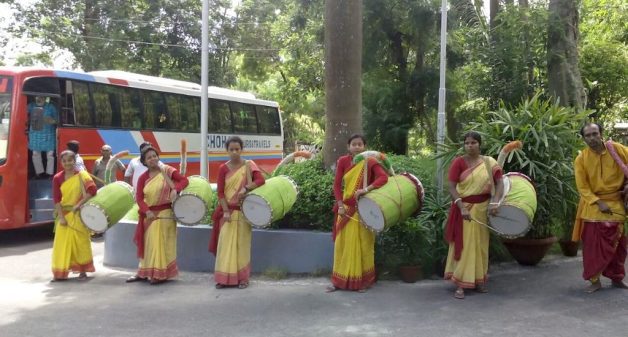 Women dhakis are stepping out of their home and hearth to play the drum. (Photo by MotilalDhaki.com)

The women dhakis feel proud of their professional achievements. They say it has given them a voice and a sense of fulfillment. Every evening, the women practise at Gokul’s house for an hour. “It’s the best time of the day. Playing dhak gives us a liberating feeling. We plan our housework in a way that we don’t have to miss the rehearsals,” says Jyotsna.

Their mentor Gokul swears by their dedication and tenacity to perform well. “They are no less than men in playing the dhak and can give many of our male dhak players a run for their money,” he says.

Although one of the oldest percussion instruments of Bengal, dhak never got treated at par with the tabla, pakhwaj or mridangam. Dhakis have remained deprived of the respect and status accorded to other traditional music practitioners. One of the main reasons is that the dhak, despite its distinctive sound and folksy charm, could never step out of the realm of pujas. “The lifespan of a dhak and a dhaki is the five days of the puja. They cease to be artists after the pujas. Nobody cares about them for the rest of the year,” Tanmoy, who has spearheaded and been involved with some successful music projects to promote and popularize folk art including the dhak, told VillageSquare.in.

Also, being a lineage-based tradition, like many other folk artistic traditions, the expertise is passed on within the family and the discipline or formal training that classical music requires is lacking.  “Even the most talented of dhakis do not know the classical taals or the grammar of music to be able to play along with other classical instruments and genres,” says Tanmoy.

The other big reason cited by experts is that the Dhak has not seen any real innovation or experimentation in widening its repertoire.  “A wider scope for dhak will ensure that the dhak can have a life beyond the pujas. Like other percussion instruments, it can become part of rock bands (a few Bangla bands have been incorporating them), musical troupes and marching bands etc so that like other musicians dhakis too can live off their art,” says French percussionist and lead player of a Latin jazz band Emmanuel Simon, who holds a Masters of Instrumental Music from Rabindra Bharati University in Kolkata and is now pursuing his PhD on Bengali folk percussions.

Emmanuel cites the example of Gokul, who is managing to keep the dhak beating even after the pujas. Gokul has an orchestra band named after his father, MotilalDhaki.com, which performs at cultural programs, weddings, corporate events, etc.

Prasanta Ray, sociologist and Professor Emeritus, Presidency University, attributes the modest status of dhak to its lack of versatility.  “I think that the limited artistic possibilities of dhak are what give the dhakis temporary audio-visibility. In contrast, say a folk genre like baul can develop and respond to multiple points of contact and lend itself very well to other genres,” he told VillageSquare.in.

The dhaki community continues to be at the lower echelons of society. Driven by poverty, illiteracy, and absence of prospect of a career in music, the community is forced to live on the fringes.  Most of the dhaki concentration is in the villages of Murshidabad, Hooghly, Malda, Bankura, Malda, Purulia and North 24 Parganas districts of the state. Barring a few leading men in the community, including Toton Das of Murshidabad’s Banschator village, Kirin Byath, Naresh Kinnor, Nikhil Das of Cooch Behar’s Borodanga village, Singhijani village, and Shibpur village respectively, the rest live the life of small-time farmers, weavers and daily wage laborers.

“Few dhakis are doing well like me. I travel the world, get put up at premium hotels and win accolades but even today most talented dhakis consider themselves lucky if they get a modest accommodation,” says Gokul Das, whose biggest moment was playing under Late Pandit Ravi Shankar at Hollywood Bowl. “It is difficult to support a family on a dhaki’s earnings, which on an average ranges between Rs 2,000 and Rs 7,000 during the puja season. For highly accomplished players, the amount could double. To make a living, most dhakis farm, do odds jobs or ply van rickshaws.”

Understandably, the younger generation is not too keen on following their elders’ footsteps. Shankar and Lakshmi’s only child, Shiuli, does not want to be a dhaki. “I would rather teach or work in a private firm. I have seen the struggles my parents have gone through. I don’t see any respect or money in this profession,” says 12-year-old Shiuli, who studies at the local government school. Jyotsana’s children do not want to take up the dhak either.

Gokul and Shankar cite lack of respect, opportunities and poor pay among the top reasons that are keeping away the younger generations from families of the traditional players from pursuing dhak.

The last one decade has seen the dhak plodding its way into the mainstream with some music maestros including legendary Hindustani classical vocalist Pandit Ajoy Chakrabarty and eminent tabla players Tanmoy Bose, Bickram Ghosh and Mallar Ghosh training, promoting, and including dhakis in their musical troupes. Corporate sponsorship of dhak competition and awards are also drumming up interest. Also, a strong diaspora has created demand for dhakis to play in puja pandals and cultural programmes overseas.

More importantly, the leading dhak players and now the women dhakis are showing the way in their villages to youngsters. Their fame, improved lives and travel are helping bring a few youngsters back to the fold. “Some of the kids who earlier did not want to learn now want to join my troupe and also find out the process to get hold of a passport. The foreign travel is what attracts the youngsters most,” reveals Gokul.

Gokul plans to establish a dhak institute where interested students can learn the art. He is also keen on having a book on dhak bol (beats) written so that what has remained within the families and has only been orally transmitted from one generation to another gets documented for anyone interested to be able to access it. “We still have a long, long way to go. Government should step in soon to save this art form,” he says. “I will die a happy man if in my lifetime I can see the dhak getting the same status as a tabla or khol.”

Tanmoy says it will happen only “when the educated, middle class takes up dhak.”