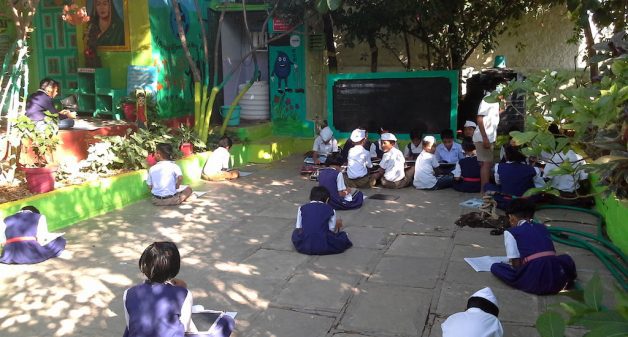 The concept of everyday school has many takers in Kardilwadi. (Photo by Gouri Agtey Athale)

Raghunath S. Kardile is an alumnus of the hamlet’s primary school. As an alumnus, he’s doing his bit to support the effort to run a primary school that does a lot more than teach children up to class IV.

“I didn’t get much education beyond the primary school,” said the elderly Kardile, without any great sense of loss. But he’s paying the electricity bill of the spruced up, refurbished and relocated (since his time) primary school that a couple, Dattatray and Bebinanda Sakat, have devoted their lives to. For the couple, Kardile is the go-to person when they need any expensive item for the school. They don’t approach the government, the village council chief or the gram panchayat (village council). All they need to do is ask Kardile.

Welcome to Kardilwadi, population 2,200, about 64 km from Pune off the Pune-Ahmednagar highway. The hamlet is about 5 km from the industrial hub of Ranjangaon, which has given the area high visibility, thanks to all the multinationals located at Ranjangaon. The prosperity visible in the village is thanks to lands sold to the state government and the jobs that have come their way due to industry.

Kardile is a now a contractor, supplying stone from his quarries to industry at Ranjangaon, with a fleet comprising a couple of diggers, earthmovers, tractors and cars. His employees, the families who have relocated here from other districts of Maharashtra, also chip in to pay for facilities in the school.  The school has become a village project, occupying a place of pride.

The primary school is yet another example of innovation in education in a state where 19th century poet and social reformer Savitribai Phule along with her husband Jyotirao Phule founded the country’s first women’s school at Bhide Wada in Pune in 1848. Her 186th birthday was celebrated on January 3.

The primary school is run by the Zilla Parishad (ZP) so it is a government school but there’s nothing government about it. First of all, it’s colorful. The walls are all painted a bright green and yellow, not the dull yellow ochre and orange that marks a government school. The walls and doors are covered with colored drawings and paintings of flowers, animals and birds and, of course, famous sons of India. It could easily be mistaken for a home, with trees in the small front courtyard providing shade under which classes are held.

But that’s not the only unusual aspect of this award-winning school. It runs all seven days of the week, working on co-curricular activities on the half day Saturday and all of Sunday that comprises their weekend. The teachers come and so do the students, to learn singing, dancing, reading books from the library. 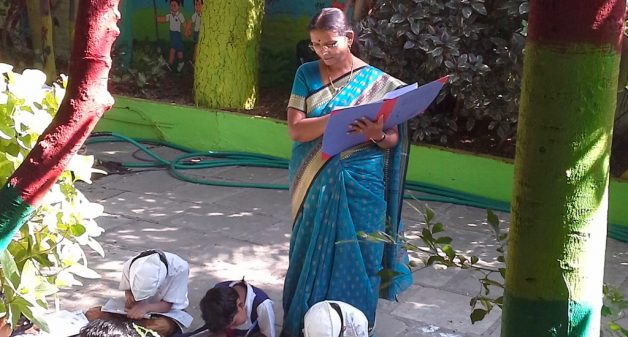 The success of the primary school is due to the dedication of Bebinanda Sakat and her husband Dattatray. (Photo by Gouri Agtey Athale)

Like all other government schools, regular classes run from 10.30 am to 5 pm, starting with assembly, prayers, singing of the national anthem, etc. There’s nothing unusual in that. But the children come to school at 7.30 am, and sweep the compound, a paved courtyard, and the classrooms. The school itself is a stone building comprising four rooms, of which one is a computer lab, a couple of toilets, one for the girls and another for the boys. They fill drinking water from the purifier, read the books that are kept there and then get down to some self- study, largely unsupervised (except by the neighbors who keep an eye on them). These are children ranging in age from four and a half to 11 years.

This experiment by the Sakat couple has been going on now since 2001 and they measure their success by the number of students who do well later in life, at the high school and further. Dattatray Sakat, the 51-year-old teacher, insists they have been able to achieve this by starting with the little ones.

“In government schools, there is no separation of children into lower and upper KG. They are all together till they go to Class I. That is not right; they should be handled differently, attended to with their separate, individual needs and abilities. We have been doing that which is why the children do well later on,” he said.

Of course, the focus is on rote learning but then these children don’t get too much support in learning at home so rote learning may be the first step. But the school has created a model in the village, which is now attracting parents from neighboring villages. Some children even come from the nearby taluka town of Shirur.

The approach road to Kardilwadi is part tar, part mud. The children who attend the primary school from outside the village come here by a taxi, which, on its return trip, takes the older children of Kardilwadi to the secondary and high schools further away. That scene, of children getting off and crowding into the taxi, is one to be seen in the vicinity of any school anywhere in the country.

No substitute for dedication

The Sakat couple was frank in their assessment of what is needed for this model to work. “Teachers need to be dedicated. We get good salaries yet some teachers don’t take their work seriously. Also, there is no point in blaming others for what is not there. For instance, we have painted our school ourselves, and right now, we are painting eight other ZP schools in the locality. But once you paint it, you need to maintain it. That is a major flaw that no one wants to address,” they told VillageSquare.in.

Their schedule of working 365 days, against the 180 days that schools are officially open, has worked its own magic. The couple reluctantly accepted that they have faced opposition from colleagues since their work shows others in a poor light.

As for the syllabus, they have gone beyond it so there are no complaints from the education department. Young Priya, all of 5 years, can read from a book meant for children of Class II.

There is no scope for expansion at their existing premises although there is demand and they routinely turn away students every year at admission time. “The strength at the school is already in excess of its authorized number. We just cannot take in more students and there is no way we can expand the school, either,” Dattatray Sakat said.

It was left for Kardile, as the village senior, to say, “This school has shown what can be done if you decide to. It has improved the village.”