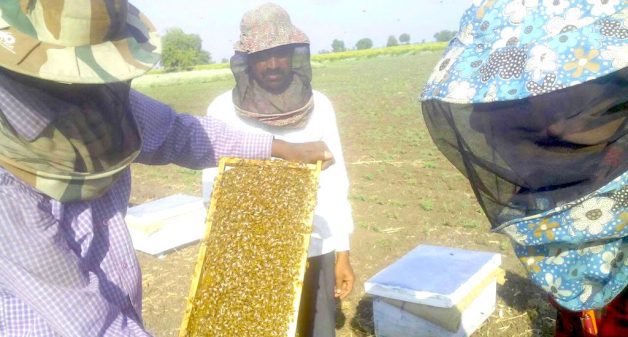 After a long hiatus of eight years, the purple-colored Karvi flower (Strobilanthes callosus) bloomed in the low hills of western Maharashtra, heightening the spirits of people like Ashok Shelar of Warsoi Koli village, neighboring Maharashtra’s favorite hill station, Mahabaleshwar. A proud owner of 80 bee colonies, he is both happy and uncertain about the natural event.

A local self- government employee and a honey collector since his childhood, he is uncertain whether he will able to fetch a premium for the amber-colored honey as the market has lately been plagued by price cutting indulged by the big brands and large-scale adulteration.

“Many branded honeys you pick up off the shelf of a mall wooed by the TV commercials are perhaps not the real honey and like most brands are adulterated either with invert sugar, liquid glucose or corn syrup,” Sudhir Sing Patil of Sat-Maha Honey told VillageSquare.in. Patil sources wild honey from the Sahyadri range including places like Trimbakeshwar, Bhimashankar, Mahabaleshwar and Koyna, and also from 40 farmer-run beekeeping groups — all processed and bottled in the unit located in the temple town of Alandi, 16 km from Pune. “To make a profit in a fight to offer low prices, the honey processing companies are resorting to contamination of honey,” he says.

Dabur has a dominant share of the Rs 6 billion branded-honey market while Patanjali by offering the cheapest honey is trying to edge out the dominant player. Although these brands have certificates from Food Safety and Standards Authority of India (FSSAI) and Bureau of Indian Standards (BIS) to their credit like others, boutique brands allege that the present-day standards are not conclusive enough to prove their genuineness.

Besieged by the big honey brands’ aggressive sale and marketing tactics that have eaten up into its sales, the Khadi and Village Industries Commission (KVIC)-supported boutique brands have declared an all-out attack on synthetic honey. Beekeepers from Punjab, Haryana, Maharashtra, Delhi, Uttar Pradesh, Jammu & Kashmir and Bihar met in New Delhi on the occasion of Honey Bee Day, celebrated every August 20, to chart a road map to expose the synthetic honey brands who have eaten into the sale of natural honey, collected by farmers and small time beekeepers spread all across the country. The daylong meet held under the aegis of Confederation of Beekeeping Industry plans to lobby with the government and the regulatory bodies to introduce new standards in the processing and sale of honey.

As many as 250,000 beekeeping families with nearly a million livelihoods and enterprises are directly or indirectly dependent on the country’s honey industry, according to industry estimates. The Food and Agriculture Organization estimates that an average of 54,000 tons of natural honey was produced every year in India between 1993-2014. A paper published by non-profit Centre for Science and Environment says that India produces 65,000 tons annually. About 38,177 tons of honey was exported during 2015-16, fetching nearly Rs 7 billion, according to India’s Agriculture and Processed Food Products Export Development Authority.

Because of adulteration, the market is flooded with far more quantity than naturally produced honey, thanks to adulteration at the processing and bottling stages. With big brands dictating the price, independent beekeepers and honey collectors are forced to sell their produce at low margins.

Ever since honey has become a commodity, it has been intentionally denatured, altered and adulterated by adding water, sugar or high fructose corn syrup or by removing pollen (to make it clearer) to cope up with its increasing demand among India’s burgeoning middle class. 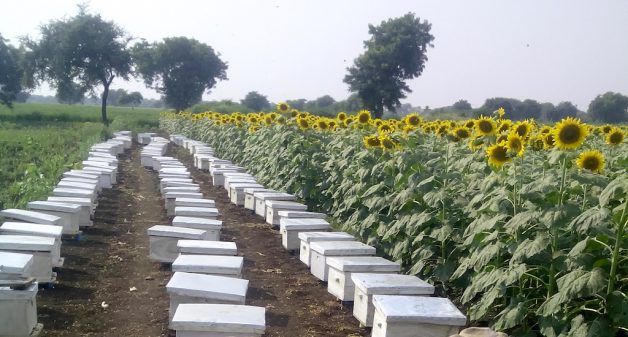 It was Baba Hukum Singh, Bharatiya Janata Party Member of Parliament from Kairana-Shamli constituency in Uttar Pradesh during question hour in Lok Sabha on July 19, who brought the attention of the House to the issue of adulteration of honey. Naming brands like Dabur and Patanjali, he claimed that both do not have the Agmark License on their labels and their products contained low or no pollen grains, resulting in their clear appearance. Pollen residue is considered beneficial to human health but its presence clouds the honey.

According to Sadhuram Sharma of Beera Khedi village in Saharanpur district in Uttar Pradesh and a proud owner of 2,000 bee colonies, there is erroneous belief among many consumers that “light and clear” honey is somehow cleaner and healthier than dark, translucent or opaque honey.

In fact, a comparative pollen grain analysis of various uni-floral honeys that was conducted according to BIS standards in 2014 gives a wide range — from jamun honey (3.9 million pollen count per gm) to 1,400 per gm in mustard honey. Incidentally, the products of the big brands failed miserably in this analysis.

According to Anil Singh Sandhu, a member of Sindhu Gram Udyog Samiti, which comprises 250-odd beekeepers spread in Hissar, Jind, Rohtak, Bhiwani, Karnal and Ambala districts of Haryana, nearly 85 percent of the honey in the domestic market is adulterated with corn syrup exported from China or locally available invert sugar. Most of the honey sold in the domestic market was not pure and contained sugar-mixed ingredients, B. L. Sarswat, executive director of the National Bee Board, has said in a statement.

“As we do not have storage facilities we prefer to sell honey to the traders who supply to the big brands after adulterating them,” says Sandhu, owner of 1,700 bee colonies. Sandhu has been migrating with his bee colonies to neighboring states to reap the benefit of the flowering seasons of different crops to acquire diverse flavors of honey.

Knowledgeable beekeepers are generally wary of accumulating stock as high temperatures and long-term storage leads to elevated concentrations of HMF (hydroxymethylfurfural). According to Codex Alimentarius Commission, which oversees international food safety standards, HMF concentration in honey usually should not exceed 80 mg per kg. In some other countries, the limit is 40 mg peer kg.

Rather than compete with big brands in the price war, Amravati-based entrepreneur Vivek Sagar Khalokar has done something unique. He has opened “24K Amravati Honey,” a honey parlor in Pune’s Pimple Saudager neighborhood, which besides offering eight varieties of honey, has products like bee pollen, royal jelly, and honey cookies on its shelves. “The price war indulged by the top brands and the shopping malls insistence of huge discounts have adversely affected our sales leading to piling up of stocks,” Kaholkar told VillageSquare.in. Kaholkar travels with his bee colonies to Kota during the mustard growing season, to Gwalior during the coriander season, to Gorakhpur when litchi trees bloom, to Etawah when fodder plant Berseem begins flowering and returning closer home to Nagpur during the flowering of Jamun.

The Confederation of Bee Keeping Industry has submitted a representation to the FSSAI authorities urging revision of quality control parameters for natural honey. The issues raised include of moisture content, standardizing the sucrose content, defining the fructose: glucose ratio, on the insistence of total pollen count; and defining plant metabolites amount.

According to Sailen Ghosh, formerly of Bhabha Atomic Research Centre’s Food Sciences Division, all others parameters can be manipulated or camouflaged with invert sugar solution. “The brands should come clean simply by issuing a disclaimer stating that the honey has been procured from natural source and processed as per the standard protocol approved by the food authority or simply state it does not include invert sugar or any other added sugar,” says the food technology scientist who holds patent for manufacture of invert sugar manufacture using the biotechnology route, which has been commercialized with several units presently running in the country.