Sales of handmade Kashmiri carpets and shawls, which are the most profitable proportion of the valley’s once-thriving handicrafts industry, have declined drastically as machine-made products flood the market 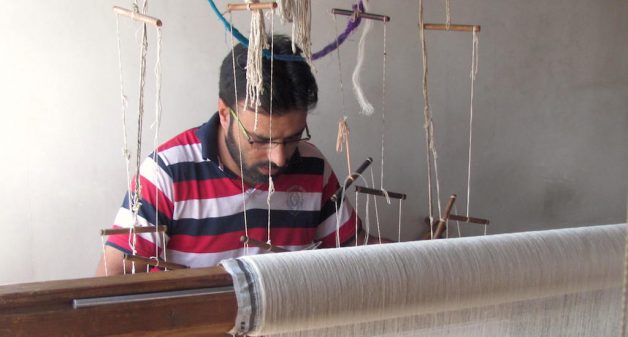 A Kashmiri artisan weaving a Pashmina shawl on his handloom. (Photo by Athar Parvaiz)

The traditional handicrafts of Kashmir that used to feed the region’s economy and provide livelihoods to thousands of people are on a constant decline with the proliferation of fake products in the market. Traditional water mills, also a source of livelihood to many villagers, thanks to the use of simple technology and water of streams for grinding corn and rice, are also fading out.

Over the past several years, the Pashmina handicrafts industry has suffered a serious setback as fake and machine-made shawls are finding their way into the market in bulk and are sold in the name of Pashmina shawls, leaving the hardworking craftsmen high and dry.

One among those affected craftsmen is Bashir Ahmad Bhat of downtown Srinagar. Family pressure is mounting on Bhat for the past few years to give up the job of carpet-weaving, which his family members now call an unproductive activity.

For generations, carpet weaving has been the traditional source of income for the Bhat family, along with thousands of other families across the beautiful Kashmir valley, often called the paradise on earth.

Bashir’s dilemma is whether he should abandon this art, which, he says, has remained “close to his heart” since childhood, or not.

“I am being forced by my family to give up this art and start some other work which will pay dividends to the family. Many of my fellow artisans have quit and they are now selling goods on road-sides,” Bashir told VillageSquare.in. “Though my heart is in this art given that I have inherited it from my ancestors, domestic pressure might force me to opt out once I finish this carpet on my loom.”

Bashir’s wife, Halima, who is suffering from thyroid deficiency and some gynecological problems, said that she and her husband shudder to think about her treatment given the present- day cost of living. “Sometimes we hardly manage two square meals,” Halima says.

The Usd 50 million handicrafts industry of Kashmir – which has employed thousands of Kashmiri artisans for decades – is facing a severe threat of extinction as sales of handmade Kashmiri carpets and shawls, which are the most profitable proportion of the industry, have drastically come down. 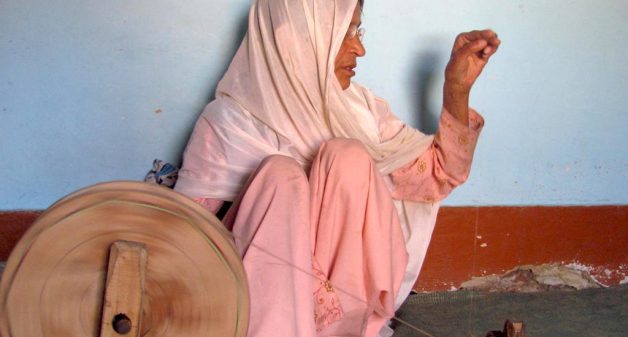 Traditionally, Kashmiri handicrafts have been exported to the places outside Kashmir – the Middle East, Europe and the US. Economic experts are voicing concern that the artisans of Kashmir may resort to extreme measures if the handicrafts industry of Kashmir is not salvaged.

“Handicrafts industry is not only a good contributor to the Kashmir’s economy but is also closely linked with the culture of Kashmir.  Therefore, it is mandatory to protect this industry,” economist Nissar Ali told VillageSquare.in.

Ali expressed concern that successive governments have not done anything substantial to help the artisans. “A blow to the carpet industry means a blow to the thousands of skilled labourers as well. The government should wake up to this reality as soon as possible,” Ali said.

With fake machine-made Pashmina shawls rampant in the market, women are losing livelihoods given that these items don’t need handspun Pashmina. Hand-spinning of Pashmina was being done by thousands of women for a living.

Most of the estimated 10,000 Kashmiri women, who were living off on assignments of spinning Pashmina wool before it would go to the looms for weaving shawls and stoles, had to quit the art as the assignments from the Pashmina traders, most of whom are now dealing in machine-made products, have diminished.

“I used to earn more than Rs 4,000 per month at an average when I used to get Pashmina-spinning assignments. But for the past more than five years, I have hardly got any assignments,” said Saja Begam of Pampore in Pulwama. “I used to help the family of my son who has three kids one of whom is studying in 10th standard. It was all because of the money which I used to earn by spinning the pashmina.”

But, Begam said, it has become difficult for her to take care of her own financial needs such as buying clothes and medicine for herself.

Several women said that they were not dependent on their husbands for their personal financial needs and were saving a little amount for supporting the income of their families as well. They hope that Kashmir’s hand-made Pashmina products find the market again.

“But that can only happen if the fake products are banned in the market,” said Shamima Akhtar, a housewife in Begam’s neighbourhood. 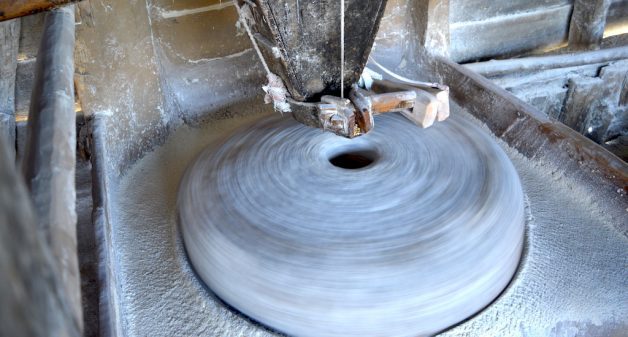 The traditional floor mill in Kashmir, which runs on hydropower. (Photo by Athar Parvaiz)

Traditional water mills of Kashmir, which used to be an important feature of village life and where almost every Kashmiri household in villages used to grind rice and maize (for making bread) using simple technology with the help of water, are on constant decline. One major reason for this is said to be the lack of water availability in summers because of frequent droughts and division of canals among farmers.

“I run a water mill. But most often I don’t get enough water to run it. I used to earn around 90,000 rupees every year after deducting all the expenses. This used to be my profit money. But, now I hardly manage even half of that,” said Abdul Aziz Lone of Tankipora in Kupwara.

Maintenance of water mills, Lone said, has also become a problem as the technicians who used to fix the snags are now hard to find.

Ghulam Ahmad Mir, a technician in Budgam, said that he gets calls from far off areas when some water mill owner faces some issue. “Running a water mill makes a lot of economic sense as you just have to invest in the beginning. Later, it runs without any cost. In comparison, a mill which runs on electricity takes double the investment in the beginning and needs electricity for operations which comes at a cost,” Mir told VillageSquare.in.

“But since the water resources have dried up, people find it difficult to run a water mill. That is why we see these mills only in very few villages,” he observed.