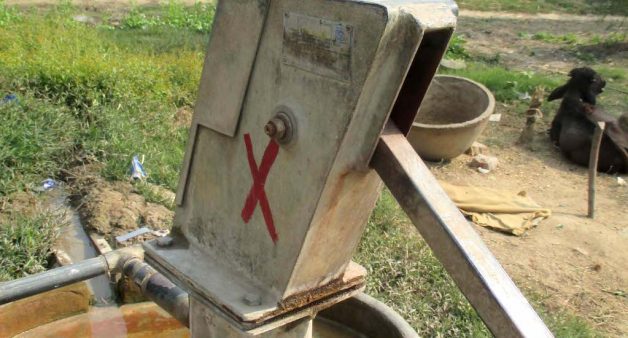 Hand pumps that are known for their arsenic-laced water are still in use in Ekawana Rajpur village in Ballia district. (Photo by Tarun Kanti Bose)

Ekawana Rajpur is a village in Belhari administrative block along the banks of the Ganga and 16km from Ballia town in eastern Uttar Pradesh where villagers commonly suffer from afflictions such as itchy skin lesions, changes in skin colour, and hardening and thickening of skins into nodules. These afflictions are due to arsenic contamination of their drinking water sources.

A few decades ago, Ekawana Rajpur was on the southern bank of the Ganga. The river then changed its course and devoured agricultural lands and homesteads. The displaced villagers settled on the northern bank. Situated 3km away from the National Highway, a majority of the villagers are small and marginal farmers. The village has been worst affected of arsenic toxicity (arsenicosis), though numerous cases of deaths due to the ailment have been reported from nearby Sughar Chapra, Tiwaritola, Gangapur and Choube Chapra villages, as villagers depend on hand pumps for drinking water.

Basanti Singh, a 71-year-old resident of Ekawana Rajpur, had a cancerous wound on her right ear and she was operated at New Delhi’s Batra Hospital. She has black and white lesions on right and left foot. She suffers from breathlessness. “In 2008 my husband Dinanath died of cancer. He had a cancerous wound on his left foot from which blood and pus continuously oozed. He had black and white spots (lesions) all over his body,” she told VillageSquare.in. “He suffered from skin cancer. Two fingers of his left hand developed ulcers and was amputated.”

Before her husband’s death, Basanti lost her two daughters — Amita, 35 and Anju, 25 — due to arsenic poisoning. Her two sons Ashok and Arvind also have skin lesions. Her daughter-in-law Babita Singh comes out and says, “My husband lives in Ballia town and I am compelled to live in the village as I am working as an Anganwadi (day care) worker. Our hand pump has arsenic but we use the water for washing utensils and clothes. The river has been changing its course and we have stopped counting the number of people who died due to arsenic poisoning in our family and village.”

Standing nearby, the 56-year-old shows black and white spots (lesions) all over her body and says, “I am suffering from asthma since 2013 and its gets aggravated during the winter. This has happened all due to the hand pump water which we have been consuming.” 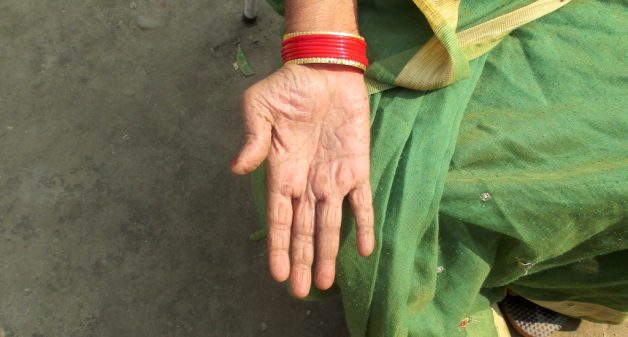 A resident of Ekawana Rajpur village has lesions on her hand due to arsenic poisoning. (Photo by Tarun Kanti Bose)

Ram Singh, 57, who came to the village 2-3 years ago after working in a construction company in Surat in Gujarat, said, “These hand pumps have been installed in the 1990s. Still we suffer from white and black spots (lesions) all over the body. It is precisely these hand pumps — bored to a depth between 27-36 meters below ground level — that have introduced arsenic into our lives.” His wife Krishna Singh has spots all over her body.

Ekawana Rajpur has dusty mud roads, a few of the houses have electricity and there’s no healthcare center in the village. The evidence of arsenic is widespread in the village. Villagers above 35 years of age have skin lesions, known as melanosis, which is the first stage of arsenicosis. In some, the skin of their palms and feet had become rough, dry and thickened (keratosis, the second stage) and a few suffered from breathlessness, which is the third stage of the disease. There are internal complication in addition to the outward signs.

“It started in 1990s when the government installed a large number of hand pumps throughout Bihar and Uttar Pradesh to provide clean, easy-to access water to the villagers. The villagers had to pay large price for this convenience. Villagers started rejuvenating disused wells for getting rid from arsenic contamination. But again, villagers backed out and it started drying up. Again it’s in filthy state,” Ashok Singh, who lost his father and sisters due to arsenic poisoning and lives in Ballia town, told VillageSquare.in over phone. “In some of the villages, RO (reverse osmosis) units were installed on the dysfunctional hand pumps. Water tanks were constructed for getting rid of arsenic contamination. But still the problem exists.”

Referring to a report, Ashok Singh said, “A study conducted by the Centre for Science and Environment (CSE) in 2004 took the samples of hand pump water, hair and nail of the people living in Ekawana Rajpur and nearby villages. They were analyzed and found to contain levels of arsenic much higher than what was considered safe. Binod Khaitan, a professor in the Department of Dermatology and Venereology at the All India Institute of Medical Sciences (AIIMS) pointed out that arsenic was not only carcinogen but also hampered the healing of injuries.”

While 80 to 250 per parts billion (ppb) concentration of arsenic has been found to be the tolerable limit by toxicologists, the CSE study has found up to 4,800 to 6,300 ppb of arsenic in the hair samples. The Bureau of Indian Standards guideline for arsenic in drinking water is 10 ppb. The analysis of hand pump water of Ekawana Rajpur and nearby villages showed the levels at over 73 ppb.

The permissible limit of arsenic in drinking water — as given in the World Health Organisation (WHO) guidelines and followed by the Bureau of Indian Standard — is 0.01 milligrams per liter (10 ppb). Water samples tested in the arsenic-affected villages of Ballia district and surrounding areas had arsenic levels ranging from 47 to 129 ppb — about five to 13 times the permissible limit> Even the hair samples of the residents were found to contain arsenic in very high concentrations — 2,480 to 6,310 ppb, as against 80-250 ppb in normal healthy hair, states the CSE study.

According to WHO, intake of one milligram of inorganic arsenic per day may give rise to skin lesions within a few years. The early symptoms of arsenicosis are manifested in the form of dark patches (melanosis) along with white patches (leukomelanosis) on the skin and extremities, corn-like lesions on palms and soles (keratosis), increasing weakness and numbness of limbs (neurological manifestation) and breathing problems (respiratory manifestation).

Prolonged exposure to arsenic may result in malignancy of skin, liver, kidney, lungs and bladder. According to WHO, cancer risk (lifetime risk of dying from cancer) from exposure to more than 0.05 milligram arsenic per liter per day is 13 per 1,000 persons.

There have been many efforts to combat arsenic poisoning. The most notable among them has been led by Dipankar Chakraborti, Research Director, Arsenic Research Unit (ARU) and former Director, School of Environmental Studies (SOES), Jadavpur University, Kolkata. Chakraborti started with a focus on West Bengal way back in 1988 when he first sounded the alarm. Since then he and his associates have worked closely with the villagers of Ballia district, districts of West Bengal, Assam, Bihar, Chhattisgarh and other states of India, Bangladesh, and elsewhere in Asia, giving clinical support to the villagers affected by arsenicosis. His groundbreaking reports has brought the issue of arsenic poisoning to the fore.

There is no medicine for chronic arsenic toxicity. Safe water, nutritious food, fruits and vegetables and physical exercise are the only preventive measures to fight arsenicosis. However, experts suggest natural remedies to counter the ravages of chronic arsenic poisoning, such as black tea, as tea contains polyphenol that scavenge the free radicals. Even homeopathic medicine, such as Arsenicium Album, has been advised by the experts has been quite effective in fighting out arsenic poisoning.

Chakraborti and his associates in ARU suggest that epidemiological research need to be conducted in the arsenic-affected areas to characterize and quantify the arsenic-related public health burden and to document the long-term health benefits of arsenic exposure reduction. People should be made aware that their arsenic-related diseases are due to contaminated groundwater they are using for drinking and cooking.

Tarun Kanti Bose is a journalist based in New Delhi.