The young people of Shikdamakha in Assam didn’t wait for the Swachh Bharat Abhiyan to set standards in sanitation, which has today resulted in the village being one of the cleanest in the entire country 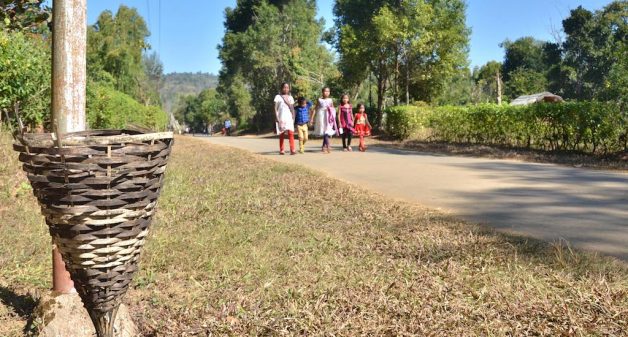 The paths of Shikdamakha village are dotted with bamboo baskets to collect waste. (Photo by Abdul Gani)

Most people in the sleepy village of Shikdamakha, some 100 km from state capital Guwahati, haven’t heard of the Swachh Bharat Abhiyan, the central government’s flagship water and sanitation program. But it doesn’t matter for the 89 households in the hamlet nestled in the hills of Karbi Anglong because the young in the community have already taken strong action to keep the village clean.

This was made evident when the Union Ministry of Drinking Water and Sanitation published a Village Cleanliness Index. Shikdamakha earned the maximum points in the cleanliness sub-index of the national gauge. The cleanliness drive was started in the predominantly Tiwa village four years before the launching of Swachh Bharat Abhiyan by Prime Minister Narendra Modi in 2015. It was the youth of the village who motivated the rest and conducted cleanliness competitions among the households on Christmas, which helped them to get their entire area clean.

“It was in 2010 when we first started the cleanliness drives. There was a weekly market in the nearby area and mounds of organic and inorganic waste left behind after every market day before Christmas celebrations annoyed the villagers,” Elvin Phangcho, a schoolteacher and member of Saint Anthony Youth Association (SAYA), told VillageSquare.in. “To get rid of this, sub-committees were formed to maintain cleanliness.”

The villagers make bamboo baskets and place these in front of their houses and on the roadside. They also make it a habit of sweeping the roads thrice a week. Both men and women take part in the community cleaning drive.

“Now, people from every family come out and join in the community cleanliness drives like sweeping roads. As we do it regularly, we hardly find any dirt on the roads,” said Holvis Maslai, a village elder.

The village was established in 1953. “Our ancestors say that it was a place full of fear. Shikdamakha means trap of hillocks. There were beliefs that ghosts used to catch humans here by laying traps on the hillocks,” Maslai said. 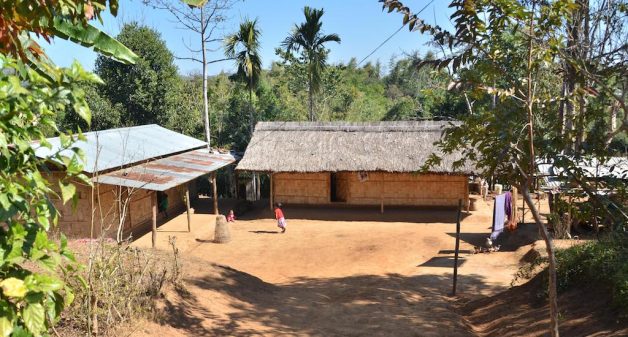 The courtyards of homes in Shikdamakha are enviably clean. (Photo by Abdul Gani)

The local residents now want to make their village best in the entire region. Mawlynnong, a small village in Meghalaya, has been named as the cleanest village in Asia by Discover India magazine in 2003. “We went to Mawlynnong village to see how they maintain the cleanliness. It was a wonderful experience for us. We can become better than them,” Maslai asserted.

Local lawmaker Mansing Rongpi, who went to Shikdamakha village to encourage the villagers, said the government would help in developing the village as a tourist destination.

“Cleanliness is a continuous process and it has to continue. Mawlynnong in Meghalaya has earned the status of the cleanest village in Asia. However, we can do this here too. Today is just the first step. I hope the people of Shikdamakha will continue this journey of cleanliness and I hope from now on the Mawlynnong’s status of the cleanest village does not go unchallenged,” Rongpi said.

“We also have plans to go for infrastructure upgradation in the village so that tourists can come and stay there. This village is more accessible from Guwahati than Mawlynnong from Guwahati. So once we upgrade the infrastructure, I am sure we would see lots of tourists here and the locals can earn revenue from that,” he added.

Estarwel Mithi, whose family has won the first prize in cleanliness, said the villagers may be poor financially but they are always concerned with cleanliness. “It was great for me to win the award but what I have seen is that everybody else in the village tries to keep their homes and neighborhood clean,” Mithi, a father of eight, told VillageSquare.in.

The village has also earned the coveted Open Defecation Free (ODF) status recently. District Nodal officer (DNO) Morning K. Phangcho said that it was the effort of the villagers that was responsible for the accolade. “The credit goes to the villagers for being so conscious about the cleanliness in spite of being so backward,” said Phangcho. “They haven’t heard of Swachh Bharat Abhiyan, they don’t have television and there is no mobile network available in the village.”

The villagers also advocate a plastic-free way of life. The local vegetable sellers and other traders do not use plastic bags. Phangcho said that if some outsiders use plastic bags, the villagers would ask that person to immediately dump it in a particular place.

Phangcho, who is an engineer with the public health engineering department, said that for making the village ODF, the department has helped the villagers in getting proper sanitation systems.

Kubin Madar, the village headman, said that from now on the village will continue to be a better place and would set an example for state and the entire region. “We are proud to be a part of the process,” said Madar.