Victims of ill-planned infrastructure development, villagers in this Paschim Champaran village are now forced to migrate because prime agricultural land has turned infertile. Flooding in parts of the village has increased as well, they say 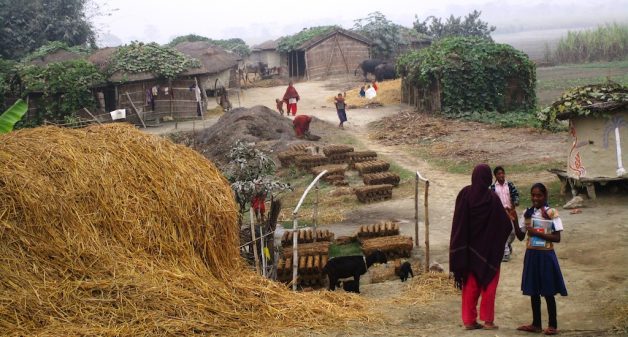 Residents of Bariyarpur village have borrowed money and settled on the southern side of the elevated road to escape the regular flooding. (Photo by Nidhi Jamwal)

There was a time when Mohan Yadav’s family was self-sufficient. Living on the banks of the Gandak river in Bariyarpur village of Nautan administrative block in Paschim Champaran, Mohan did not have to buy anything from the market. On his five bigha (two acres) fertile land, he used to grow a little of everything — rice, wheat, sugarcane, pulses, vegetables, etc. “Everything for personal consumption was sourced from the farmland. The sugarcane crop alone fetched Rs 1 lakh in a year,” reminisced Mohan, father of four young children, who now works as a daily wager in Chandigarh.

The fortune of Mohan’s family started to change in 2009 when the foundation stone for 1.92 km bridge on Gandak river was laid by Bihar Chief Minister Nitish Kumar, who promised the bridge would drastically cut down travel time between Pashchim Champaran and Gopalganj districts, and bring prosperity to the underdeveloped northern areas of the state.

However, the infrastructure project, which includes a bridge and its elevated approach roads — 3 km towards Gopalganj and 12 km towards Bettiah (district headquarter of Pashchim Champaran) — built at a cost of Rs 54.8 million and inaugurated last March, has turned the fertile agricultural land of Bariyarpur village into barren wasteland covered with a thick layer of sand.

“The elevated approach road cuts across the flow of Gandak, obstructing its natural path. In the last five years, the river has deposited huge quantities of sand on 150-200 acre of fertile farmland in our village. Agriculture is dead,” laments Mohan, whose three younger brothers also migrate with him to Chandigarh.

“The distance between east and west embankments is about 12-15 km and this entire area belongs to the river, as during the monsoon the river swells and its water spreads far and wide,” Adya Prasad Yadav, another resident of Bariyarpur, told VillageSquare.in. 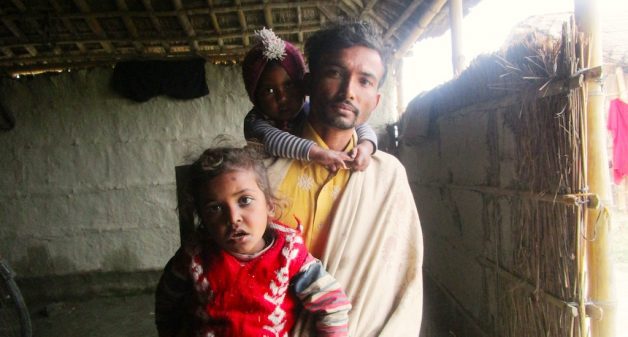 Mohan Yadav used to grow wheat, rice, and sugarcane on his land in Bariyarpur. After the elevated road and bridge was built, his land has turned waste. Mohan and his three younger brothers migrate to Chandigarh to work as daily wagers. Mohan’s wife looks after his four young children. (Photo by Nidhi Jamwal)

While the embankments restrict the horizontal flow of the Gandak, its vertical flow, too, got obstructed with the construction of elevated approach roads on the riverbed. “After construction of the road bridge, the river is left with only 1.9 km area under the bridge to flow. The elevated road blocks rest of the river’s path,” says Adya Prasad. According to him, during the construction stage, Gandak exerted so much pressure on the elevated road that in 2013-14, another small bridge was carved out to avoid a breach in the road.

“Earlier, in the monsoon season, we used to face floods for 15 days to a month when the water level rose till our knees, which was good for the paddy crop. But now, houses in the north are flooded right from July to October, with water up till the chest level,” says Mohan, who used to live in the northern part of the village, but shifted south due to regular flooding.

“I borrowed some money from family friends and took a loan of Rs 1.5 lakh from a moneylender at seven percent interest rate to buy land across the elevated road. I have already lost my land. I cannot afford to lose my children to the floods,” says Mohan, whose family now lives on 1.5 katha land on the other side of the elevated road.

Like Mohan, Ramakant Yadav has also relocated to the safer side of the elevated road. “From Rs 2,500 a katha, the land rate has touched Rs 1.5 lakh per katha in the south of the elevated road,” he says. Mohan feels lucky to have purchased land when it was still Rs 90,000 per katha.

No luck has, however, come Adya Prasad’s way, who continues to live in the danger zone of the village. “I already have Rs 4 lakh loan on me, which I took for the education (engineering) of my elder son. My two younger sons are studying at a college in Bettiah, whereas the youngest son is still in school. From where do I get money to relocate?” he questions.

Along with Adya Prasad, seven more families continue to live in the north part of Bariyarpur facing frequent flooding. More than 60 families have already begged, borrowed and relocated. Villagers like Ramesh Yadav are yet to receive Rs 2 lakh compensation towards their house that was flattened to make way for the elevated road. 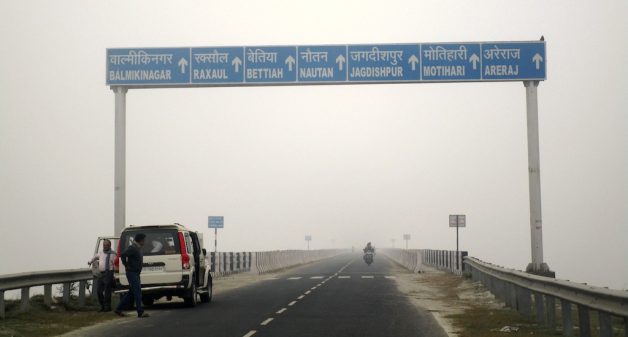 The Gopalganj-Bettiah bridge. The elevated approach roads to the bridge are built on the Gandak riverbed, cutting across the river’s flow. (Photo by Nidhi Jamwal)

Loss of house and relocation pangs aside, the villagers of Bariyarpur have also lost their livelihood as the farmlands are covered with sand. “I haven’t got any crop from my 16 bigha land since 2011, though I continue to pay the agriculture land tax,” says Ramakant.

Adya Prasad’s 5 bighas, on which he used to grow sugarcane, is also full of sand. “People have relocated across the elevated road, but everyone’s farmland is on this side of the village, covered with sand. There are no farmers in Bariyarpur anymore,” he says.

The loss of livelihood has induced migration in both kharif (summer) and rabi (winter) seasons. Young men from almost all the households of Bariyarpur migrate to Punjab, Haryana, Delhi or Chandigarh to work as daily wagers. “As against Rs 100 a day, I earn Rs 300 per day in Chandigarh,” says Mohan, who has to repay a loan of Rs 1.5 lakh.

According to Eklavya Prasad, managing trustee of Megh Pyne Abhiyan, a non-profit that works on water and sanitation issues in north Bihar, “The Gopalganj-Bettiah road bridge is a perfect example of how not to transform landscape, retard local economy, impact lives, and force change amidst the local habitations, under the garb of infrastructure development and enhanced conveniences.”

Lokesh Kumar, the district magistrate of Pashchim Champaran, acknowledges the problem of sand deposition and flooding in the northern part of Bariyarpur. “Villagers have never directly complained to me, but it is natural for the river to bring sand and deposit it,” says Kumar. Bariyarpur may be facing a problem but a lot of other downstream villages are happy as the elevated road acts as an embankment and later can take both kharif and rabi crops, he adds.

Prasad disagrees. “The short-sightedness of the project-connectivity has installed a false sense of security amidst the village downstream of the road link, which can lead to disastrous consequences,” he told VillageSquare.in.

Kumar accepts that the elevated road blocks the flow of Gandak, which, if breached, can lead to mayhem in the downstream areas. “Apart from the main bridge, we have constructed another small bridge to help Gandak flow. Proposal of a third small bridge has been passed, but strongly opposed by the downstream villages. If appropriate measures are not taken, the Gandak might wash away the road if it receives excess water,” says Kumar.