Finance Minster Arun Jaitley has paved way for making significant transformation of rural areas a reachable dream. It is now up to the states to get their acts together and not fritter away the substantial allocations for agriculture and rural development 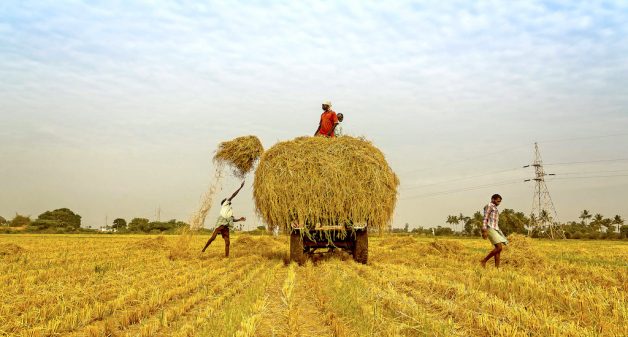 The 2017-18 budget has made notable allocations for agriculture and allied activities. (Photo by Kannan Muthuraman)

Finance Minister Arun Jaitley has presented a seemingly favourable and mature budget for rural India. This is a surprise since the indications from the public stance was that government policies are all for making the country investment friendly, technology absorption, enterprises, digital world and industrial development — all of which often can mean fatigue for the never ending problems for rural India. It appears to be devoid of all cheap populist gimmicks, which we used to see earlier. Much is understated in this budget.

A number of things about rural India have been dealt with in this budget. The most noteworthy things are an all time high provision for the rural jobs guarantee program, a target for building 10 million rural houses, significant increase in creation of rural roads network, creation of a micro-irrigation fund, scaling up of the soil health card schemes through hundreds of Krishi Vigyan Kendras (KVKs) and also some private entrepreneurs, suggesting a scheme for creating poverty free Gram Panchayats (village councils), and starting of Mahila Shakti Kendras (women empowerment centers) at rural day care centers.

Twist to the tale

There is a twist to many of these. First, the government has provided for Rs 480 billion for Mahatma Gandhi National Rural Employment Guarantee Act (MNREGA). This appears surprising at first because Prime Minister Narendra Modi ridiculed the scheme a couple of years ago. Why is it being emphasized now, when he is so far away from elections? Not for popular votes.

I guess this is because there is a growing realization that microstructures for water harvesting do contribute massively to agricultural growth. He is building on the experience first of Gujarat and later reinforced so spectacularly by Madhya Pradesh, both of which have shown huge surge in agricultural incomes in the past decade or so.

To underscore this emphasis on creation of micro-infrastructure for water harvesting, we have this mandatory requirement of geo-tagging of all assets created under MNREGA. Targets for farm ponds are being doubled, along with other some land improvement methods, under the MNREGA.

Thus the principle that public expenditure must be primarily used for creation of verifiable assets, whether public or private, is being emphasized. There are good chances that this provision would not be used by the states if their lower order bureaucracy or small time politicians continue to treat MNREGA as a source of easy money and the states lack the will to control them.

There is a specific mention of emphasis on use of the increased Irrigation Fund and the newly set up Micro-irrigation Fund for East and North Eastern states. This is but a small beginning. Nevertheless, it’s a concrete step rather than empty talk of ushering in a second green revolution in Easter India. Many eastern states suffer from floods ruining their kharif (monsoon crop) prospects and have no water to grow crops in the dry season because irrigation infrastructure has not been put in place.

We hope that the funds would allow much wider application of small capacity solar powered or other water lifting devices from easily accessible groundwater aquifers in these states. In fact, I would suggest that almost the entire Rs 400 billion allotted for this purpose can be profitably and productively used in the East and the North East. This can happen only if money is released from the greedy and greasy clutches of the hopelessly dysfunctional state irrigation bureaucracies and is deployed for the basic purpose of supplying water to crops through all possible means.

I am impressed by the sensitivity shown by the budget to the hitherto largely neglected regions suffering from arsenic or fluoride contamination in ground water. The drinking water-related budget provision specifically identifies this need and provides for it. State governments have been hitherto either oblivious to this need or simply denied the existence of the problem. The most that was done by several states was simply marking in red the hand pumps, which poured water that was affected by these. Now that the Centre has shown leadership, we hope that the states will perform what is expected of them. See: Arsenic contamination in groundwater killing villagers in Ballia

The 14th Finance Commission gave significant resources to Gram Panchayats and these are being largely frittered away for the want of good human resources. Creation of such cadres that can serve the Gram Panchayats is largely in the state hands. And the Finance Minister has suggested the provision of funds for that purpose. I also find it remarkable that it is the Central Government that is now suggesting micro planning for creating sustainable rural livelihoods. Again some thing that should have been forced by the states on him but it is again the other way round.

Money provided for most of these rural schemes are significantly higher allocations compared with the past. The actual use of these funds, however, depends on effective scheme designs and faithful implementation by states. Much of the provisions for the rural and agricultural applications are in the administrative jurisdiction of states. Jaitley can only create possibilities of making money available for the right purpose.

It will be truly unfortunate if the states rejoice at abolishing the difference between Plan and Non-Plan categories (the later often used in state schemes for payment of salaries of bloated bureaucracy) and blithely hire men and women to please the constituency of their inept politicians or blow up the sums on buying fancy cars and gadgets that often are not even unwrapped from their packets.

The Finance Minster has paved way for making significant transformation of rural areas a reachable dream. He is trying to take these largely irresponsible and often insensitive state horses to water. The Rs 21 trillion question is whether these horses will actually drink.