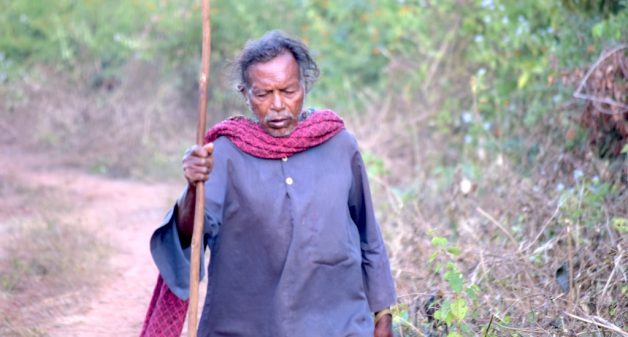 Jhita Kutruka is the lone survivor of Ankurbali village in Niyamgiri hills. (Photo by Basudev Mahapatra)

After walking nearly 7 km from the road head, you would reach a place on the banks of Panimunda stream in Muniguda administrative block of Odisha’s Rayagada district, where Ankurbali village once used to exist. On the slopes of lower Niyamgiri hills, the place is now a part of the forest with no remnants visible today. Till a decade ago, people of the Dongria Kondh tribe inhabited the village.

Although revenue records and voter lists still mention Ankurbali, the village no longer exists. At least four other neighbouring villages of Umbesi, Uchukumba, Haimandi and Dahli under the Shibapadar gram panchayat (village council) of Muniguda block do not exist physically.

Of the 10 villages on the Niyamgiri hill slope under Shibapadar panchayat in official records, only five exist today. The rest have vanished during last 2-3 decades, Chandra Sekhar Behera, former sarpanch (village council chief) of Shibapadar, told VillageSquare.in. Of the existing villages, Jarapa is now on the verge of extinction, he added.

“Every tehsil (smallest revenue division) might have 3-4 such unmanned villages categorised as bechhapari or deserted,” Gunupur Sub-collector Basant Kumar Sahoo told VillageSquare.in. He has asked a person at the Munigua Tehsil office to go to the locations and make a quick physical verification.

However, the outcome of physical verification couldn’t be obtained even after repeated attempts. “Government employees are afraid of going into the hilly forests, fearing attack by left-wing extremists,” said a government official of Muniguda block who declined to be named. “How can they give you any concrete information?”

“Jakasika Kuli died. Two others died too. I lost my brother and his family to unknown diseases. The whole village was terrified. I shifted to Serkapadi village down the hill-slopes. As my wife died there, I moved to Kesharpadi,” said 65-year-old Jhita Kutruka, the lone survivor from Ankurbali village traced by VillageSquare.in so far. “I don’t know what happened to other survivors. But, each time a disease came, at least three-four people from our village used to die,” Jhita said at his present village, Kesharpadi.

“Most people died of diseases,” said Kumarsami Hial, a local youth. “They live in the forest, consume water from open streams. Diarrhoea is very common to these villages in the hill range. We believe most of these people might have died of this and of malaria as well,” said Mukesh Hial of Panimunda village, named after the stream that flows beside it. 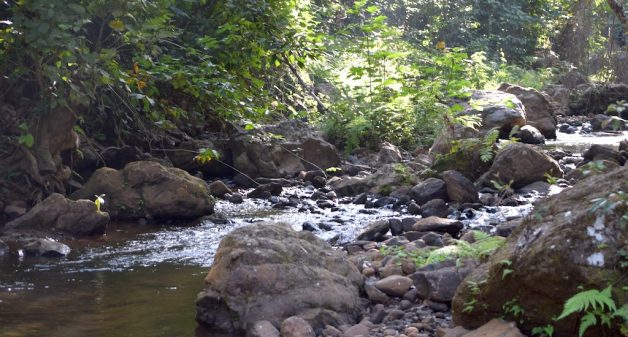 The place where Ankurbali village existed has been reclaimed by the forest. (Photo by Basudev Mahapatra)

“If two or three people die in a village, others prefer to desert the village believing their village is in the eyes of the death god,” said health worker Bisaya Rout, citing the example of another hilltop village named Kandha Boriguda that turned unmanned following the death of three people at a time. The village was only 7 km from the Muniguda block headquarters. Although she visited the village once and met the villagers, she, however, had no knowledge of the whereabouts of the survivors.

Citing that blind belief is the major issue with these tribal people, Bisaya Rout said, “These people never take the patient to the hospital in the occurrence of any such disease. They rather resort to witchcraft treatments.”

The reality is that there is no road communication to these villages. From different villages in on the hill slope, one has to walk between 7 km and 20 km down the hill to reach Panimunda, which is connected by a motorable road. From Panimunda, the nearest hospital in Muniguda block headquarters is about 15 km. Getting a vehicle at Panimunda to carry a patient to the hospital is just impossible, said Raski Kulshia of Hatipadar, a village in the foothills.

“Even if we get one, we don’t have money to pay for it,” said a tribal from Khambesi village who was terrified when we asked his name.

So, they have no other option but to go to witchcraft practitioners or so-called spiritual healers. In the course, only a few lucky fellows overcome diseases while most use to die, according to Behera, the former sarpanch.

No governance the real reason?

To many of the tribal community and local people, indifference and unwillingness of the local administration to reach out to the villages in the forest have been the primary reasons behind vanishing of these five villages.

Despite the fact that the state government has a special agency to look after the welfare of Dongria Kondh tribal communities and development of the region inhabited by them, tribal villages scattered across Niyamgiri hills still live in near isolation. “Governance system is yet to reach these villages. Forget about modern facilities, these members of a particularly vulnerable tribal group (PVTG) are deprived of basic things like road, water and health. Nobody bothers about them,” said Gournga Rout, a Muniguda-based development activist and researcher.

“Even though programmes are announced by the government for development of tribal communities, who is verifying and monitoring the works in these remote villages on the hill slope? No government official is willing to go there because of no road, no basic facilities,” Rayagada-based journalist Simanchal Padhi said.

“I had never seen any government official visiting our village, when we were living in Ankurbali,” Jhita said. “Political leaders hardly visit these villages. Nobody has any interest to know how and in what condition do these people live.”

On the other hand, these people are asked to walk down to reach the Panimunda village for every purpose – from attending political meetings as expression of their support to local leadership to participate in government programmes like census, election-related programmes, voting, etc.

“Even for small requirements like a packet of biscuit or snacks, we have to walk down 15 km on the hilly tract,” said Bandleka Drinju of Jarapa village, which is on the verge of extinction. “We don’t have more money to buy many things from the market,” he added, to explain their state of poverty.

They are very much citizens of India but cared by none. Neither the government nor its administration takes responsibility of these people, leaving them to live in isolation embracing their own fate. “If such apathetic state continues, the existing villages would also vanish without being noticed by anyone,” said Dundu Kutruka, a tribal youth of Kesharpadi village.