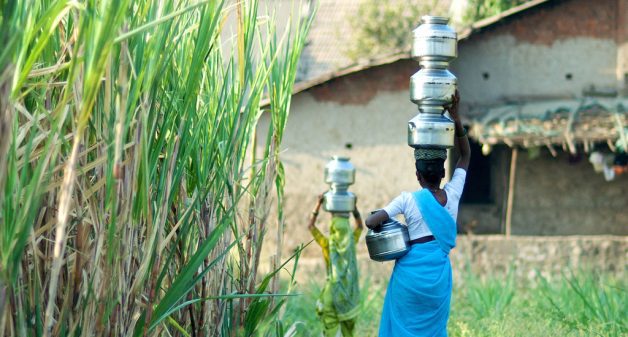 Most rural women still bathe in the open but fetch water to their homes so that their daughters can bathe comfortably. (Photo by Daniel Bachhuber)

When people are poor and unable to meet even basic daily necessities, maintaining hygiene becomes a secondary issue. Bathing regularly is more like performing a ritual, neglecting its basic function of maintaining cleanliness.

This situation prevails in most parts of rural India. The issue of survival and basic sustenance holds much deeper value than building bathrooms. The logic is simple: why should I waste my limited resources on building a bathroom when I don’t even have money to make my daily ends meet?

It is a sad truth that the issue of bathing has never been considered a problem grave enough to be discussed, even by women. It is strange that although women understand that secure bathing spaces are important not just for maintaining privacy but for the greater goal of cleanliness, they have never talked about it much. They have either accepted it as a tradition that has been carried out through generations or accepted the fact that there are more important things in life other than stressing upon bathing.

This brings us to an important question: What are the opportunity costs of not maintaining personal hygiene? Putting it in simpler terms it means the costs that women have to bear in terms of mental, physical pain and monetary loss when they are exposed to unhygienic conditions.

In a typical rural setup, where there are limited financial resources and a lot of mouths to feed, prioritizing of needs comes into play. Women are more likely to face health insecurities than men, so it is far more important for women to seek medical care. But in such situations where they face the risk of infections, they forgo the decision to visit a doctor, as doing so would mean additional resource strain for her family. So for her, the opportunity cost of choosing medical care would mean losing out on her family’s needs. For them feeding their family, educating their children and making their home a better place to live is more important to them than their health. It is because of this that in many parts of the country, women still go and bathe outside but fetch water to their homes so that their daughters can live comfortably.

Evidence from a pilot study

Against this background, a pilot research study was conducted in Chamrabaad village of Bokaro district of Jharkhand, where a small sample of 29 women was interviewed about bathing practices and the consequences it has on them. The sample was chosen randomly on a voluntary basis. Data thus collected has been classified, analyzed, interpreted and conclusions are drawn. The major conclusions emerging from the study are as follows.

Of the total sample, approximately 44.8% have never gone to school, 31% have studied up to Class 10th and only one out of the sample is pursuing her studies after Intermediate. More than 95% of the women who were interviewed took bath on a daily basis and used soap or other cleaning agents, whereas 100% reported that they took bath regularly during their menstrual cycle.

Out of 29 women who were interviewed on a one-on-one basis, only three bathed in closed spaces that were makeshift arrangements with thatched roofs and walls. Most others took bath in ponds that were less than 1 km away from their houses. It was observed that even in better off households, women visited the ponds for bathing purpose as there was no water available in the spaces created in their homes.

It was also observed that majority (73%) of the women use cloth that can be recycled for protection during menstrual cycles. Most of the women, around 72%, clean the cloth where they take bath. It was unfortunate to acquire the information that they wash their used cloth during the menstrual cycle in the same source where they were taking bath.

Only 3.4% women reported to disposing the napkin safely with other wastes, while 17% said that they dumped the napkin in the same pond where they took bath. “We place the soiled napkin in between the fingers of our legs, and while we dip inside the water to take bath, we release it then and it sinks down to the ground,” a 13-year-old girl said. “If you search the bottom of the lake, you will find the whole bed covered with napkins,” said the mother of a 15-year-old who uses sanitary napkins.

Talking with a middle-aged woman in a village in Jharkhand, she confessed that she still goes to a nearby pond to bathe, but ensures that her daughter has a secure and private space for bathing. She accepts that her health can’t get any better as she is old now, but her daughter who is young needs to maintain hygiene as that is of utmost importance. The respondent says that when she was young, there were lots of financial restraints. But now things have changed for better and now they can even think of building a closed space near her home only for her daughter.

The second point, which should be made clear, is that having a disease or an infection not only affects a woman physically but also financially. The concept of opportunity costs comes into play again when we see it in terms of daily wages. Women in rural India are mostly engaged in fieldwork. They either work on their own lands or as farm laborers. In both situations, missing a day’s work can mean missing on their wage, which can be either in the form of cash or kind. Mostly it is seen that women are paid for their labor in kind, which implies that being absent from their work would make them miss on their daily food. As women have time and money as scarce resources, they choose to work and earn their living rather than wasting it all on seeking treatment. They might try to postpone the treatment or tolerate the pain without compromising on their duties as a laborer.

The third point to remember is the innate trait of women to remain silent. This culture of silence is highly prevalent in rural India. Not only do they not speak up against any medical condition, which they face, they do not even voice their opinion against basic facilities, which are lacking from their life. For example, the need for secured bathing spaces is felt by all the women who either bathe in ponds, rivers or near hand pumps.

However, when asked if they had ever expressed their discomfort to their husbands, most of the women confessed that though they were not comfortable bathing in full public view they hardly ever told their husbands about it, because for them, bathing was a very trivial issue. One of the women said, “We can’t take so much time to bathe, we all have work to do and for a two-minute bath we cannot bother our husbands and ask them to build us a bathroom.”

For a woman in rural India, the opportunity cost refers to the benefit she could have received in the form of medical care, which she chose to give up, to take another course of action that would benefit the whole family. Financial constraints act as barriers that force a woman to prioritize her family’s need in favor of hers. This brings us to an important question: Is economic well being the answer to everything? Hypothetically speaking, will building bathrooms ever be on the list of a rural Indian household after taking care of their basic roti, kapda and makaan? After emphasizing on the issue of building toilets, it is now time to give bathrooms its due importance.

Meghna Mukherjee is a junior research fellow at the Centre for Development Research, Pune.

Meghna Mukherjee is a research fellow at Vikasanvesh Foundation, Pune.