Farmers in Sorapattu village have reduced the costs of farming inputs by curbing use of chemical fertilizers and embracing integrated pest management, which has resulted in higher incomes for them 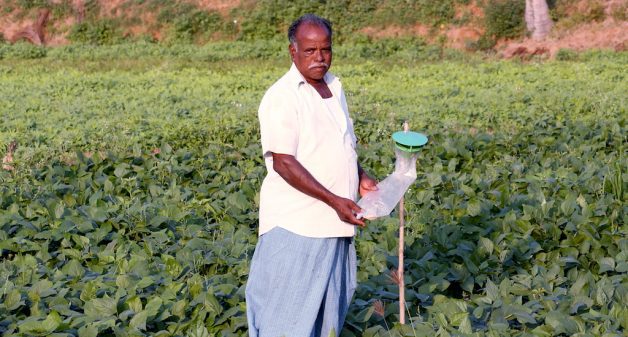 Murthy, who has adopted integrated pest management, has pheromone traps in his field of black gram. (Photo by R. Samuel)

“See that karikuruvi catching an insect,” says Murthy excitedly as a black drongo catches its prey and settles down on a bird perch nearby. His field of black gram, black-eyed pea and green gram are dotted with similar perches. Bird perches are an integral part of integrated pest management. Murthy is one of the farmers of Sorapattu village in Pondicherry who has embraced IPM.

Recalling his early days of farming, Murthy says, “We used to plough sanappai (Crotalaria juncea or Indian hemp) and erukku (Calotropis gigantea or crown flower) plants into the soil.” He would throw groundnut oil cakes and some plants while ploughing and that there was no chemical usage at all. N. Vijayakumar, an entomologist with Perunthalaivar Kamaraja Krishi Vigyan Kendra (PKKVK) in Puducherry confirms that it was a traditional practice to plough the foliage of plants such as Chinese chastetree (Vitex negundo), thumbai (Leucas aspera), Portia tree (Thespesia populnea) and Indian mulberry (Morinda tinctoria) into the soil.

Chemical fertilizers and pesticides came to be used in the 1970s during the green revolution. Earlier, farmers could control pests reasonably well with traditional methods using plant and cow derivatives. “After we started using chemicals, initially the yields were good. There were no pests. But over the years we started noticing a change for the worse,” Murthy told VillageSquare.in. “Pests increased only after we started using chemicals,” avers Ranganathan. The farmers recall feeling helpless about a decade ago, as their farm inputs kept increasing without any increase in their income.

This was the period when organic farming began to be seen as a sustainable method of farming. 45-year-old Krishnamurthy, who practices IPM, says he stopped using chemical fertilizers also after being inspired by the late Nammalvar, an agriculturist from Tamil Nadu and a strong proponent of organic farming.

During the same period, PKKVK started conducting farmer field schools, creating awareness about the need to curtail the use of chemical fertilizers and pesticides. Some of the farmers were skeptical initially. Others such as Murthy and Kalivaradhan decided to give up chemical pesticides and try IPM. “I could not control pests in my cotton plants even after spraying endosulfan. I had no choice but to stop growing cotton. So, I wanted to try IPM,” 60-year-old Kalivaradhan told VillageSquare.in.

Having observed pest resistance and learnt the ill effects of consuming vegetables with the residue of pesticides they were spraying, adding to the low income, there was a change in the mindset of the farmers to adopt IPM.

While a few stopped using chemical pesticides in 1998, slowly more farmers embraced IPM after seeing the benefits. Presently 90% of the farmers in Sorapattu village practice IPM. 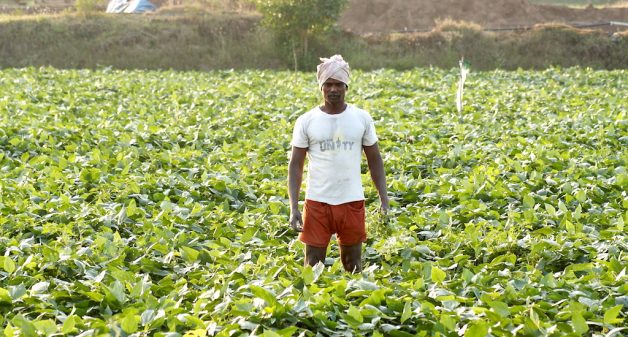 Ramalingam standing in his farm with a pheromone trap in the background. (Photo by R. Samuel)

The widely practiced aspect of IPM is using light and pheromone traps, besides yellow sticky cards and Tricho cards to keep pests under control. The methods are cost-effective, scalable and environment-friendly. To farmers in Pondicherry, PKKVK supplies IPM tools at a subsidized cost.

Farmers use light traps when they have an electric source in their field. The bulb is fixed on a stand that the same height as the plant. The farmer fills the vessel at the base of the trap with water and a layer of any oil such as coconut or castor oil. Insects attracted by the light fall into the vessel and the oil prevents them from flying off. The lights are turned on only from 6 pm to 9.30 pm. “That is the time the harmful insects come to lay eggs. After 10 pm, only beneficial organisms will come. To prevent them from falling into the trap, we turn off the lights,” explains Kalivaradhan.

To help those farmers who do not have access to electricity in their fields, private firms have introduced solar lamps and portable lamps with chargeable battery. M. Abdul Kadhar of SAFS Farming Enterprises sells three models with adjustable height and different features such as automatic timer that turns on the light at sunset and turns it off after three hours. These lamps are designed to emit light in the ultraviolet spectrum to attract insects.

Most farmers have one light trap per acre. Experts and farmers are united in their opinion that the light traps control about 70% of the pests.

To prevent further damage to crops, they use pheromone traps. Pheromones that insects secrete naturally to attract a mate are used as lure. “I have one pheromone trap per acre. The tablet containing pheromone has to be inserted into a tube in the trap,” says Ramalingam. The trap is fixed on a short stand, at level with the plants. The lured insects fall into a bag that forms part of the trap. The insects and spent lures are buried so that they do not inadvertently lure insects, as the latter would then not find their way to the trap. Murthy says the lures generally last one crop.

Murthy finds pheromone traps more effective than light traps. He shows the leaves as proof. Comparatively, lower number of leaves shows signs of having been eaten by caterpillars where he has fixed the pheromone traps. Kalivaradhan adds that insects do come in spite of the traps and lay eggs. When the eggs hatch and caterpillars and worms emerge, the farmers spray neem oil and apply neem oil cake at the roots.

Kalivaradhan resorts to yellow sticky cards when he plants brinjal, okra and cotton. “I use simple and cheap methods. I buy square oil tin cans and make four sticky cards with each can, by cutting it open. I paint the surface yellow and then apply grease on it. White fly, a pest seen in vegetable crops and cotton are attracted by the yellow colour and get caught on the grease,” explains Meera, who grows tapioca, groundnut and brinjal in two acres. The farmers clean the surface and re-apply grease frequently, so that it works effectively. The frequency depends on the number of insects that get stuck and the dirt that gets coated on the surface of the sticky sheet. Usually summer brings more insects and dirt, necessitating frequent greasing of the surface.

Pests such as stem borer, leaf folder and sugarcane borer affect crops, especially when the flowers start bearing fruits or grains, according to Kalivaradhan. Trichogramma, an egg parasitoid, is used to control these pests. PKKVK produces and supplies three strains of Trichogramma, as pests are specific to crops. The cards contain eggs of Trichogramma parasitoids, which on hatching enter the eggs that the pests have laid on the crops. The parasitoids lay eggs within the pest eggs. The larvae feed on the pest eggs, thus protecting the crops.

Meera uses Tricho cards when she raises paddy. “It’s the size of a postcard. It can be cut and used in four locations. I make a hole in the bottom of a paper cup and attach the card to it and tie it to a pole,” she explains. She uses the card in about fourteen locations in one acre.

Viruses such as nuclear polyhedrosis virus and fungi such as trichoderma are also used to control pests in IPM.  The bird perches, usually the same height as the crop, enable birds to catch insect larvae in the crops and flying insect pests.

Murthy, who spent about Rs 18,000 per acre, now spends about Rs 10,000. Meera and Kalivaradhan inform that their farm input has come down by about 50%, translating to improved income.

Vijayakumar explains that if an insect causes more than 10% damage, it is termed a major pest. He adds that in the first green revolution the strategy was to eradicate pests, whereas IPM is about maintaining biotic balance.

Kalivaradhan says that farmers like him who carried out the spraying needed heavier dosage of medicine even for common ailments, compared to those outside the farming community, because of the exposure to the chemical pesticides. Now the health issues have come down.

Murthy shows spiders and lady bird beetles in his farm, natural enemies or beneficial organisms that keep harmful pests under control. He adds that natural enemies have appeared in good numbers only after they stopped using chemical pesticides. These augur well for the farm and the farmers.