Women taking a bath in the open is a common enough sight in the countryside, which needs to change. For that to happen, it is important to change the mindset of men and their insensitivity towards the issue 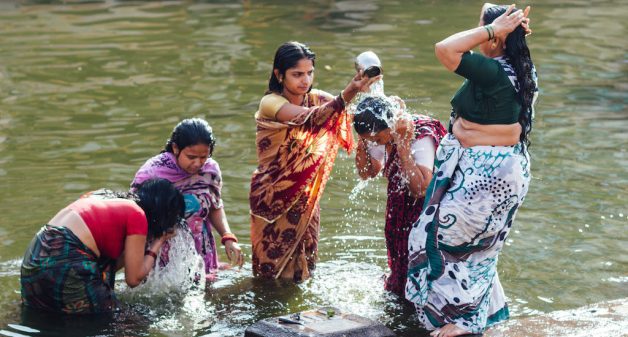 In many villages, an informally decided upon time is kept aside for women taking a bath in a group. (Photo by Adam Cohn)

My work has taken me scores of time into villages in almost all the states and at various points of time of the day. When travelling in the villages in the eastern states on numerous occasions, as the vehicle turns on winding streets in a village, I have at times come to suddenly confront a situation where a group of women is taking bath in the local pond. I have always felt at such times like a wholly embarrassed but unintentional witness. And the local men have tended to look at me as if I was a strange creature whenever I tried to discuss the matter with them.

Once I was travelling in the hilly blocks of Visakhapatnam district in Andhra Pradesh. The local contact showed me how he had persuaded the community to bring water by way of diversion to their village and how it was leading to cultivation on some additional land. After viewing all this, I asked him if the same water could not be used to help women take baths. He dismissed the subject as though it was of no relevance, saying that this was not an issue at all for the tribal people there. I asked him if he had spoken to women and he said such was not necessary. Had they spoken about it with their husbands, the issue would have surfaced, he reasoned. Apparently, gender justice or sensitivity and tribal customs are not in conflict in Nagaland alone.

Influenced by these observations, I had been trying to speak to many of my development colleagues and it is heartening to see that at times it works. In 2010, we were once walking down one hillside along the pipe that fetched water from the small diversion structure of the stream to the farms of the tribal farmers in Rayagada district of Odisha. At a point on the way, much laughter and gaiety including the voice of a rustic woman singing were audible from behind a clump of banana plants and thickly growing bushes. My colleague told me that they had arranged it so that the water that was coming through the pipe fell like a shower in this place and women were bathing. The sheer joy of freely bathing in a secluded private place and in abundant flowing water in this hot and humid weather gave them immense pleasure. Thereafter, wherever possible many interveners have tried to weave in the bathing place for women in their gravity flow schemes.

Last year once in Yeotmal district in Maharashtra, I was being shown the achievement under the Doha model by Late Madhukar Dhas. In this model, you deepen a streambed along its length with intermittent portions left at original levels. This creates a large number of water pools called Doha without any submergence or damming. Even an unseasonal March rain had filled all the dug out portions with abundant water. I was thrilled to see some deer drinking from the Doha since the stream was close to a thick wood.

I broached the subject of creating bathing spaces along the stream for women. Initial reaction was silence. “Our women never tell us they have any difficulty,” one man said.  But when I said to them that as adults they are aware of the reproductive cycles of women. “Each of you have a sister. Would you not want to create a system where your sisters feel safe and can enjoy a good bath every day and remain healthy?” I asked. That line of interaction makes a much bigger hit. Apparently, men are seldom sensitive towards problems of their wives but feel very concerned about their daughters and sisters.

In December 2016, I was visiting a thickly populated multi-caste village in Marathwada. Wonderful work of a tank de-silting was done in that village. The villagers were going gaga about how the water problem of the village was now completely solved. After admiring their collective action in restoring the pond, I suddenly asked them how many of their homes had bathrooms where their womenfolk could take bath. Only one hand was raised in a group of some 20 men. I suggested to them that now that the water problem was solved, could they not think of pooling money to build a complex where there would be safe and private bathing spaces for women.

The leader of the group told me, “We are Marathas. Our women will not go to take a bath in a public bathroom.” So I asked, “if no one has a bathroom in the home and if their women can not go to a public bathroom, where do they manage?” I was told that at certain hours informally decided by the community, women bathe in the open near the pond that was de-silted. I asked the leader whether he had a daughter. He did. She was studying in a college he proudly told me. Then I asked him how would he feel if I was watching when his daughter was taking a bath.

Before the visibly angry man could get up and strike me, I went on to tell them about how a well-known medical professional, Abhay Bang, had studied and reported that there are many ill effects of an improper bath on the reproductive health of women. The group agreed to think of a way of addressing the issue.

Usually, villages in which women take bath by a water source have an informal consensus among the community regarding both the space and time of the day when women go there. Such places are open to the sky. Women go there in a group, bathe presumably with their clothes on, change and dry their clothes along with the rest of their washing and return home at the end of an hour or two. This may happen absolutely in public view in a pond or at a relatively secluded place in the course of a stream. This issue is less of a problem if the village is small and remotely located. The issue can be serious in thickly populated multi-caste villages such as the ones that dot Uttar Pradesh or Bihar.

The problem perhaps intense for the very poor mahadalit families in Bihar, who live in small thatch-roofed hovels made of jute sticks since they have no space at all to bathe within their homes. The problem becomes intense indeed in all regions where water is to be fetched from a distance. Womenfolk get so tired in bringing head loads of fuelwood, dung fodder or grasses and water for their homes that they often ignore the need to bring water for their own bath. And the problem is extremely intense in villages experiencing water scarcity and where the minimal quantity of water is available by way of supply in tankers.

I have often wondered why so much sound byte and money is devoted to the building of toilets but none to the creation of private bathing spaces. One possible explanation about the unilateral focus on toilets is that open defecation leaves human waste that strongly hurts our urban nostrils and becomes an ugly eyesore. Of course, there is also the evidence of the terrible trouble of many kinds it thrusts by impacting on the dignity of women. To be fair, toilets at home eliminate this problem. They also do reduce the spread of certain kind of pathogens in comparison to open defecation, but saying that they will control all water-borne infections is fooling oneself.

What about bathing spaces for women? As per the data from Census, a dominant majority, in some districts as much as 90%, of the households do not have covered bathrooms within their premises. Without covered bathrooms offering sufficient privacy, where do women bathe?  What effects does this have on them given their reproductive biology? No one has thought seriously. Most men in policy making circles are perhaps blissfully unaware of something that is not publicly discussed at all: namely the adverse health consequences of the absence of private bathing spaces for women. Literally, out of sight is out of mind. 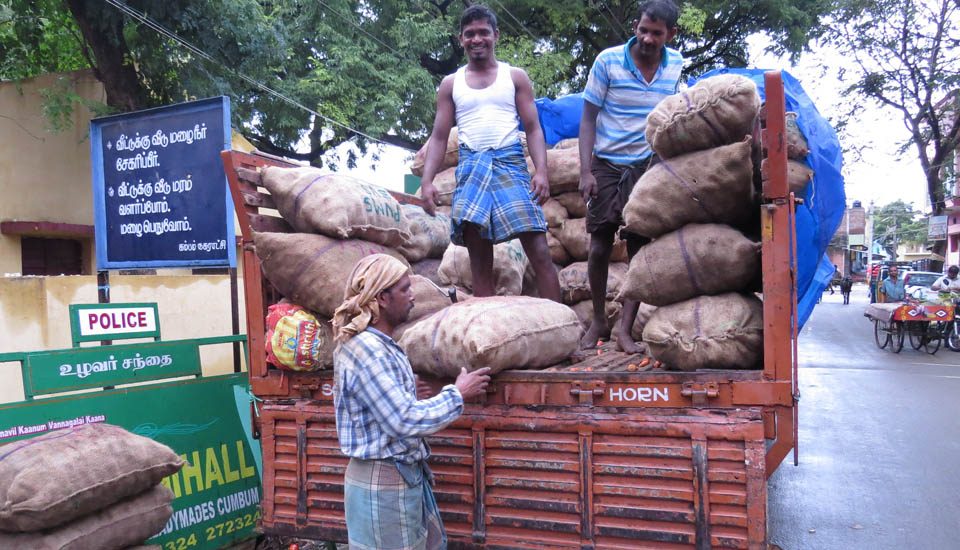 Collective selling of their produce offers members of farmer producer companies many advantages in terms of trade, logistics and credit terms (Photo by Jency Samuel)

How some FPC balloons can become durable high flyers – III