The VNR-Bihi variety of guava, which often weighs more than half a kilo and has a long shelf life, is being adopted by farmers across the country in large numbers as it fetches handsome returns 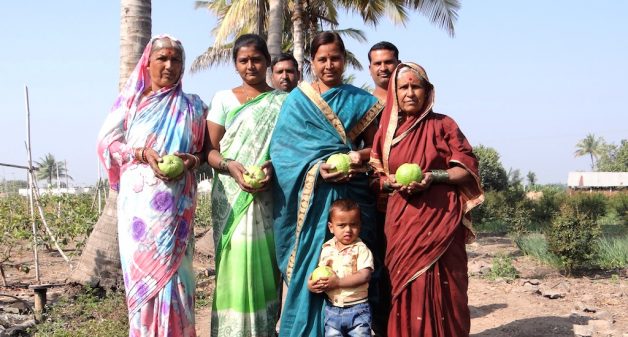 “They sell like piping hot vada pavs despite being so expensive,” exclaims middle-aged fruit vendor Syed Karim, referring to the huge guavas sourced from an orchard in Raipur, Chhattisgarh that retail at Rs 150 a kg. Karim runs a roadside makeshift stall in the busy Kalbadevi Market in South Mumbai.

The VNR-Bihi guava is so big, ranging from 300gm to 850gm, that it is said that one fruit is enough for a family. What tips the balance in favor of this variety is its size, long shelf life, less number of seeds and its premium price. These are reasons enough for farmers to opt for it. One such is software engineer Neeraj Dhanda, who quit his job and now tends to the 1,900 guava trees growing on his 3-acre plot in Sangatpura village in Jind, Haryana. Another is plant pathologist Krishna Reddy raising 850 plants on his plot in Wanwara, 50 km from Bengaluru.

The examples can be multiplied many times including agriculturist Sanjay Nikam of Malegaon in Nashik, Maharashtra, growing 500 plants on his 2-acre plot, which fetches him around 17 tons, which he prefers to sell to a Surat-based trader rather than locally; former banker Veera Prasad who having taken voluntary retirement from NABARD (National Bank for Agriculture and Rural Development) planted 2,000 saplings of VNR-Bihi in 2014 on his four and a half acre plot in Narsapur in Medak, Telangana; and 25-year-old Viswa K., who has been growing the fruit since 2014 on his family’s four-acre plot in Samatur, Coimbatore.

Having been brought to the shores of Goa in the early years of the 16th century, the Portuguese explorers called it pera. The locals called it peron (Konkani) and as the fruit travelled inland it gathered new names — peru (Marathi), pyara (Bangla) and amrood  (Hindi), as it was called in Persian. Mildly sweet and mellow in taste, the word guava is derived from the Arawak name for the fruit, guayaba. Rich in Vitamin C, the guava became a favorite among sailors, often victims of scurvy.

In the India of yore, a land known for its mangoes, the new fruit was often compared to the sunshine fruit and called saphari aam (journey mango). In the five centuries since its arrival, the guava has become naturalized and presently we have around 30 plus varieties grown in the country. Of these, the prima donnas are Lucknow 49 and Allahabad safeda — both large in size, roundish in shape, with a white pulp, very sweet and tasty. 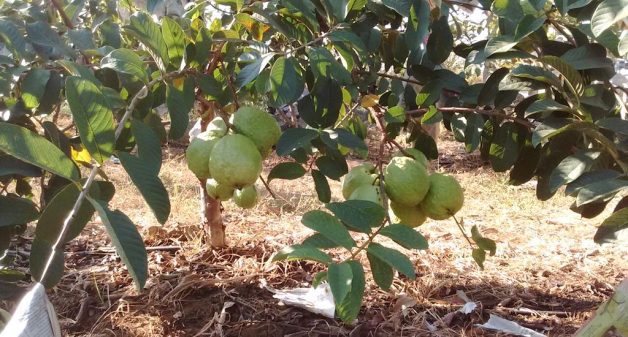 The VNR-Bihi hanging low in an orchard in Narsapur village of Medak district in Telengana. (Photo by Veera Prasad)

Joining this babble of Psidium guajava variety in the last couple of years is the jumbo guava, called VNR-Bihi. So popular has it become that chances are that in a decade or so it’s very likely that VNR-Bihi might achieve the status of the Grand Naine in the case of bananas or the Taiwan 786 papaya, edging out others. The reasons are obvious. It’s relatively large, ranging from 350gm to an astounding 1250gm (similar to a papaya), has low sugar content than its elder cousins and sold for as much as Rs 150 a kg.

The man behind VNR-Bihi is Narayan Chawda, a farmer from Gomchi village in Raipur district of Chhattisgarh. Having come across a Thailand guava, Chawda was impressed by its shape, size, crispiness, taste, less number of seeds and long shelf life. Chawda, who has so far developed over numerous varieties of vegetable and fruit crops, initiated a breeding program for a guava that would suit India’s agro-climatic conditions and palate, way back in 1996.

In 2009, VNR-Bihi was planted on the 126 acre-farm of Pravin Chawda (no relation to Narayan Chawda). The world at large came to know of the jumbo guava when the Raipur-based VNR Nursery participated in the 2011 Kisan Exhibition held in Pune. Presently VNR-Bihi has 1.5 million plants in farmers’ field, spread across 4,500 acres in 20 states, grown in rain-fed conditions, harvested twice a year in the western parts of the country and thrice a year down south, except Kerala.

Commenting on the farmers’ fascination for the new variety of guava, Maharashtra-based consultant horticulturist Rajendra Deshmukh told VillageSquare.in, “They are very forward looking when it comes to adopting a particular fruit. They are not content selling their produce locally but think nationally because it assures them better returns. VNR-Bihi being very distinct and different due to its size and premium price has caught their fancy.”

According to the National Horticulture Board, the area under guava cultivation in India increased by 64% from 94,000 hectares in 1991-92 to 1,55,000 hectares in 2001-02. In 2001-02, India had a harvest of 1.7 million tons, majorly grown in States like Uttar Pradesh, Bihar, West Bengal, Maharashtra, Chhattisgarh, Tamil Nadu, Karnataka, Madhya Pradesh, Gujarat and Andhra Pradesh. The fruit is exported to the USA, UAE, Saudi Arabia, Netherlands, Kuwait, Jordan, etc.

Farmers growing VNR-Bihi have achieved fruits valued in the range of Rs 2 to 5 lakhs from 450 plants, spread on an acre. Prices have ranged from Rs 80 to Rs 150 a kilo.

“We were awed by the fruit quality and adopted the planting of VNR-Bihi under the MNREGA scheme involving the adivasis of Mayurbhanj district,” says D.D. Patra, Deputy Director, Horticulture Department, Odisha. In 2013, it planted this variety of guava on 50 acres of adivasi-owned land and complemented it with an additional 250 acre in 2016. The Mahatma Gandhi Rural Employment Guarantee Act (MNREGA) is India’s flagship jobs guarantee program.

The keeping quality of the fruit ranges from 7-10 days in normal conditions and 20 to a month in controlled temperatures, which works in its favor among growers. “Guava varieties like Lucknow 49 or Allahabad Safeda, the Honey Dew papaya or Sapota, all have excellent taste, but due to their short shelf life, have failed to attract the national market,” A. R. Pathak, vice chancellor, Junagadh Agriculture University, told VillageSquare.in. “However, this is not the case with VNR-Bihi.” Appreciative of VNR-Bihi’s performance in a farm in Bahruch, Junagadh Agriculture University has planted its saplings in its plots in Nanakanda in Surendra Nagar and Talaja in Bhavnagar.

According to the Central Institute of Post Harvest Engineering and Technology (CIPHET), 18% of fruit and vegetable production — valued at Rs 133 billion — is wasted annually in India. Two of the biggest factors related to food losses are the lack of refrigerated transport and the lack of high-quality cold storage facilities.  In such a grim situation, the enthusiasm for VNR-Bihi may be short-lived, thanks to the lack of warehouses closer to villages.

Efforts by organizations like Greenpeace, which installed the crowd-funded first ever solar-powered cold storage in Kedia, Jamui (Uttar Pradesh), are likely to go a long way in empowering the growers and usher a new life to the food processing sector. For instance, guavas can be dehydrated and powdered; ready-to-serve beverage made, and guava juice wine and guava pulp wine can be manufactured from ripe fruits.

Putting the issue of food waste in the right perspective, Mukesh Chawla, Business Development Executive, India Logistics Expo, writes in a Linkedin post: “While many of us may raise eyebrows on these statistics, unfortunately, these have not moved our law makers. While the Parliament and media have more than engaged themselves on a question of Rs 288,000 crore spent on Food Security Bill, unfortunately, they have not shown even a fraction of seriousness towards yearly loss of £44,000 crore due to food wastage. Stopping the food wastage should be the prerogative of the food security of the country.”