Not content with just building toilets, the village in Neemrana block of Alwar district has started implementing a solid and liquid waste management plan that includes segregation of trash at source 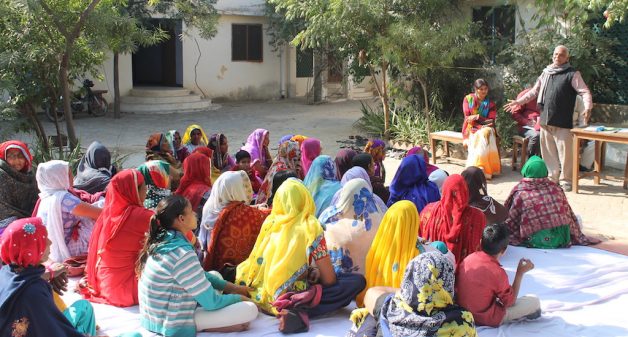 A women’s workshop on cleanliness in progress in Majra village. (Photo by Tarun Kanti Bose)

Majra, a village in Neemrana administrative block of Alwar district on the Mandhan-Behror Road and surrounded by the Aravalli range, is fast emerging as the cleanest village in Rajasthan. Located some 120 km from Delhi, a campaign to make the village free from open defecation was launched much before the Swacch Bharat Abhiyan (Clean India Campaign).

The village council, a proud recipient of Nirmal Gaon Puraskar (Clean Village Award) in 2013 by President Pranab Mukherjee, is now putting in practice its own solid and liquid waste management plans. Red and green dustbins of 10 liters each are being distributed to every household in the village. Panchayat functionaries are explaining them to throw the biodegradable waste in the green bins and non-biodegradable in the red. Schools, anganwadis (day care centers) or any other institutions in the village are given 100-liter plastic dustbins.

Settled 400 years ago, the Majra village panchayat, which comprises of two villages —Majra and Basai Bhopal Singh — has a population of over 5,000. Predominantly a Yadav village, people from different castes live amicably here. Nestled in the semi-arid zone of Rajasthan, the declining saline groundwater has made farming non-profitable, so the villagers opt for other professions, which include teaching or joining army, police, paramilitary forces or find gainful employment in odd jobs in nearby Rewari, Alwar or Jaipur towns. Many of them have even migrated to Delhi and Mumbai.

Sitting at Atal Sewa Kendra, the panchayat office, upsarpanch (Deputy Head), Ram Singh Yadav, who retired from Rajasthan Police, remarked, “In our area, women are generally deprived of independent decision making powers and still tend to remain under socio-cultural constraints. Shedding their purdah (veil), which is very much in vogue here, women are at the forefront of making Majra and nearby villages open defecation free.”

Taking cue from upsurpanch’s remark, Bhagwati Devi, a woman ward member of the panchayat, told VillageSquare.in, “Few of the men, who had a habit of defecating in the open, resisted women’s endeavor. We adopted Gandhigiri (Gandhian methods) to persuade the men. Now 100% of the houses in the Majra village panchayat have toilets and none of the villagers defecate in the open. Majra village is cleanest compared with Basai Bhopal Singh.”

Rajni Yogi, who had spearheaded the cleanliness campaign involving village women and schoolgirls in tandem with the panchayat functionaries, said, “Social Action for Human Resources Development (SOHARD) is at the core of the campaign. Propelled by SOHARD, we came out of our houses to stop open defecation in the village. In every house, toilets were constructed, which won the village panchayat the Nimal Gaon Puraskar. It bolstered the confidence of the villagers.” 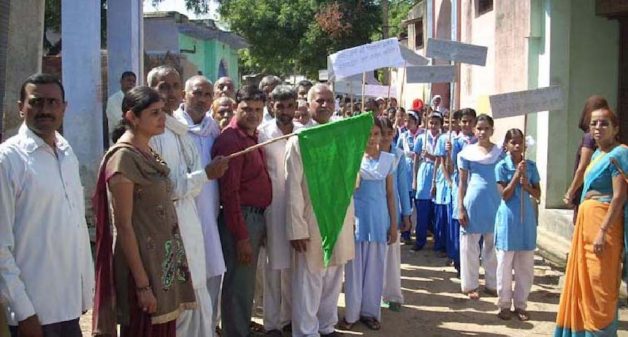 Schoolchildren in Majra taking out a procession in support of cleanliness. (Photo by Tarun Kanti Bose)

Adding to Rajni’s remark, Pavitra Yadav, a SOHARD functionary, said, “Village women and panchayat functionaries were trained in the workshop at the SOHARD premises so that they are full-fledged involved in cleanliness campaign in Majra village. After that Block Development Officer (BDO) in consultation with the Sarpanch, ex-Sarpanch, Anganwadi workers, villagers and SOHARD orientation workshop was conducted to plan out the objectives pertaining to Solid & Liquid Waste Management (SLWM). Post to the consultation, structured baseline survey of each and every household was done. The household survey covered the aspects like demographic details, basic amenities, attitude and perception towards health and hygiene, attitude and practices related to waste management. Then, the Participatory Rural Appraisal (PRA) with Focus Group Discussions (FGDs) was organized at a temple in Majra, where the majority of the villagers gathered in the exercise of village and resource mapping.”

The lanes of the village are squeaky clean, all drains are unclogged and lanes are free of dirt. A smart waste management system is on the anvil. To make it happen, the panchayat is distributing two dustbins, one for dry waste and the other for wet waste, to every house in the village. Safai karamcharies have been appointed to collect waste from the individual household. Tricycle and pickup with compartments are put in place to collect waste from the neighborhood dustbins. Deeper drains have been constructed with proper slopes as per gravity, which ensures the smooth flow of water to the end point. If the drains are blocked in any particular street, then that household in that street takes the responsibility of making it unclogged.

Explaining the SLWM plan, Dinesh Sharma, a local scribe, who has been fully involved since the beginning, told VillageSquare.in, “The processing of waste will be at the household level as there will be compost pits for the bio-degradable waste. Villagers, who have 3 to 4 animals, especially buffaloes and cows, can also have biogas plants. Solid Waste Management Recovery Resource Centre on a cremation ground at Majra village in 900 square feet area has been constructed which includes a platform for segregation, compost pit and a recovery centre for recyclables, grinder, and crusher for plastic will be placed. For liquid waste management, soak pits are constructed at the household level. In the low-lying areas, where water gets stagnated, soak pits are built. Lined drains have been built along the roads and its regular cleaning is done. A filtration plant will be installed at the final outlet of drains at the johad (pond).”

Door-to-door canvassing for drumming up the support, prabhat pheries (morning walkabout) and rallies by schoolchildren have proved to be a booster for all-out involvement of the villagers. The mass-cleanliness awareness campaign brought the villagers out for putting their bid in cleaning the streets. If Safai karamcharies fail then villagers come forward in cleaning the blocked drains. Shramdaan (voluntary labour) by the villagers ensures Majra to attain high cleanliness and hygiene standards.

As Niranjan Sharma, who leads the NGO SOHARD, said, “Women are the prime movers. What has happened today is all due to the former sarpanch, Bhoop Singh Yadav, who was elected thrice. His endeavor in the eradication of open defecation, which is prevalent across much of rural India, with toilets for each of its approximately 95% households, had its effect on the cleanliness campaign. He instilled a sense of hygiene among the villagers and was very particular about sanitation. He helped the villagers to build toilets in their homes.”

“Villagers themselves have taken the responsibility not to throw trash in the streets. Recently, a private company has come forward to construct toilets in all the schools of the village. The kitchens serving midday meals in the schools are clean,” he told VillageSquare.in. “Solid and Liquid Waste Management in the village will add further impetus to its cleanliness and sanitation drive. The trickle of visitors or panchayat officials from different districts of Rajasthan, Punjab, and Haryana has encouraged the villagers to be alert and they regularly clean its lanes and clogged drains. Villagers have learnt that if they clean daily the village and the surrounding areas will be spick and span and it’s good for their health. With less of medical facilities in the village, cleanliness was seen as vital to prevent the spread of disease. The village is a shining example of what we all can do if they join hands and use their resources responsibly. Majra is setting the standards of cleanliness in Rajasthan.”