An alarming 95.31% of rural households do not have a bathroom within residential premises, according to a village level analysis of Odisha using Census 2011 data. Although the analysis was restricted to one state, similar trends are to be found all over the country. Such severely limited access to secure bathing spaces in rural India has received virtually no attention. Civil society organizations working on women’s issues have not explored the issue in any detail. There is a clear need to look at the hardship faced by rural women due to the lack of secure bathing spaces with access to water.

Like any other place in India, rural households in Odisha that do not have water within premises, women bathe fully clothed in open sources of water such as ponds, streams or hand pumps. Since they bathe in groups (for safety and a degree of anonymity), their daily schedules are necessarily constrained. The practice also discourages inappropriate behavior by men.

However, bathing hurriedly in the open highly compromises the personal hygiene of the women. Women often have to walk long distances, even in adverse weather, to fetch water for their household chores. In such pressing situations, they tend to neglect their own selves. During discussions with rural women from Muniguda block of Odisha, there were complaints about their travails related to bathing and cleanliness. The women rationalized that they have to endure this since they were poor and lived in the neglected countryside.

A detailed village level quantitative analysis of Odisha using the Census 2011 data was undertaken. In a cross-sectional analysis across villages in the state, a high positive correlation was found between the number of households with latrine within premises and the number of households with a bathing facility within premises.  In statistical terms, when two things are correlated, it means that they vary together. Positive correlations mean that high scores on one variable are associated with high scores on the other. Are these two things then complementary goods? 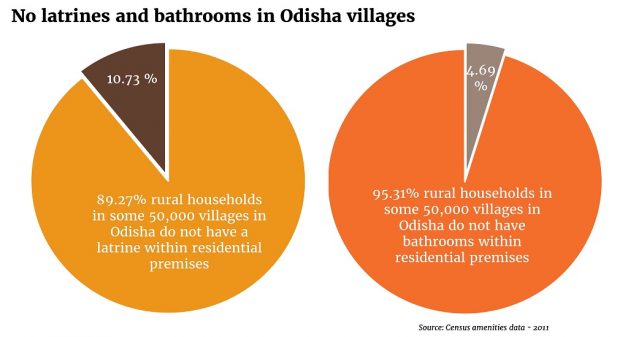 It was also found that for every two households that have a latrine within premises, only one has a bathing facility. This appears logical. Apart from this, in attempts to correlate an association between the location of drinking water and access to private bathrooms, it was found that almost none of the households that have water sources located away from home have bathing facilities within premises.

Are privacy and personal hygiene of women not equally important as sanitation? Perhaps the lack of awareness about the association between lack of privacy and security in bathing and the health issues faced by women has not led anyone to undertake such an analysis. Clearly, bathing in full public view reduces personal hygiene and this has health consequences.

It is well known that ascent of pathogenic organisms due to poor hygiene from the reproductive tract to the fallopian tubes and ovaries results in various kinds of gynecological morbidity. A 17-year-old explained how she could not clean her private parts in the open and thus itching was a quite common thing for her.

In subsequent fieldwork in an Odisha village, it was observed that very few villages have water pipelines connected to their houses. That is why the rural women prefer carrying only that much water that is required for their domestic purposes, other than their own bath. “Why build a bathroom when we have to carry that much more water covering large distances? I would rather bathe in the pond and carry only the required amount home,” said a middle-aged rural woman. Clearly, both the Census analysis and field work reflect the common sense conclusion that access to water tends to govern preferences on bathing places for women.

During a visit to another village, an old lady who had just returned home after taking a bath in the pond was asked why she wasn’t using the bathrooms built by the government under Indira Awas Yojana. She answered, “The government has built bathrooms but has made no arrangement for water supply.” Pointing to a tank far away, she said, “In order for us to make use of the bathrooms, it is important that a pipeline is constructed, which would get water from that tank to us here.” 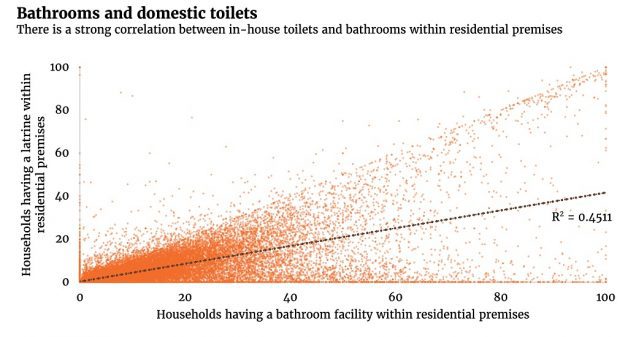 It appears that for the rural households having drinking water facility within premises, the chance of the presence of bathing facility is also higher. Perhaps building a secure community-based bathing space with assured access to water would make a difference to rural women’s lives.

Community sanitary complex, one of the components of Swachh Bharat Mission Odisha, promises to build bathing cubicles along with toilets in places that are accessible to all in a village. As the number of household toilets built by this program in India keeps increasing, can we expect that secured bathing spaces will be accessible to the rural population as well?

Analysing the villages of Odisha is just one glimpse of the available facility of bathing within premises. The national picture is not much different. According to Census 2011 data, over 74% rural households in India do not have private and covered bathing space within their premises.

Community-based spaces for bathing would make the daily life of rural women easier. A superstructure with four walls of hollow bricks and a drainage facility will cost much less than the amount to build a toilet but the challenge is to channel water into the bathroom. This issue can be worked out depending on the region because of variation in land type, the source of water, population density and so on.

For example, in a water-scarce region of Udaipur district in Rajasthan, an NGO has brought well water to a toilet through pipes. For this, the well was renovated and then a 400 feet pipeline was connected to provide access to water to around 20 households. Women expressed their relief after this arrangement as some had to travel around 3 km of uneven land to get water for household chores.

If this arrangement is possible in a village of Rajasthan, which has a highly undulating terrain and houses are built over hillocks, is it not possible in other parts of India? This issue of limited access to secured bathing space needs immediate attention. When the movement of building toilets under the Swachh Bharat Mission is in a full-fledged mode, it is time to find a way to integrate secure bathing spaces with access to water in that program.