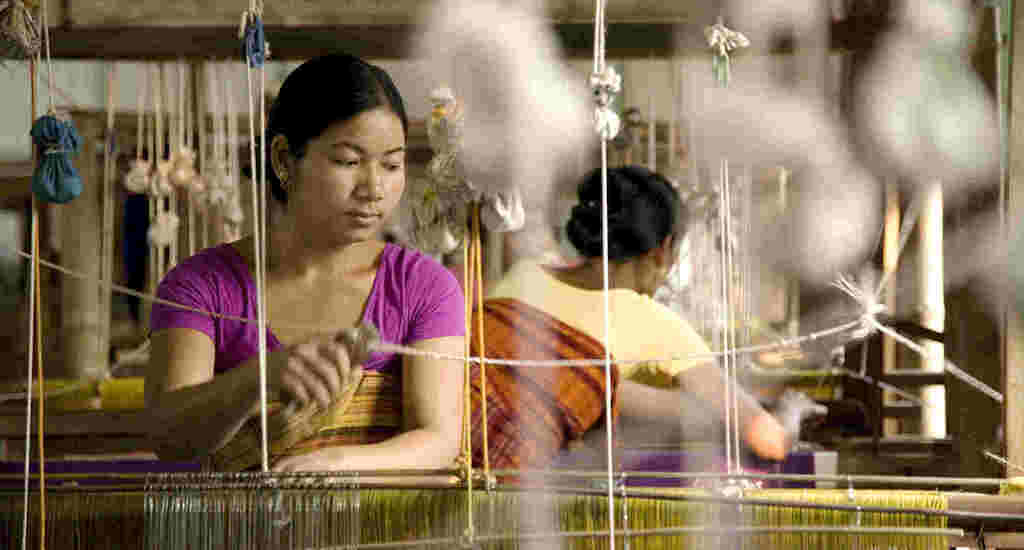 A Bodo woman working at a traditional handloom in Rowmari village. (Photo by Action for Northeast Trust)

When the Aie River, a tributary of Manas River, swallowed Sabina Begum’s house, all she could salvage was the tin that helped her to build a new home. Now living in a ramshackle shanty in Odalguri village in Chirang district of Assam, she is not sure whether her family has to move again to escape the increasing ravages of climate change. Her husband’s job as a government school teacher allowed them to pay for the land, which typically should have been bought by the government since they are climate change refugees.

There are many such families in this district of western Assam that is under the administrative control of sexyxxxsexyxxxsexyxxx.ccBodoland Territorial Council. The area around Odalguri and neighboring Rowmari villages are filled with families who are either climate or conflict refugees but who have received little or no government assistance to cope with their distress.

For instance, Ayesha Khatun, who also lies now in Odalguri, says that just two of the houses in her village including her own had survived the onslaught of the ever-increasing denudation by the Aie River. Ayesha’s daughter was one of the few young women in the village pursuing a B.Sc. degree, remarkable in an area where 34% of women are married off before the age of 18 years. Khatun is worried whether they would last till the next monsoon, given that sand mining and stone quarrying in the village may worsen the problem of erosion.

As the sun sets in the distance, orange and gloriously beautiful, promising a clear star-filled night, one is compelled to ponder the future of these internally displaced people, who may continue to be so for the foreseeable future. The Bodoland Territorial Areas District, the political home of the Bodos, include the districts of Chirang, Kokrajhar, Odalguri and Baksa.

The problem of displacement is acute in Chirang, triggered by climate change and ethnic violence. There have been several incidents of ethnic violence prior to the creation of Chirang, and since it came into being, with the most recent being in 2014 in Kokrajhar. A combination of climate change and ethnic conflict with poor development indicators has contributed to a large internally displaced population in Chirang.

Chirang has a total population of 481,818, of which nearly 15% are children under the age of 6 years, according to Census 2011. Seventy percent of the population practices agriculture, and paddy is the major crop. The total cultivation area is 60,239 hectares, although the land is not fairly distributed. There are seven reserve forests in the district. Seasonal floods are a constant problem affecting sizeable portions of the population. The floods in 2013 affected 83 villages, 177,061 people constituting nearly 37% of the total population and damaged 624 houses, according to official data.

The ethnic mix is variable in the villages, with 30-40% Bodos, an unknown but substantial population of ethnic Bengali Muslims and a smaller percentage of Koch Rajbongshis who are agitating for scheduled class status in Assam, Nepalis and a few tribals called Baganiyas though they do not have scheduled tribes status in the state.

Even if peace reigns in this area, the inexorable march of the Aie and Manas rivers are sure to wreak havoc on these villages. It’s not as if the Bodo villages are prosperous; they are just slightly better off than the Bengali Muslim villages. Their children look less malnourished and have more protection against the elements. If the river threatens them, because they are in their homeland, they can organize to erect dykes, at least temporarily protecting them from the water.

The other stories are perhaps familiar. As in some parts of rural India, farming has become precarious because of climate change, both in terms of monsoon and in terms of the availability of land. Also, similar to other parts of the country, the younger generation no longer wants to farm, so out-migration is on the rise, especially for men.

Years of conflict have eroded people’s spirit. Mental health problems are rife, many of which are admirably dealt by clinics run in the Chirang district by the Action for Northeast Trust (ANT), a non-profit organization working for over a decade in the area. There are multiple incidents of suicides, attempted suicides, murders, domestic violence, and addictions. Substance abuse and gambling are ongoing problems including alcohol and opium addiction, the latter particularly an issue among the younger boys. While the students’ union brings young men together for various activities, opportunities to interact and encourage positive coping methods rather than these mal-adaptive coping mechanisms are few for the men.

In an area riven by ethnic conflict, peace seems fragile. Much of the conflict in this region is over the question of indigeneity. Who are indeed the original inhabitants of this place? And what does original even mean in this context? In Rowmari, where the Bhutanese ngultrum is the currency of choice, with frequent economic migration to Bhutan, including daily wage labor across the border, the question of indigeneity may seem somewhat farcical, an elaborate political joke. One ngultrum helpfully equals one rupee, which has helped this rural and remote area ride over the demonetization crisis.

Shafiq Ali, who lives in Odalguri, is a disabled, ethnic conflict refugee from the riots in 2012, who even after 4 years has still not managed to buy land to build a house for his family. This wave of conflict was between Bodos and Bengali Muslims that affected the districts of Chirang, Kokrajhar and Dhubri. Official death toll cites a figure of 400, though many more people are believed to have died. With farming supporting a very large family, there is no money to pay to purchase a parcel of land.

In the late 1990s, after much litigation, the government gave just about an acre of land each to the Bengali Muslims in this area affected by conflict. There are many families that continue to stay in temporary dwellings, unable to pay for land to buy their own home, though the 2011 Census figures indicate that 99% of the residents live in own homes, but just 1.8% live in brick and mortar houses, not a bad thing by itself, but when seen with other development indicators presents a troubling picture of the place.

Poverty has deepened in Chirang. The latest district level household and facility survey shows that 86.8% have a low standard of living index, 40% of children are stunted and 33% have a below the poverty line card. The National Family Health Survey of 2014-15 indicates that female literacy at 63% is lower than the state average, though the sex ratio for children under 16 is much higher than the state average at 1,105 females per 1000 males, perhaps due to the large tribal and Muslim presence.

But the picture is not all grim. The comforting and rhythmic click-clack of the handlooms continues well into the evening in the ANT campus. Bodo women are up and about, chatting, singing, listening to music as they continue to weave, keeping a millennia-old tradition and a source of livelihood alive, now also made precarious because of the pressures from the market to adopt power looms. In the warp and the deft of the fabric, one can see the culture and their lives unfold.

To be sure, this should not be misinterpreted as resilience. Too much has been made out of the philosophy of jugaad (make do), which has been a convenient exit strategy for the welfare mechanisms of the state. But it needs to be noted that even at the margins of survival, there’s hope, laughter and the unwillingness to surrender. Life continues even in these zones of abandonment.

Names have been changed to protect identities. The views expressed are personal.

Sreeparna Chattopadhyay is Assistant Professor at the School of Development in Azim Premji University, Bengaluru.

Sreeparna Chattopadhyay is Assistant Professor at the School of Development in Azim Premji University, Bengaluru.