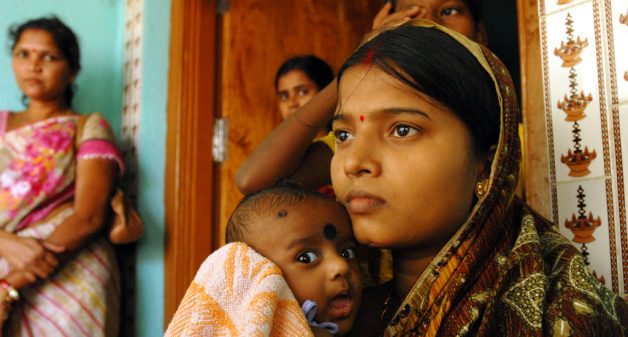 A patriarchal society in India ensures that married women are responsible for contraceptive use. (Photo by Pippa Ranger/Department for International Development)

The latest round of National Family Health Survey (NFHS) 2015-16 data shows a declining trend of modern contraceptive use among married people. The data released for 35 states so far reveals that 13 out of these show a falling trend of modern contraceptive use. Although modern contraceptive use in rural areas has increased a bit, the sharp decline in the urban areas has led the overall use to decline. The findings come as a shock as we march ahead with India’s Family Planning 2020 vision, which promised to provide family planning services to 48 million new women in the country by 2020 at the London Family Planning Summit in 2012.

Contraceptive Prevalence Rate (CPR) is one of the key indicators to understand the status of family planning. In simple terms, it refers to the proportion of married women in the reproductive age group (15-49 years) who or whose partner is currently using at least one method of contraception. Lower CPR has been studied to have adverse effects on a nation’s demography overall health of women and children in a country. 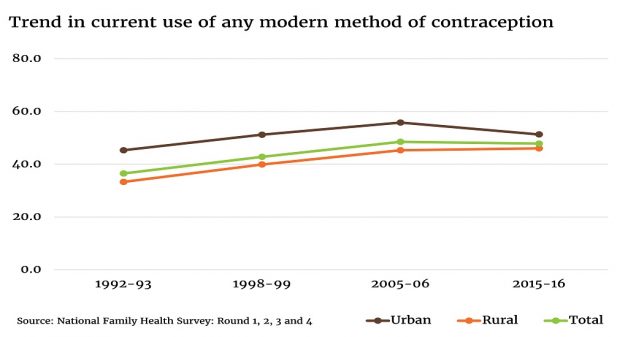 What’s more discomforting is the differential uptake of permanent methods of contraception among men and women. Distribution of contraceptive use reported in NFHS 2015-16 reveals that among men using any modern method of family planning, only 5% are using the permanent method. It is twice as much in rural areas than in urban areas. In comparison, female sterilization contributed 86% of the overall modern contraceptives used by women. It is almost the same for both rural and urban area.

The figures speak for themselves. The burden of contraception is clearly on women. Not much has really changed in the pattern of contraceptive use among couples in India in last 10 years. Although men have an equal duty towards family planning, they don’t share equal responsibility. In a patriarchal society, the responsibility of family planning is automatically assumed to be that of women.

For the past several decades, men have harboured misconceptions about vasectomy and not stepped forward to shoulder the responsibility of family planning equally with women. Vasectomy has been avoided by men partially due to the turbulent history attached to it in India and partially due to the misconceptions among men that they will lose their libido or that they will not be able to do strenuous work or lift heavy objects after vasectomy.

The lower uptake of male contraceptives seems primarily to be caused due to lack of awareness and willingness. Though this has been a persistent issue for years, little has been done to address these problems. Making men to shoulder the family planning responsibility will take persistent efforts in the form of awareness campaigns, inter-personal communication strategies, and mass movements. Even policy makers and programmers need to take up the challenge of involving men in achieving the family planning goals rather than just strategizing to increase the uptake of contraceptives by women. 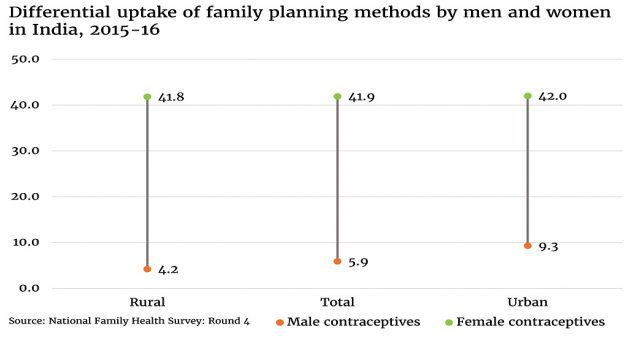 In 2012, India committed to provide family planning services to 48 million additional women by 2020. This translates to reaching a modern contraceptive prevalence rate (mCPR) of 63.7 in the next three years. Although the current mCPR for the country is still being calculated by NFHS, early trends from 28 states show that the mCPR has decreased for 13 states in the past decade. This is an alarming finding and poses a serious threat to achieving our global Family Planning commitment.

Elephant in the room

In such a scenario, uptake of contraceptives by men seems to be the elephant in the room that no one wants to talk about. Women have been sharing the larger portion of the family planning responsibility till now and the portion seems to be stagnating leading to slower movements in mCPR. Interestingly, all of the 15 states that have shown an increase in the mCPR have also shown an increase in the use of modern contraception by women. On the other hand, of the 13 states that reported a decline in mCPR, none of the states have shown any improvement in the uptake of contraceptives by women.

The findings underscore that to increase the overall mCPR, the focus should now be shifted to increasing the uptake of contraceptives by men. Acknowledging that the uptake of contraceptives by men has remained low for several decades, multi-pronged strategies need to be adopted to break the age-old barriers. While awareness campaigns and mass media efforts form a part of the strategy, expanding the basket of choice for men will also be a key strategy to increase uptake by men.

The current basket of choice for men is limited to the vasectomy and condom which is very limited as compared to the choices available for women. Long-term commitments are needed both from public as well as private sector to invest in research and development for male contraceptives.

Over and above all, men need to step forward to be at par with women in sharing their family planning duty. The onus is now on men to take a cue from women braving sterilization procedures and stop shrinking away and shifting their part of the family planning responsibility on women.

Itismita Pradhan is a Research Associate at Sambodhi Research & Communications.

Itismita Pradhan is a Research Associate at Sambodhi Research & Communications.