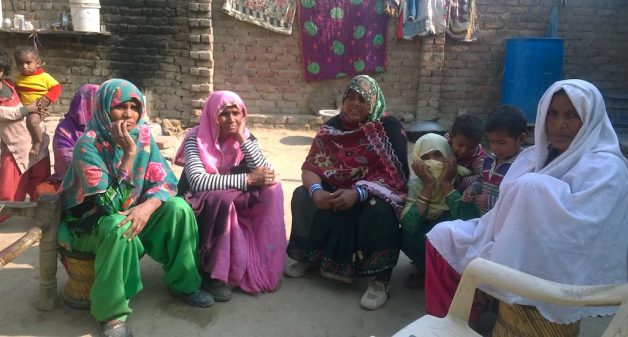 A group of village women in Nuh discusses the merits of digitizing the targeted public distribution system. (Photo by Debika Goswami)

The Haryana government has started to digitize the Targeted Public Distribution System (TPDS) by installing biometric-based Point of Sale (POS) machines in ration shops to ensure transparency and accountability in the implementation of the program. In Nuh district of Haryana, the process began in November 2016, but due to several technological glitches, the District Food & Supplies Controller (DFSC) in middle of December sent a circular to depot holders saying that rations for November and December would be distributed using the earlier system of stock and sale register maintenance.

The DFSC circular that suspended the use of POS machines in Nuh marked a setback in achieving a leak-proof TPDS in Haryana. POS machines were not only introduced for automating Fair Price Shops (FPS), but also to stop the pilferage of subsidized commodities distributed under the program, prevent illegal transactions of subsidized commodities, and ensure that the stock reached its lawful beneficiaries without any hassle. In other words, these machines were introduced to seal the leaky pipes of corruption and usher in transparency and accountability with immediate effect.

Despite efforts of the DFSC in Nuh to train all depot holders in a 3-hour training program on the operational procedures of the device in October and ensure seeding of Aadhaar unique identity numbers in the ration cards much before the functioning of POS machines began, the actual operations of the machines failed.

“One of the major problems in the functioning of the POS machine is that the server and network used remains down most of the time,” Talim Khan, a depot holder of Rithat village of Nagina administrative block in Nuh, told VillageSquare.in. “I am unable to distribute rations to the beneficiaries (through the new process) despite my willingness to do so.”

Besides connectivity issues, biometric verification of beneficiaries also did not match from time to time. In many cases, the Aadhaar numbers were not seeded correctly, leading to non-identification of fingerprints of many beneficiaries. At times, despite getting trained on the operational procedures, depot holders were unable to use the machines correctly.

Nuh is one of the most backward districts of Haryana, with poor literacy rates and low levels of awareness with regard to technical issues. As a result, large numbers of beneficiaries could not understand the problem of server and network failure. Some villagers said that people are more likely to assume dishonesty on the part of TPDS distributors in general because of the corrupt behavior of a few depot holders.

DFSC’s office in Nuh was inundated with complaints of the rural communities with regard to irregular ration distribution in November and December, following which the circular to stall the use of POS machines and resume the use of earlier system of stock-sale registers was disseminated. However, this generated a feeling among the beneficiaries of TPDS, who were mostly oblivious to the technological issues, that their complaints forced DFSC to take action against corrupt depot holders. The entire fiasco created a relationship of mistrust between depot holders and rural communities in Nuh.

One of the major reasons for the amplified feelings of mistrust between rural communities and depot holders is the lack of understanding about the technical glitches in the POS machines. “More detailed information about the technological problems in the functioning of POS machines through radio, television, and newspapers will sensitize and enlighten common people like us,” Hussain, a TPDS beneficiary from Bhuriyaki village in Punhana administrative block, told VillageSquare.in. “This will help us to be patient and adjust with the temporary hiccups during the process of transition of TPDS to a digitized version.”

Also, a pilot in selected villages of Nuh on Fair Price shop automation could have given a good idea to the implementers about the nature of the technical glitches or even the reaction and difficulties experienced by the rural communities during the process of digitization of TPDS.

The DFSC is undeterred. “We have instructed the depot holders to start reusing the POS machines from the middle of January’ 2017,” Chand Singh, Food & Supply Inspector, DFSC Nuh, told VillageSquare.in. “However, in order to ensure that ration distribution does not become irregular due to malfunctioning server, we have also made maintenance of the registers compulsory so that in case the machines fail, at least ration will be distributed following the traditional system.”

Despite such problems, rural communities are gradually realizing the relevance of introduction of digitization in TPDS. Women in Baisi village of Nuh block mention that the proper use of POS machines will help reduce corruption, as electronic records of allocation to the beneficiaries will be maintained.  “We as customers of TPDS will benefit from digitization,” said Afsana, a beneficiary of TPDS In Baisi.

It is important to remember in this context that the new system of TPDS aims to digitize beneficiary database in order to enable correct identification of beneficiaries, detection and cancellation of false cards and improved targeting of food subsidies. In addition, the computerization of supply chain management in TPDS aims to ensure timely availability of food grains to intended beneficiaries at the Fair Price shops as well as constant monitoring of leakages and diversion of the commodities.

Digitization of TPDS is a welcome move in creating smart practices in public service delivery. The DFSC office of Nuh plans to refurbish the process of digitization by mending the technical troubles. As Chand Singh mentions, “With the use of an exclusive server for TPDS implementation, which is scheduled for April 1, 2017, DFSC expects to overcome the technical glitches, thereby making the process transparent and accountable.”

Debika Goswami is a Programme Leader in Governance and Policy Advocacy in S M Sehgal Foundation. She holds a Masters degree in History from Presidency College, University of Calcutta. She has a Master’s degree in Non-Farm Activities and Rural Development in Developing Countries from the University of Rome, La Sapienza. She has seven years of experience in research on rural governance, livelihood and income generation of the rural women.

Debika Goswami is a Programme Leader in Governance and Policy Advocacy in S M Sehgal Foundation. She holds a Masters degree in History from Presidency College, University of Calcutta. She has a Master's degree in Non-Farm Activities and Rural Development in Developing Countries from the University of Rome, La Sapienza. She has seven years of experience in research on rural governance, livelihood and income generation of the rural women.