Living with the clockwork floods of Barak River

Ever since Sikkim was declared fully organic in January 2016, local farmers say it is helping them increase their incomes, although connectivity for rapid transportation of farm produce continues to be a stumbling block 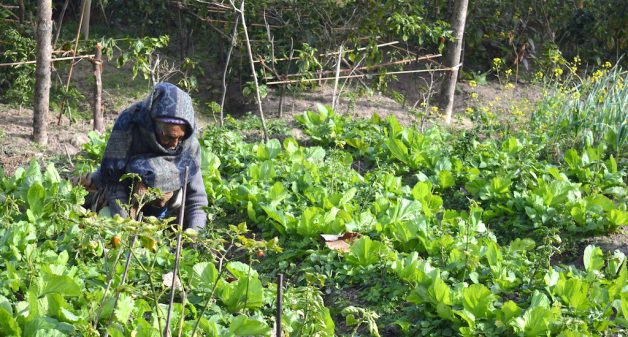 A woman in Sikkim working in her organic vegetable farm. (Photo by Athar Parvaiz)

Overlooked by Kanchenjunga, the world’s third-highest peak, the tiny Himalayan state of Sikkim has achieved many distinctions in recent years including the distinction of becoming the cleanest state in India. But making its agriculture free of chemicals by going organic has earned both attention and praise to this idyllic mountainous state.

Sikkim’s agriculture practices hardly resemble with other parts of the country, where the use of chemical fertilizers and pesticides is the hallmark of farming. This is why Sikkim, in 2003, enacted the policy of transforming itself into a complete organic state and achieved the target of becoming 100% organic after 13 years of sustained efforts in January last year.

While most of the farmers and those selling organic products say that Sikkim still lacks infrastructure like cold storage facilities and easy connectivity to markets in the country where the organic produce of the state could fetch good profits, some have already started benefiting from the region’s organic image.

“I am very happy to say that I am earning more after the organic market was established here,” Mahananda Luitel of east Sikkim’s Tumin Namrang village, who sells his organic products in the organic market of Gangtok, told VillageSquare.in.

According to Luitel, he and his fellow sellers at the organic market most often get 20% more rates for organic products such as tomato, potato, peanuts, etc., while in peak season, when the demand is high, organic products fetch them 40% more. “The organic vegetables fetch us a good amount of profit,” Luite said.

Narayan Sharma, who sells processed organic products like buckwheat, turmeric and honey, says that he is getting a huge response from consumers. “When these products are in short supply, the customers even offer prices three times more than the usual price,” Sharma said.

Twenty-eight-year-old Abhinandan Dhakal, who lives in Gangtok, has made small investments for four consecutive years apart from investing his time and energy for laying the foundations for a “unique organic agricultural product” — ground apple (or Peruvian ground apple) — in Sikkim, which he is all set to launch in the market on a large scale.

To capitalize on Sikkim’s organic tag and to standout from rest of the organic dealers, he said that he decided to focus on ground apple, a high-value product.  “I taught farmers in east Sikkim how to grow ground apple and offered them market security for their products,” Dhakal told VillageSquare.in. 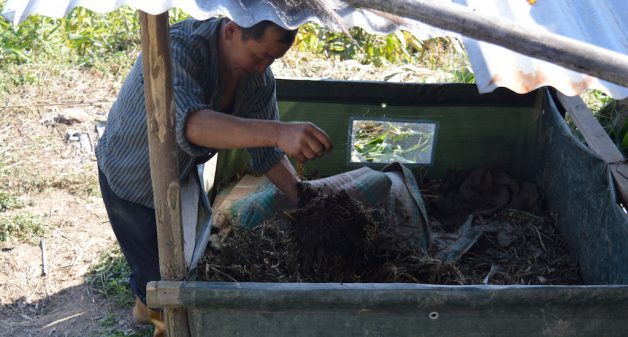 A farmer preparing organic manure for his farm in Dzongu in north Sikkim. (Photo by Athar Parvaiz)

No farmer in Sikkim, he said, had any idea that they can grow ground apple and sell it as an organic product from Sikkim. From the current production of 10 tons, he plans to raise his production up to 200 tons next year, with more farmers collaborating with him for growing ground apple.

“We are very happy about its productivity as 1 kg of seed gives us 40-50 kg of ground apple,” said Dharni Sharma, a 33-year-old farmer of Linkey in east Sikkim, adding that they earn Rs 45 for one kilo of ground apple.

“We have never ever used any chemical fertilizers in our farms,” said Sonam Topgay Lepcha, a farmer in Dzongu, 70 km north of Sikkim’s capital, Gangtok. “When we think of our agriculture, we don’t only think of the produce we get from our farms. We also think about what we give back to our farms to keep the soil healthy. We harvest the crop-yield and give the residue back to our farms. This doesn’t require us to use chemical fertilizers and pesticides.”

Outside most of the houses, structures for making organic compost can be seen loaded with the organic stuff, which ultimately turns into organic manure. “Using organic fertilizers has been our culture. We don’t believe in artificial things,” Pem Dorjee Lepcha, another farmer, told VillageSquare.in.

The farmers said that using organic manure certainly doesn’t help getting great yields, but they added that they prefer low yields over damage caused to the soil by using chemical fertilizers and pesticides. “And organic products also fetch good prices in the market, which fills the gap,” said Passang Lhandup, who produces ginger and Large Cardamom.

“Organic manure might not give you good yields, but it doesn’t damage the soil over a period of time and also helps producing food which is good for human consumption,” said Ringku Thapa, another farmer.  “Due to the greed of getting good harvests, some farmers had resorted to the use chemical fertilizers some years back, but they realised the futility of using chemical fertilizers after the government adopted the policy of becoming fully organic and also banned the chemical fertilizers,” Thapa said.

According to S. Anbalagan, Executive Director of Sikkim Organic Mission (SOM), Sikkim has just over 76,000 hectares of agricultural land and around 66,000 certified organic farmers’ families. “Our state doesn’t have that much land area, which means we have to produce unique things which are of high value,” Anbalagan told VillageSquare.in.

Sikkim government, he said, has already identified a few high-value crops like ginger, large cardamom, buckwheat and turmeric as unique organic products of Sikkim, which have a huge demand.

Renzino Lepcha, Chief Operating Officer of Mevedir, an agriculture company that provides services to Sikkim farmers said that transporting the produce to the markets is one of the major challenges for Sikkim’s farmers. “It is very difficult to deal in fresh produce especially when we are landlocked and have no rail or airport connectivity. The risk factor is quite high in absence of proper facilities like cold storage chain and processing units and packaging material (everything comes from outside the state),” Lepcha said.

According to him, there are other challenges like pests and diseases of certain cash crops like ginger and large cardamom. “There are also issues regarding timely supply of organic pesticides and bio fertilizers and irrigation problems in some areas,” Lepcha said.

Proper facilities, Lepcha said, like easy connectivity to the markets outside Sikkim, cold storage chain, onsite value addition to crops and products and more work towards developing high value low volume products like large cardamom, it will give better livelihood opportunities to youth in Sikkim. He said that tourism is a big money spinner in Sikkim, but value-addition with organic farming will make it more alternative.

Anbalagan said that efforts are on to address most of the issues regarding infrastructure like establishing processing-plants for value addition, creating cold-storage facilities everywhere in the state and getting the region connected to rest of India for speedy transportation of produce to markets.