Living with the clockwork floods of Barak River

The state seems to be indifferent to the plight of the large number of people settled in the Barak Valley in southern Assam, and they are left to fend for themselves when the river routinely floods its banks every monsoon 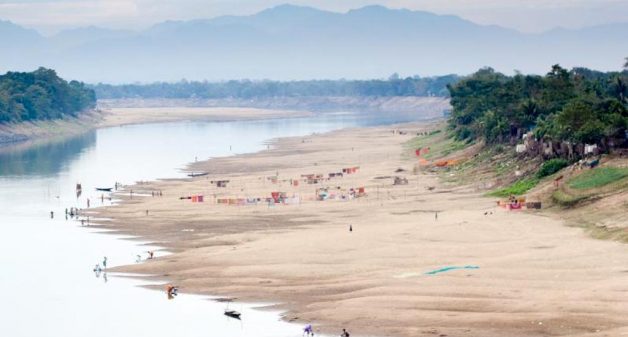 The Barak River routinely floods its banks in the rainy season every year. (Photo by Monica Roy)

Drained and routinely flooded by the Barak River and its tributaries, the districts in South Assam are thickly populated. The area is fringed by hills on three sides and drains into Sylhet and Mymensingh districts of Bangladesh. The hills of Mizoram in the south, Manipur hills in the east and Meghalaya hills in the north, all receive heavy rainfall exceeding 2,000 mm every year and the water gushes down through the numerous tributaries of Barak, making the whole region a mammoth sea of flood waters in every monsoon. The valley is quite narrow, small and absolutely flat, creating numerous howars, a name given to large tracts of wetlands.

Traditionally, Cachar hills and riverine plains were thickly forested where Royal Bengal Tigers once roamed freely and malaria made the region inhabitable. As a result, till about 75 years ago, this region was sparsely populated. Three waves of migration saw the region changing its habitation pattern and demography completely.

The first wave came at the time of Independence and the terrible communal riots, which drove Hindus out of the then East Pakistan. These refugees were settled by allotting lands along the rivers. The second wave occurred between 1965 and 1972. The third wave came around the time Bangladesh became independent and thereafter the in-migration has dominantly been of Bangla-speaking Muslims, who now form a majority in Karimganj and Hailakandi districts.

The districts Cachar, Karimganj and Hailakandi in South Assam rank among the less developed districts in Assam. Assam itself is considered a poorly developed Indian state. A total of 3.7 million people (2011 Census) live in these three districts with a population density above 600 per km. Among the three districts, Hailakandi and Karimganj fare much worse than Cachar because urban areas of Silchar raise the values of Human Development Index.

For some parameters such as per capita income and literacy, Hailakandi and Karimganj rank worse than even the Bodoland areas hitherto considered among the least developed areas of Assam. Large-scale in-migration from the neighboring country, physiographic factors, and poor connectivity are some of the main reasons for this sad state. Locals attribute the poor development to state apathy, which does appear to be more than a mere grievance.

The Bangla-speaking people outnumber the so-called locals drawn from diverse tribes — Cacharis, Mizos and Kok-baroks — drawn from the hills that fringe the valley. A language agitation in the sixties was settled through a compromise solution where these districts have Bangla as their official language. According to local sentiment, this is perhaps the major cause why the region receives a step-motherly treatment from Assam. The state administration appears to regard the region as an outlying, unwanted territory.

The districts connect with Shillong as well as with Assam through the North Cachar hills. A railway line was recently completed and some slow rail transport has now complimented the awful road connectivity of the region. Road conditions are really bad. It took six hours to travel 100 km. Ironically, such is the awful state of the roads here that completely contrary to most other states, one actually avoids travelling on the National Highway if one wants to travel faster! The region is really a period piece; suffice it to say that a majority of vehicles, particularly in Silchar town, were Ambassador cars.

Howars are wetlands closer to the rivers. The rainfall in the three hills may not always occur simultaneously. Often a tributary swells at the same time Barak is already in spate. At such time, the afflux of Barak refuses the waters from the tributaries and these then inundate the nearby riparian areas. Thus the howars are not always only proximate to Barak and the wetlands are located almost everywhere in the districts. In many places, one sees a combination of tea gardens along hillsides fringing the wetlands just a kilometer or two away.

People living in the howars are the worst affected by floods. The situation regarding drinking water is awful, to say the least. People have to perform every activity in long standing floodwaters and the same water is used for drinking. deep red algal blooms on surface of most stagnant pools in January indicate presence of high iron levels in water. Iron contamination of ground water is a perpetual problem of much of this region. Only the very affluent can afford any purification.

Such bad water routinely contaminated with human and animal waste naturally leads to repeated bouts of water-borne infections. When floods rise up to 17-18 feet above the howar floor level, virtually every shelter is fully or partially submerged and people flock to either the nearby market towns or to the roads to live during the worst periods.

The floodwaters routinely ruin sali (kharif) paddy crop. The floods last well unto December and thereafter, funnily enough there is no water for growing the rabi crop. This makes agriculture problematic for the largely rural people. Their survival depends heavily on capture fisheries.

The floodwaters bring with them an abundant stock of seedlings and fingerlings, which grow in the waters. Every household is engaged in fishing. Large quantities of very small fishes are captured. A lucky household can capture as much as 50 kg of fish a day during peak flood periods. This overfishing creates the typical tragedy of commons like situation where no one is able to harvest fish of any reasonable size and weight.

The only other source of livelihoods in the Barak region is remittances received from men who migrate for work to distant places as far as Kerala and Tamil Nadu. Returnees bring with them the scourge of migrating males: sexually transmitted diseases including HIV/AIDS. The incidence of this is said to be substantial in this region.

It is indeed depressing to see the plight of these half a crore people — uprooted from their ancestral places by communal forces and poverty in Bangladesh, unwanted here, occupying lands which nature intended to be devoid of human population, seemingly devoid of any competitive advantage that can help the region grow economically, neglected by the state and witnessing development process pass them by.

I wonder if nothing at all is possible here. I am given to understand that Bangladesh has a National Howar Development Board and, of course, one knows that globally the largest and worst flood affected Mekong delta region is doing fairly well. Do we really hope that there will start a trend of reverse migration from this region back into Bangladesh?