The regular recording to health-related data through computer tablets is helping in designing and implementing food, nutrition and healthcare interventions on the ground in several areas of Pune district 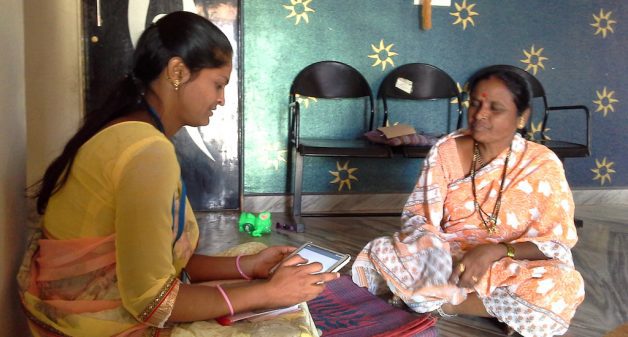 On the face of it, there’s nothing remarkable about Renuka Dhanak and Archana Shiwale. It is when they are seen at work, measuring health parameters and collecting data in rural households that they, and scores of other like them, stand out as professionals who are also agents of change.

Authentic data is a critical policy input. It stands to reason since no action can be taken without the necessary information of what is required. It is a critical input for all fields and healthcare is no different. This is what Renuka and Archana are doing as part of a Health and Demographic Surveillance Systems (HDSS) center at Vadu, a village about 33 km from Pune, in Shirur taluka (administrative block).

Health demographic surveillance means that they record births, deaths, marriages, and inbound and out-bound migration to understand health-related dynamics. These women record whatever happens in the 22 villages that form Shirur and Haveli talukas of Pune district, which have a population of 170,000 people, and the data is updated every six months.

There are currently only three HDSS centers in the country. The All India Institutes of Medical Sciences (AIIMS), Delhi, runs a large HDSS center, the Pune-based King Edward Memorial (KEM) Hospital runs one at Vadu, and the third is a more recent one in Birbhum, West Bengal. Compare this with four HDSS centers in Ghana and five in Bangladesh, which gives us a picture of where we are globally. Accurately collected data, which is also updated regularly, is critical for any intervention, whether it is a food and nutrition or healthcare program. A lack of it means wasted effort and funds.

From project to program

The Vadu Rural Health Programme (VRHP) has evolved from a pediatric intervention by KEM hospital that began in the 1970s, which expanded to a mother-and-child rural hospital and expanded still further to a research center. Today, it is no longer a project (since that has a finite term) but a program, indicating that it is a work- in-progress.

The project evolved into a full-fledged HDSS in 2002 and today it is a vehicle of social change, a calculated spin-off benefit. While healthcare is an important issue, the insistence on the participation of locals, the main beneficiaries of any intervention, has led to changes in the economy. The HDSS teams are now mainly female with a few men per team. These women are not just literate, they are tech-savvy too. Not just at work, where they work on handheld devices (computer tablets) but also in their personal lives, so when they need information, they don’t feel the lack of a library. They just download the literature.

Sanjay Juvekar, officer-in-charge, VRHP, of the KEM Hospital’s Research Centre at Vadu, and a doctorate in anthropology, spelled out the mission. “We aim to provide evidence-based, sustainable and rational healthcare solutions for the rural population using globally relevant community-based ethical research,” he told VillageSquare.in. He has also ensured that all the data is available publicly to anyone who wants it.

Translating this community-based program into practice has been an uphill journey. The HDSS program, which Juvekar began, initially covered 22 villages in Shirur and Haveli talukas of Pune district. It has lately spread to Junnar, Ambegaon and Khed talukas, thus covering nearly half of Pune district for a project to study indoor air pollution, the cause of health issues related to non-tobacco smokers, mainly women.

One such intervention has been data collection on Chronic Obstructive Pulmonary Diseases, where indoor air pollution is the cause. This means that biomass (dung cake, farm waste or firewood burning cook stoves) as a cooking fuel is at the root and this impacts not just women but also the birth weight of babies, already a cause for concern.

Through data collection and collaboration with government schemes and the public sector oil companies, the effort at getting clean fuel in the form of cooking gas cylinders into distant villages is coming through, team member and researcher Rujuta Patil told VillageSquare.in.

Vadu is just off the Pune-Ahmednagar highway and close to the huge industrial belt, which stretches from Pune all the way Ranjangaon, and has a large floating population. Single men coming in search of jobs, some staying on others moving on — all of this is recorded.

Being a community-based program, it is essential to enroll locals in the data-gathering process. According to Juvekar, after visiting the 22 villages under their initial project, they got just two volunteers, both as cleaning staff. Today, 15 years later, the HDSS has a 190-member research team, half of it local residents. Juvekar said their only criterion at enrolment time is that the person is literate and ready to study further.

“In rural areas, once a woman has had children and subsequently undergone a hysterectomy, all by the age of 28, she is of no use to her husband. But if she is working, then it’s a different story,” he pointed out.

Renuka Dhonak, one such volunteer in the HDSS team, said she was a matriculate and held a certificate for an Information Technology course when she was married. Two children later, she enrolled with the HDSS. Now she goes on her scooter from village to village with her tablet, entering data directly into the tab so there is no loss of time or corruption of data due to multiple agencies. Her status in the community has risen, which is a matter of pride for the entire family.

Currently, they are conducting clinical trials on the effect of reduced and alternate dose schedule of the already approved pneumococcal conjugate vaccine. Should this succeed, it will translate into lowered costs, since two doses will have to be administered instead of three leading to overall savings of a huge Rs. 20,000 per dose (including the cost of infrastructure, etc). Pneumonia is considered the third highest cause of child mortality in India.

While that is at the macro level, for the volunteers of the research team the Centre has been a vehicle of change. They are part of the digital world, able to connect with anyone anywhere at any time. Renuka Dhanak summed it up when she said, “I have become bindhaast (fearless)!”