Crop depredation by wildlife is one of the biggest problems facing the livelihood security of many farmers in Darjeeling, with most of them losing up to 40% of their crop every year 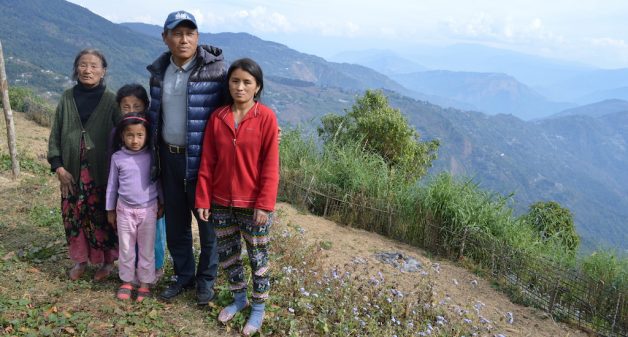 Phincho Tsering Dukpa has decided to sell more than half of his land because of frequent losses. (Photo by Athar Parvaiz)

Phincho Tsering Dukpa, a farmer in Lalung-Senchel village of Darjeeling, has made a firm decision to ensure that at least one of his two daughters becomes a government official one day. For him to aspire so, the reason is quite simple. “If she becomes a top officer, she can do something for the village because she can understand how we have been suffering because of wild animals,” Dukpa said.

Dukpa has gone to almost all the relevant government offices to seek compensation for the crop losses he and his fellow villagers suffer every month because of wild animals. “But to no avail,” Dukpa, who grows vegetables like peas, potatoes, and maize in his farm, told VillageSquare.in.

Villages located near forests in the Darjeeling-Sikkim Himalayas are most vulnerable to crop depredation by wildlife, according to Sarala Khaling, Regional Director of Ashoka Trust for Research in Ecology and Environment (ATREE) for north-east India.

She said that wild boars, rhesus macaques, Assamese macaques, barking deers, Indian crested porcupines, Indian hares and Asiatic black bears are some of the key species that are responsible for crop depredation in the region.

Farmers said that they have been appealing the government to compensate for the losses they suffer since they can’t kill or harm the wild animals and scare them away from their farms because of strict wildlife laws.

“But, every time we go and meet the government officers, we don’t get any satisfactory answer,” farmers in Rampuria and Lalung villages said. Some of them, like Dukpa, have noted these denials with concern.  “Our plight is not going to change unless we have someone from our own community at the helm of affairs. That is why I am so keen to give the best education to my daughter so that she becomes a government officer,” Dukpa said.

Pointing towards his younger daughter, Pemu Wangmoo, who is in her 3rd grade in Darjeeling’s Bethany School, he said she seems to be capable of fulfilling his dream.

Dukpa has seven acres of land, but four out those seven acres suffer huge losses as animals like wild boar frequently raid them. “The wild animals cause huge losses to my farm. Every year, they damage farm produce worth 50 to 70 thousand. This has forced me to think of selling off these four acres of land,” Dukpa said. 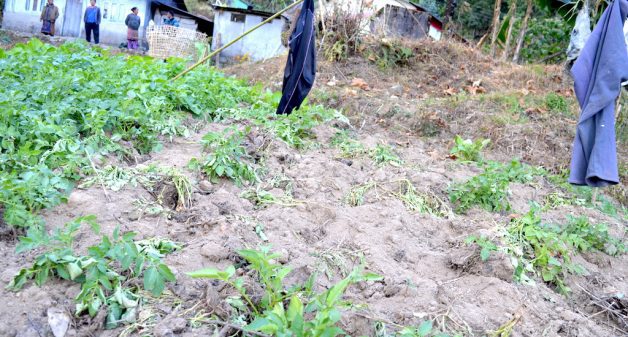 A damaged vegetable plot. Farmers can only erect scarecrows in the fields and beat tin boxes at night, but that do not deter animal attacks. (Photo by Athar Parvaiz)

“Our land is like gold as it produces anything, but the wild animal attacks are quite discouraging,” he said. “I will manage the education of my two daughters with the income from cattle-rearing and the revenue from my other three acres of land which are safe from wild animal raids.”

Durba Singh Chetri, a farmer in Rampuria village said that the only agricultural produce he always remains assured about is a small farm of one-fourth of an acre outside his home. “This small farm always remains under our watch while our other farm which is a bit far, gets attacked by wild animals,” Chetri told VillageSquare.in.

In search of assured income

“The income from our farms is conditional on God’s mercy while the income from labor is assured income,” says Raju Ghalay, a farmer in Khasmal-Senchal village of Darjeeling, while describing the farmers’ concerns about frequent wild animal raids on their crops.

He said that many of the young people in Khasmal village now prefer working as laborers in different cities across the country rather than focusing on their farming. “They believe that whatever they earn as laborers is something they can rely on,” Ghalay said.

According to Ghalay, some 90 people, mostly youth, of his village out of the total population of 500 are now working as laborers in different cities and towns. “They have seen over the past several years how their parents have suffered. So, they find it sensible to work as labourers rather than relying on their farms only,” Ghalay said.

In Rampuria and Lalung villages also, the residents said frequent attacks from wild animals on the farms of the people have forced many to work as laborers. “This has never happened earlier. In the past, all of us would earn from our farms only. Those days the wild animals were not getting down in the villages in search of food,” Robin Rai, a farmer in Lalung, told VillageSquare.in. “Earlier, the forests had enough to offer wild animals as food. But the trees in forests which offered fruits to wild animals were cut by the government as also by people.”

According to Sarala Khaling, a year-long study conducted by ATREE in many Darjeeling villages has found that crop depredation is one of the biggest issues facing the livelihood security of farmers with most of the farmers losing up to 40% of their crops annually. A household, she said, on average reported losses of Rs 955 every month because of wild animal raids.

The losses, Khaling said, are particularly compounded by the fact that land-ownership of farmers in Darjeeling and Sikkim is small and other livelihood opportunities are few. “Agriculture in the mountains involves high inputs in terms of labour due to non-mechanisation of agriculture, small land sizes and absence of agriculture extension services. For a mountain farmer, the inputs that go into agriculture far outweigh the outputs they get in terms of yield and income,” she observed.

“Therefore the stress is high due to crop depredations. In many instances, this has led to migration by entire families due to persistent and severe crop depredation to nearby towns or cities in search of better employment opportunities and better wages.”

According to Khaling, discontentment among local communities is also based on the perception that government is not adequately addressing community concerns about crop raiding. Ram Prasad, Divisional Forest Officer (DFO) of Darjeeling, said that he has raised the issue of compensating the farmers with the state government. “My bosses have responded positively and have committed providing some allocation (for compensating the farmers) in the coming budget,” Prasad told VillageSquare.in. He admitted that the wild animals are causing a lot of damage to farmers as “I have myself seen groups of more than 25 boars moving together in the farms.”

In Sikkim, where a set of rules and guidelines exist for assessment and disbursement of compensation for damage to crop and livestock in the fringe of Protected Areas, most often, says a study, amounts have been distributed without estimating the quantum of damage due to which genuine victims could not get compensated for crop losses.

“Only 4% of the respondents in Pangolakha and Fambong Lho fringe areas (in east Sikkim) had received compensation, while the number was 29% in case of Barsey Rhododendron Sanctuary (in west Sikkim). In case of Samanden Forest Village and the remaining 13 other villages SNP, however, there were no instances of compensation being given ever to any of the affected households. Nor were the villagers aware of if any such complaints would be addressed.” The study says.

In order to mitigate depredation, Khaling said that ATREE has initiated setting up physical barriers to separate the conflict species and resources. “In one of the villages old barbwire-fences have been re-erected and strengthened and natural fencing has been set up by planting shrubs like Asare, Chutro Kesari and Ghurpis,” she said, adding that the work was undertaken entirely by the community members with partial support from ATREE.

“The natural fencing, however, takes at least three years to become fully effective as the plants and shrubs planted will require time to grow. For the survival of the saplings regular monitoring is essential.”

She said a multipronged strategy is needed to deal with this problem. “While compensation, insurances, physical barriers and vigilance can be adopted as short-term measures, for the long-term measures, I think the government needs to think out of the box and look for innovative strategies to really solve the problems,” she said.

Ram Prasad said that the forest department has also started taking interest in finding a solution to this problem. “As of now, there is no documentation. We don’t have all the details so that the experts could give us exact solutions. So, we have now started camera-traps so that we have the camera recorded data with us which can help us in devising a solution,” Prasad told VillageSquare.in.

“We are also starting awareness campaigns wherein we would make the farmers aware about various techniques to be followed for safeguarding their farms. We would also give them certain tips for examining the animal behavior which can help in devising solutions.”