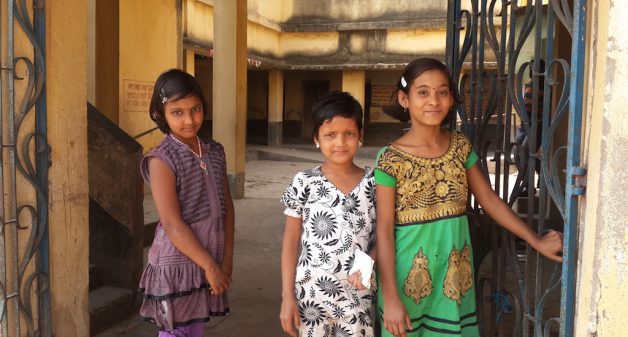 The confident children of Bamuha village in Murshidabad district welcome visitors to their school. (Photo by Chhandosree)

Devising a development strategy is no child’s play. Institutionalizing it on the ground is far difficult. When such a strategy is brought about by children in the age group of 10 to 19 years, it’s worth sitting down and learning.

Mahesail II and Aurangabad I gram panchayats (village councils) are two rare examples under Suti II, a community development block in West Bengal’s Murshidabad district, where children are bringing the waves of change.

The stretch of lush green trees on the two sides of NH 34 throughout the 70 km drive to Mahesail II from Berhampore, the administrative headquarter of Murshidabad district, gives the feel of presence of Bhagirathi flowing nearby. At Mahesail II, the breeze of Bhagirathi is enigmatic that will draw people to the smart, confident children, always ready to help and above all greet with a smile.

Found sitting in a delightfully decorated room with posters and pamphlets on child rights were around 30 more children of age-group 10 to 19, all eager to share their part of the story of development.

“Development is a wonderful word, but everything doesn’t happen as easily as it sounds,” said Ramiz Raza (16), a 12th standard student of Murali Pukur High School and a group leader of children in the age group of 15 to 19.

Bamuha village in Mahasail II comprising population of around 3,600 and around 300 households did not have a different story than any nondescript rural village at least six years back. “In 2010, Vijay Hazra, who was well versed with the government schemes and policies, asked our elder brothers and sisters to form a Village Level Child Protection Committee (VLCPC). He gave handholding support to constitute it. The main purpose of VLCPC was to protect child rights,” said Ramiz.

Ramiz explained that under VLCPC, every village constitutes children groups in the age of 10 to 19 and each group has a leader. The group members select the leader and the major task of the leader is to hold group meetings, hear child-related problems and take up genuine issues with village seniors, that can also be the gram pradhan (village head).

“We had been maintaining committee register since 2010 and have solved so many child rights-related cases,” Vishnu Priya (16), a class 11 student, told VillageSquare.in.

Talking how her own marriage, settled two years ago, was foiled through the children’s group, she said, “I was very scared when a marriage alliance was proposed to my parents from relatives in Malda. While I was a student, the boy was a mason. I wanted to study further but my parents did not agree. I discussed the matter at our group meeting. We consulted Renu Sarkar, a teacher by profession who acts a guide for us. She talked to a few more seniors in the village and all talked to my parents to stop my marriage.” 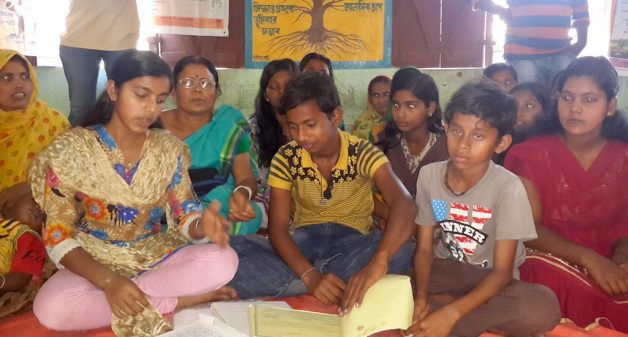 Foiling child marriage is not all. The group also stops untoward practices. “There was a betel shop near a primary school nearby. It used to play television during school hours and any request to stop it was refused. This matter too was discussed at the group meeting. We took the matter to the gram pradhan and he directed the shopkeeper to stop the nuisance,” said Supriya Das (15), another member of the group.

While the group of seniors solves bigger problems, those of the juniors are great informers. “Group of Lili, Lipi, Mili did a great job by letting us know that there was a child at a local mason’s home who was never seen here before. We apprehended that it might be a case of child labor. We asked the kids to befriend the boy. But the mason stopped the boy from meeting other children. Again we had to consult the village seniors to find out if the boy was a laborer. It was then found that the mason had brought the boy for work. Local police helped us to send back the boy to his home in Howrah,” Vishnu Priya said.

Shyamali Roy, Karabi Das, Pobitri Das, villagers of Bamuha, are very proud of the children. These women feel that wave of change was visible due to the children’s activeness. “Can you believe that our villages do not report a single child marriage case, neither a single home delivery? Our area was known to be Bidi bachchader elaka (areas of bidi children) because of huge demand of children in local bidi (a kind of cigarette) factories. But the scenario is changing. Our children go to schools and not to the bidi factories,” said Shyamali Roy, who is also a member of the village’s woman’s group.

Around 15 km away from Bamuha in Mahesail II is Baguipara village under Aurangabad I panchayat. Here the children are not only active but also helping panchayat officials in making a budget for children. Jaidev Das, gram pradhan of Aurangabad I, says, “My heart goes to these children who are emerging as crusaders of change and development.”

Unlike Bamuha that primarily had greater Hindu population, Baguipara is Muslim-dominated and challenges of the young girls for education and stopping their own early marriage is immense. So, the villages in Aurangabad I has not only VLCPC but also Children Panchayat. “Every village has one or two representatives that jointly constitute the junior panchayat. This holds meeting with the senior’s panchayat once a month to discuss the issues that children are facing,” Osman Gani, panchayat secretary, told VillageSquare.in.

While Mahesail children have their own set of problems, the children, mainly girls in Aurangabad, face more of eve teasing and child marriage.

“I was a class five student when I got married. Once I came back home after marriage, I refused to go back and expressed the desire to study further. It was children’s group support that I got talaq. But the clouds were not over. My marriage was again fixed in class eight. This time I sought the help of the panchayat, the police and help of Child in Need Institute, a West Bengal based noted organization working for women and children, to help me out. I am thankful that my marriage was avoided,” said Nazma Khatoon (18), member of the children parliament, a class 11 student, who was awarded by several organizations for her courage.

Sukheda Khatoon pointed out that being a member of the children’s panchayat was helping them in a big way. “Girls of eighth-ninth standard complain of regular eve teasing. We took this matter with senior’s panchayat. Seniors have now not only consulted local police but also deputed trustworthy boys to keep a watch. Girls are now feeling safe,” she said.

How do seniors see the children’s involvement? “Their participation has actually made our functioning better,” said Mohammad Suqir, former gram Pradhan of Aurangabad I. “Earlier we used to spend money only on infrastructure development like road construction, drain construction, repair works of schools and garbage removal. The children helped us to go beyond the specific allocations. They started preparing a budget for children.”

In the financial year 2015-16, the panchayat had a budget of Rs 13.5 million. “Out of the total, we were able to allocate Rs 6.34 lakh only for children and allowed the children parliament to spend it. They distributed the amount judiciously,” informed Osman Gani. He said an intelligent child was no more deprived of getting coaching or attaining higher education. “Through budget for children, we are not only arranging for their education but health too. Child rights are not neglected anymore,” he added.

The claims of the children and women make sense. The recently released National Family Health Survey (NFHS) IV data says child marriage in West Bengal has gone down from 53% to 40%. Even institutional delivery in the state has improved from 75% to 40%. Women’s empowerment and gender-based violence too have shown marked improvement with 90% of married women participating in household decisions, which was earlier 70%.