A smart village rises in Bengal through agricultural entrepreneurship 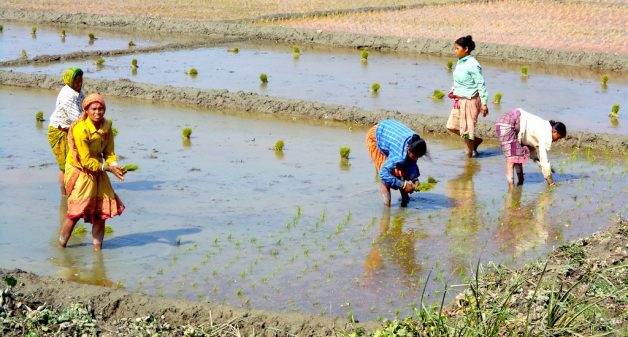 Organic rice is being transplanted in Uttar Dinajpur district of West Bengal. (Photo by Dhruba Dasgupta)

Socially just entrepreneurship where agriculture can be a money earner instead of a losing proposition has been a lifelong dream of Basudeb Sarkar. His dream finally materialized after he set up a Health, Education and Employment (HEE) center at Itahar administrative block in Uttar Dinajpur district of West Bengal with the help of FAIDA (Food and Agriculture Integrated Development Action) and its founders.

The conceptualization of FAIDA came to pass when farm scientist Raghuvansh Mani Pandey and farmer’s son Sukumar Sarkar put their thoughts together and realized that to reverse the current negative thinking regarding the worthlessness of agriculture and consequent farmer suicides, decentralized enterprise held the key.

Not everyone is capable of a lot of capital investment in agriculture, but that should not seal the person’s fate to be doomed. It was essential to have respect for the soil with a resolute will to bring back its fertility through scientific and consistent intervention, they reasoned. A restored soil led the key to a better future. Thus was born the institution FAIDA, run as a trust and having slowly found acceptance of its philosophy in 13 states of India after a decade of hard work.

The acreage covered under FAIDA’s agricultural methods should be close to 5,000 acres, Sukumar Sarkar says. The FAIDA states include West Bengal, Uttar Pradesh, Assam, Andhra Pradesh, Bihar, Chhattisgarh, Delhi, Jharkhand, Maharashtra, Madhya Pradesh, Manipur, Rajasthan and Karnataka. The other countries where this initiative is being practiced are Bangladesh and Nepal.

FAIDA’s agricultural philosophy is to equip farmers with a fertilizer that restores the health of the soil and helps put in place an adulteration-free production practice that improves food quality and ultimately puts an end to the farmer’s dependence on external agricultural inputs to produce his own food. The manure constitutes a combination of rock phosphate, gypsum, pyrite, lime, mustard dressings (khol), neem fruit dressings and vermicompost, blended in a ratio that is decided according to the nature of the soil in that geographical region. This effectively neutralizes the havoc wrought by using DAP (di-ammonium phosphate) in the soil. Using this manure will lower the farmer’s production costs and increase his yield, and this practice should consistently be replicated.

To encourage the partial sourcing of manure from cows, FAIDA started the Nandalal Gaushala Project. Under this project, cows would provide both milk products and contribute to the making of manure for chemical pesticide-free agriculture and be used in a variety of other profitable uses. A village producer society would work with up to 25 milch cows, and not more than that. The profit accruing from the ownership of the cow would be divided in a 50:50 ratio between the owner and the producer.

Along with adulteration-free farm produce, the two other aspects that will enhance better rural living are Nivedita Rural Health Scheme and Sri Ramakrishna Education Scheme. To ensure the success of adulteration free produce, a further entrepreneurial element is needed which comes in the form of Maa Sarada Food Production and Distribution Project or Scheme to promote poison-free agriculture and agro-based activities in rural India. 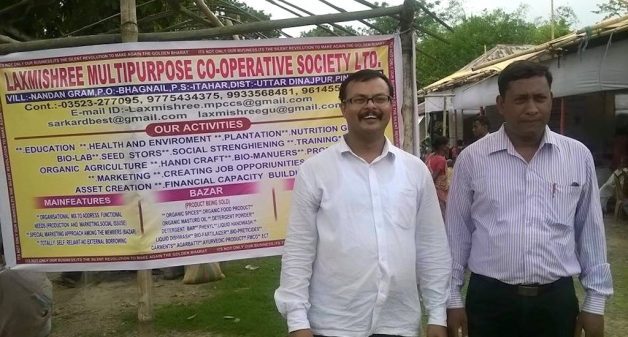 As a counterpoint to the concept of Smart City, FAIDA speaks of the Smart Village where gainful employment, education, and health are together taken care of by creation of HEE centers. These centers are run by village residents who have links with the city and a reasonable degree of organizing capability, as well as some land where they can practice adulteration-free agriculture. This means that they do not use synthetic fertilizers and pesticides. FAIDA supplies farmers with both these products from its company Sanjeevani Biotech and market their products at a premium price, which consumers pay for since they consume better quality food.

Basudeb of Nandangram village in Itahar has some 15 acres of land where adulteration-free premium quality rice is grown. He also coordinates with a network of producers who produce a basket of products such as a special rice called Tulai Panji, which is native to Itahar, two types of lentils, tej patta, mustard oil and jiggery, which is famous in Bengal called khejuri gur. These products are sold to the consumer group, which consists of higher-income people based in cities and towns who source their food products from the producer group. The producer group also sources its own requirements from within the group.

Basudeb, through his earlier efforts, had succeeded in getting together a low-cost coaching center and is working on a medical center where simple diseases are treated through telemedicine and low-cost medicine. Also, under the Nandalal Gaushala project, two young village boys have been trained by a Nagpur-based institute to make a variety of products from cow-dung and urine. This cottage industry will have to fructify as a part of Basudeb’s initiative, he told VillageSquare.in. For that, some more time is needed.

How did he manage to find the capital? After all, this business takes some time to turn around and sale proceeds from the produce will go to the producers so they cannot be used to finance the development of the HEE center. “In the beginning, cross-subsidization is essential,” says Basudeb. “My veterinary food supplement business and medicine business has put me in a position to be able to bear these costs. However, once the initial phase of support is given, the HEE centers will come of age.”

Branding is an issue. For the FAIDA initiative, decentralization is the key word, and FAIDA encourages branding of the products in the name of the producers’ mother/ or father. Earlier, all products coming from Basudeb’s producer society’s stable were sold under the brand Laxmisree Griha Udyog. However, today he has applied for permission to run Laxmishree Multipurpose Co-operative Society Ltd, an umbrella under which his initiative will stand up as a successful decentralized agricultural entrepreneurship model.

Basudeb says he uses his expanding shoe-making business to cross-subsidize his efforts to grow a Smart HEE center. At present, his producer group produces premium quality adulteration–free rice, and his agricultural transactions are expanding. His USP in developing the HEE center is his decade-long experience as a marketing manager in Raipur, Chhattisgarh. His emphasis is to specifically employ socially disadvantaged women and tribal women to provide the main strength to his agricultural entrepreneurship initiative. “I came back to my village because I wanted to do something positive here. So far, my efforts have been fruitful,” he told VillageSquare.in.

FIADA’s programs have been expanding since its founding in the year 2000.In 2015, it conceptualized the Smart Village initiative. The most practicable method of establishing more HEE centers, according to FAIDA, is to connect this initiative to the nearly 2.2 million NGOs working in the country where each NGO can adopt a village and build a HEE center. There are also plans to have a HEE centre on wheels where medical facilities will be extended to all those who approach the center on wheels. It will be accompanied by a doctor and will move about during a particular time of day to those who wish to avail of the services.

Sukumar Sarkar is aware of the ups and downs associated with this type of agricultural enterprise initiative. “The success and applicability of this initiative depend on the entrepreneurial orientation and the local issues,” he told VillageSquare.in. “FAIDA’s biggest strength is its willingness to empower the farmers with the tools that will encourage decentralized, local level self-sufficiency. We do not hold back technology and positive advice, and wish that the less fortunate are able to survive with as much dignity as those who are well-off. India’s villages cannot just function with a one-size-fits-all approach. That is why we have started our initiative and, if one is able to make ample use of it, success will surely be tasted.”

Dhruba Dasgupta is a Kolkata-based writer.