The practice of underage marriage is acute in the tribal-dominated southern and southwestern parts of Odisha, but interventions on the ground are planting the seeds of change among adolescent girls and their parents 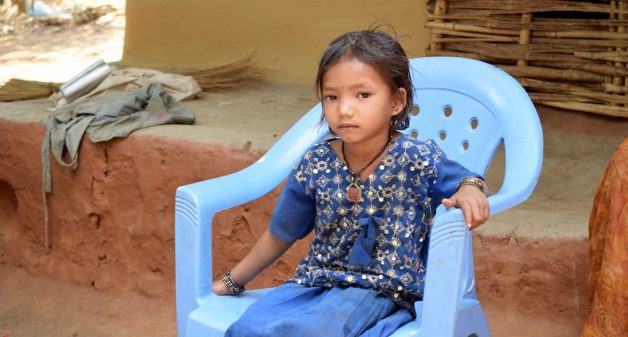 The pensive look of Devati Durua asks many questions. (Photo by Basudev Mahapatra)

The pensive look on the face of three-year-old Devati Durua of Chanchraguda village in Koraput district could very well change to distress if she is married before she comes of age at 18. That remains a distinct possibility in the underdeveloped area where indigenous people are known to widely practice child marriage.

Although India has laws to prevent child marriage, it remains prevalent in many parts of the country. The country is said to lose $56 billion (Rs 3.6 trillion) a year as a result of adolescent pregnancy, high secondary school dropout rate and joblessness among young women, according to the State of World Population 2016 of the United Nations Population Fund. As per the Indian laws, marriages of girls before the age of 18 and boys before the age of 21 are considered child marriages.

The situation is particularly alarming in the eastern state of Odisha. As much as 21.3 percent women between the age of 20 and 24 years married before the age of 18 and 11 percent of men between the age of 25 and 29 married before attaining the age of 21, according to the National Family Health Survey 2015-16 (NFHS-4) report. Unsurprisingly, the number of child marriages is more in rural Odisha. However, “there is significant variation amongst districts,” Amrita Patel, State Project Coordinator of Odisha State Resource Centre for Women, told VillageSquare.in.

The prevalence of the practice is wider in the tribal populated backward districts of the state. “Over 50 percent of marriages in the tribal communities are underage or child marriages,” said Gopi Durua, 25, of Devati’s family who too had married before the age of 21.

“This is a pan-Odisha issue although the practice is further acute in the tribal-dominated southern and a few southwestern districts of the state,” Ghasiram Panda, communication in-charge at ActionAid, Odisha, and an advisor to Odisha Child Right Commission, told VillageSquare.in.

An adult girl child being considered a burden on the family in most tribal and backward communities, lack of awareness and a host of socio-economic problems including abject poverty and a poor female literacy rate are often blamed for such wide prevalence.

“The tribal communities also believe that early marriage is their tradition. When you ask them to stop the tradition, they think you are trying to mobilize them against their traditional practices,” said Bhanumati Santa of Gamkapadar village in Koraput district.

“As cases where boys and girls falling in love and opting to marry in elopement have been increasing, most of the parents also see a kind of social risk in allowing their daughters to continue studies instead of getting married at a tender age. They believe that marrying the girls at an early age is the safest way to escape such risks that would otherwise demean the social status of the parents and the family,” said Sanmati Durua, 60, of Chanchraguda village. 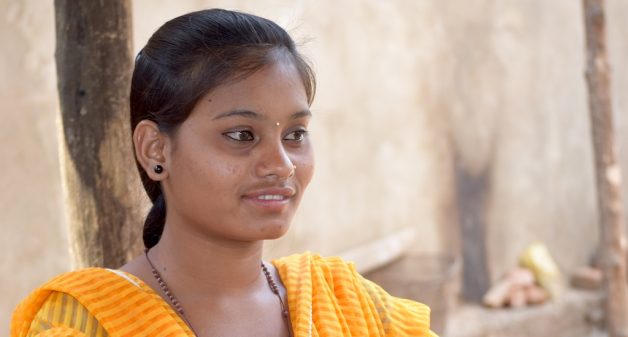 Daimati Santa has set an example in Gamkapadar village by raising her voice against child marriage. (Photo by Basudev Mahapatra)

Basanti Jani, 16, of Janiguda village in Koraput district, however, sees greater possibilities with continuous awareness programs. “Our parents must be made aware of the possible impacts of early marriage on the health of their daughter and the future of her family. They must be explained how they are putting the lives of their daughters at risk by marrying them at an early age,” she told VillageSquare.in.

Talking about the social fallout of child marriage, Panda stated that “such a practice not only affects the health, education and status of victim women in the society but it also endangers the future generation in many ways while affecting their physical and mental health.”

“Unless child marriage is stopped, it would be difficult to achieve the goal of controlling infant and maternal mortalities in the state,” he added.

In order to stop child marriage, recent initiatives by Odisha’s Women and Child Development department include facilitation of interdepartmental convergence on the issue of child marriage. The government also has plans to conduct training programs for Child Marriage Prohibition Officers, gender sensitization of college and University students across the state and orientation of high school students in 12 tribal districts, according to Patel.

Interventions from the government as well as non-government agencies to stop the practice have brought in some changes.

Sensitized by Adivasi Ekta Sangathan or Ekta, a Koraput-based non-profit, on the ill impacts of child marriage and the importance of education for a girl, Daimati Santa of Gamkapadar village has dared to stand against the proposal of her marriage when she is only 16-year-old.

Daimati has been successful in convincing her parents and the groom’s family to defer the marriage til she turns an adult and, also, to allow her to continue with the higher secondary studies.

Though sporadic, such cases of girls opposing early marriage and expressing their desire to continue with education are being seen in different places of Koraput and other tribal populated districts of Odisha.

Some regions like the Gumma block in Gajapati districts have even made them free from child marriages where the practice was rampant a few years back.

After intervention by the United Nations Population Fund, “child marriage has almost stopped. Dropout students go to school again and girls from this tribal populated block are now working outside and make an earning,” said Mariyam Raita, a local woman leader.

“The change has been possible due to the engagement of the community and all other stakeholders in the process of change. Adolescent girls participating and taking the lead to bring in the change in their lives remained the key to the success achieved,” said Sanjukta Tripathy of the Berhampur-based non-profit People’s Rural Education Movement (PREM) who works as the project manager of the UNFPA supported intervention.

“The changes that have come in the tribal dominated regions raise hope about addressing the problem. The tribal communities have started realising the bad effects of early marriage and are now discussing the issue,” said Ghasiram Panda.

In order to stop the practice, “more community awareness, building on girls’ education and capacity building of the families are necessary. But, alongside, use of the law and awareness about the law is also needed,” said Amrita Patel.

Insisting that the Prohibition of Child Marriage Act of 2006 should be made more stringent and enforceable, Patel highlighted that “in today’s world skill building and making the girls economically independent will go a long way in curbing the problem of child marriage.”