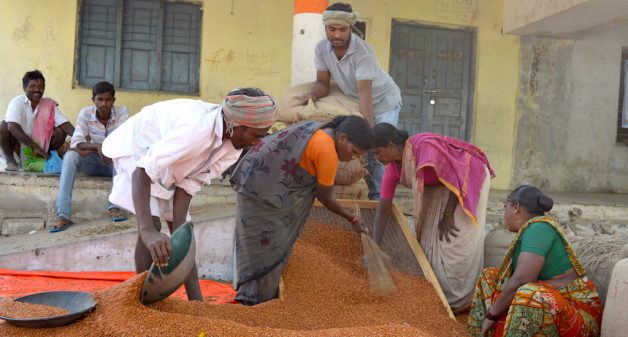 Getting a good price for tur has become difficult for subsistence farmers. (Photo by ALC India)

Husnabad and Kodangal are just 110 km from the cyber city of Hyderabad. In the last week of March, it was a beginning of a long dry spell, with temperatures hovering around the 40-degree Celsius mark. The Kharif season of 2016 had ended. The villages wore a lazy look. Given the perennial water scarcity in the region, most of the fields were dry. Nothing could be cultivated after the autumn harvest except for a few patches where summer paddy was visible, thanks to some irrigation from private bore wells.

It was time for the board of directors (all women farmers) in the Husnabad Farmer Producer Company (HFPC) to take stock of the operations in a firm they had been members of since 2011. The mood was subdued because the government had closed down procurement centers of tur dal (arhar or red gram) by March 15. The procurement under the Minimum Support Price (MSP) mechanism was operational for over a month and a half.

While most farmers had sold their produce and collected payments, there was uncertainty among the women who were meeting. For them, the moot question was whether to cultivate tur in the Kharif season of 2017 that starts in May.

For hundreds of small and marginal farmers with about an acre of land in the central Indian dry land in Maharashtra, Telangana, Karnataka and Andhra Pradesh with no access to critical irrigation, the monsoon and the quality of the land determines what to cultivate, or rather, what cannot be cultivated. Husnabad is the tur belt of Telangana with a big market at Tandur known for a significant turnover, all grown by small and marginal farmers whose land cannot be used except for tur and cotton.

At this point, it important to understand the global context of tur production, market surpluses and how it impacts small farmers in Telangana and, for that matter, all parts of the country.

The HFPC is owned by about 800 women farmers living in 10 contiguous villages. In end-December 2015, it had procured the produce of its members at around Rs 8,000 a quintal (100 kg) with a hope that tur prices will rise further and they will be able to offload the stocks between June and August 2016 and earn a surplus for its members. They were hoping that it would be a repeat of the July 2015 season when retail prices of tur had soared up to Rs 180-200 a kg. Their calculations went horribly wrong and prices did not rise. 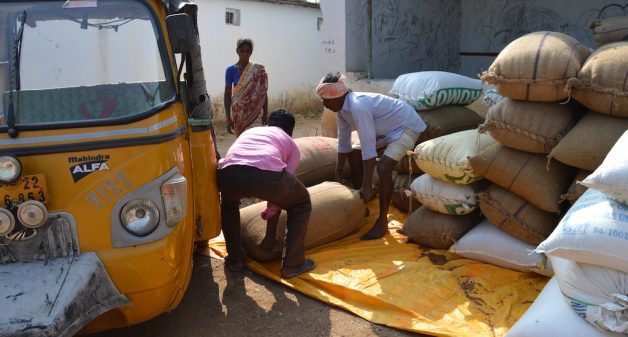 Taking the produce to the market. (Photo by ALC India)

On June 1, the government announced that it would buy tur at Rs 5050 per quintal (100 kg). Although the announcement made headlines, the ground reality was quite the opposite in Husnabad. Between the announcement and opening of procurement centers in villages to the actual act of procuring tur and paying farmers, the implementation was full of hurdles, lacked systematic planning. The intervention needed a detailed exercise in planning and execution of the logistics. It failed on both the counts. For farmers, added to the logistics nightmare was the trauma caused by the demonetization measures announced in early November 2016.

Imagine a women farmer who has harvested Rs 70,000 worth of tur at the end of November 2016 and waiting for the procurement to begin for another one month. Compounding her woes, she had to wait for payment for another three weeks. To complicate matters, the banks decided to transfer the money to farmer members only to electronic transfers. To cite data obtained from HFPC, the women who sold their produce on January 4 got payment in the HFPC account on January 25 and had to wait another full week for the bank to execute the transfer in their individual savings account. Remember, this is for the harvest made in end November and early December. Needless to say, this adversely impacted the cash flow for most smallholder farmers.

The moot question is why did the farmers not go to a private trader or the wholesale market in Tandur and preferred to wait for the government to buy their produce? It was simply because the prices were much lower they had no other option but to wait for the government to come to their rescue, which it did tardily. Thanks to the untiring efforts of some NGOs, at least in some areas, the procurement started, while in states like Maharashtra, it became almost a chaotic scene.

The situation on the ground in Maharashtra is grim. The state government procured a record 400,000 tons of tur but unilaterally decided to close down all procurement centers by March 15, whereas thousands of tons of tur harvested after the season is still lying open in the market yard premises all over the state. Private traders have reportedly offered prices as low as Rs 4,000 a ton to desperate farmers. The government, buckling under the pressure of farmers’ groups, has decided to extend its buying operations till April 22. It was reported that private traders who bought tur after March 15 from farmers desperate for ready cash flocked to the procurement centers.

With the onset of monsoon in June and July, farmers will start sowing in this region. But sowing what? Do they sow tur? The only alternative is cotton, as the dry land does not allow any other permutation or combination. So what will be the outlook for tur and cotton next year? It is anybody’s guess. Since the government has created a buffer stock through its purchase mechanism this year, will it continue the operation in November 2017? Will the open market rate be higher than Rs 5050 or will the price remain depressed?

If the farmers decide to switch to cotton as that seems to be the mood of the women whom I met, will lower acreage of tur lead to price appreciation, thereby giving handsome returns to farmers who have continued with it? What will be the outlook for cotton in end 2017? Who will advise farmers in June and July what to cultivate at the beginning of the Kharif season?

Unfortunately, policymakers have no clear answer to this set of complex questions. Like farmers, the mood swings of the policy makers depend on the retail tur prices. Fortunately, the meteorology department has made a forecast of a normal monsoon.

As the women farmers await the arrival of monsoon, the future looks quite uncertain. The country is still insufficient as far as availability of tur is concerned. India continues to import tur. The buffer stock created by the government this year will not be adequate if there were low production at the end of 2017. The quality of tur procured and stored in the government-owned warehouses is always suspect.

Farmers continue to remain dependent on the vagaries of the monsoon and seed companies. To add to that, the Minimum Support Price of the government and the prices prevailing in the open market make them more vulnerable. There is no assurance of availability of seeds on time and of assured quality. The scenario on the cotton front is repeat so the only feasible option for many families, if not this year but in the years to come, is to travel to Hyderabad to offer their labor at construction sites and abandon the fields that were once the lentil bowl of Telangana.

The observers of the space quietly watch the promise of the National Dairy Development Board leadership, made a few months ago, announcing the AMUL type revolution in pulses that has yet to see the light of the day. In the meanwhile, the dilemma to cultivate tur or not continues for hundreds of farmers in Telangana and many regions of Central Indian dry lands.