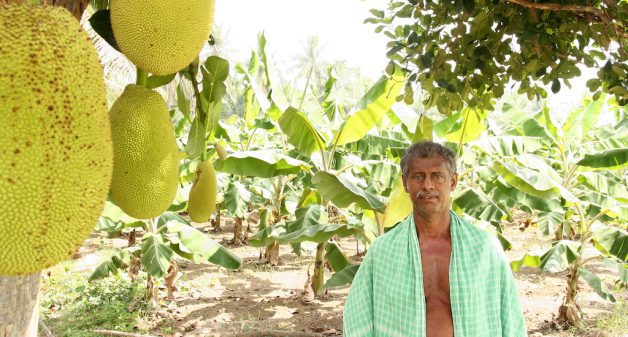 Farmer Jesuraj of Pudukottai in his farm where he practises agroforestry. (Photo by R. Samuel)

“We have found our treasure in trees,” declares Ramanathan, a 70-year-old farmer of Pudukottai district in Tamil Nadu. Farmers in his locality have found prosperity in agroforestry, the practice of growing trees and crops in farmlands, instead of just cultivating crops. Agreeing with Ramanathan, Jesuraj shows his rice field juxtaposed against a grove of coconut, banana and jackfruit trees.

Pudukottai is considered a dry area. In spite of being close to the Cauvery delta, and in spite of Pudukottai’s Aranthangi taluk falling under the Cauvery delta, the district does not receive water from the river. Even as the delta farmers are financially distressed, reeling under a severe drought, the farmers in the southern taluks of Pudukottai district have not been affected. The farmers attribute their success to agroforestry, though they rely solely on deep borewells for irrigation.

From open wells to bore wells

Kaspar, a 42-year-old farmer of Kottai Kadu in Karamabakudi taluk, recalls his grandfather’s stories. “Water was available sometimes even at 10 feet depth, according to my grandfather. So they just dug up small ponds. When my father took up farming, he dug a 90 feet deep keni (an open well),” Kaspar told VillageSquare.in.

Arokiasamy of Vanakkan Kadu village has started farming his ancestral lands after retiring from the state’s agriculture department. According to him, in the 1960s, water was available at 30 feet depth. Oxen were used to lift the water from open wells and irrigate the fields. Agricultural income, their sole earning, was limited. Senior citizen Chinnappa of Pullan Viduthi village in Thiruvarankulam taluk points out that the earlier generation of farmers such as his father and grandfather practised more of subsistence farming.

Elderly farmers say that those were the mummaari days, when they had three rainy seasons in a year. The period that the monsoons became irregular was also the time bore wells were introduced. Many farmers recall that bore wells were first sunk in their region in 1972.

Ramanathan recalls the initial days of euphoria. Suddenly there seemed to be plenty of water. Combined with the green revolution practices of using chemical fertilizers and pesticides, farmers enjoyed good farm income for the first time. However, their success was short-lived. After a decade, their expenditure on the farm inputs increased. Beyond a point, the yield not only did not increase but started decreasing.

Most of the farmers grew two crops. “My father grew pulses and paddy. He didn’t make any profit. He suffered a lot financially in the mid-80s,” recalls Kaspar. Ramanathan adds that those with more acreage grew more number of crops such as groundnut, pigeon pea, and black gram. Yet, it was limited to two cropping seasons and the farmers found it hard to make a living out of farming. 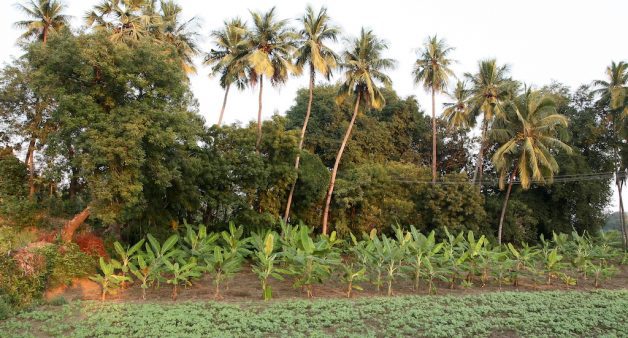 Sampath, from Keeramanagalam in Aranthangi taluk, is a graduate in agriculture science. He says that their ancestors had grown trees, but the later generation switched to mono-cropping. “We did have fruit trees in our farms earlier, but they were just a handful and only for personal use,” Chinnappa told VillageSquare.in.

The present shift to agroforestry seems to have happened by chance. Ramanathan recalls an incident that led to the farmers slowly shifting from cultivating crops alone to agroforestry. It was Thangasamy, popularly known as Maram Thangasamy (maram means tree in Tamil), of Senthankudi village who showed the way. “We were part of a farmers’ federation. Once Thangasamy dug a 100 feet well. But there was no water. He had already planted chillies in three acres. Unable to bear the plants wilting, he left the village. But after he came back, he started planting trees,” recalls Ramanathan.

Thangasamy was ridiculed by the villagers for using cropland for planting trees. “I too questioned his decision. He then told me that I’d be following his footsteps in five years,” Ramanathan told VillageSquare.in. Thangasamy’s words came true. Ramanathan was one of the first converts to agroforestry, followed by many villagers.

An unplanned agroforestry system does not work. The trick is to have a tiered tree planting plan, according to Ramanathan, that is, plant a mix of saplings that will bear fruit in five years, 10 years and so on. “Teak can be used after 10 years, mahogany after 15 years. Include fruit trees such as mango, guava, gooseberry and pomegranate that will give an annual yield. And also follow inter-cropping and multi-cropping,” he points out.

“When you plant, you leave a gap of 6 feet between tree saplings. For the next three years, before the saplings grow to full height, you can do inter-crop in the gap between the saplings. You can grow groundnut, sesame, pulses or vegetables like tomato and okra in the gap. You will be able to harvest a minimum of five inter-crops in three years,” Ramanathan told VillageSquare.in. After the trees reach full height, shade-loving crops such as pepper are grown.

This systematic approach has worked well for the farmers. Parimalam, a diploma holder in electronic engineering, quit his job and got back to farming. He earns Rs 5 to Rs 6 lakh per year, way more than what his job paid. “I have eight acres. In one portion, I have red sanders, mahogany and teak trees. In another plot, I grow cashew, mango and banana, which give yearly income. In the rest of the area, I grow maize, black gram and the like, that are harvested after three or four months, depending on the crop,” he adds.

Kaspar grows lemon, coconut and jackfruit, besides rice and vegetables. Sampath who grows coconut, neem and jackfruit in four acres says that jackfruit never fails to give good returns. “I have 200 jackfruit trees. Even if I lease it out for the minimum of Rs 1000 per tree, I get Rs 2 lakh,” he adds. In addition to the trees, he grows sugarcane in three acres, maize and paddy in two acres each. As the soil in this region is suited for all types of crops, farmers grow a range of crops.

Chinnappa grows black gram, chilly, groundnut and vegetables, not only as inter-crops but also as stand-alone crops. Even small farmers who own three or four acres, divide the lands and grow trees and multiple crops. “Practising multi-crop system means we harvest a different crop at a different time. So we get a steady income throughout the year. Also, even if one crop fails, the next one will help us,” says Kannan, son of Maram Thangasamy. A group of farmers, including Kannan, grows flowers such as jasmine, roses and sweet lilies that bring them daily income too.

Trees in time of need

In times of necessity, the farmers fell a tree and sell the timber or use it for themselves. “When I built a house, I found out that a single door frame cost Rs 50,000. I cut one jackfruit tree and made all the doors and windows with the wood,” says Sampath.

Though the farmers feel concerned about the depleting ground water, they remain hopeful that the monsoons would improve the situation, as has happened in the past. They practice crop rotation, choosing crops to ensure optimal use of water and also to ensure the reclamation of soil fertility. “Maize will suck all the nutrients. So we grow black gram and groundnut after we harvest maize. When we harvest the pulses, we leave the roots behind as they help in nitrogen fixation,” Sampath explained to VillageSquare.in.

Some farmers like Kannan grow rice and vegetables for their consumption alone. Either way, the farmers are assured of food security. The farmers are unable to quantify the difference agroforestry has made in monetary terms. But they show their new houses, personal and farm vehicles and their ability to send their wards to professional courses, as proof of their prosperity.

“Trees are not only farmers’ assets, but the country’s too,” declares Ramanathan, reciting a poem he has written about the benefits of growing trees. Concurring this, Rajesh, a farmer in his 20s says that this multi-crop agroforestry system has helped the farmers of this region move from subsistence farming to food security, and to financial security now.