Women trained in the use of the Internet are fanning across four districts of Assam to bring its benefits to rural women, which in turn is boosting their household earnings and changing everyday lives for the better 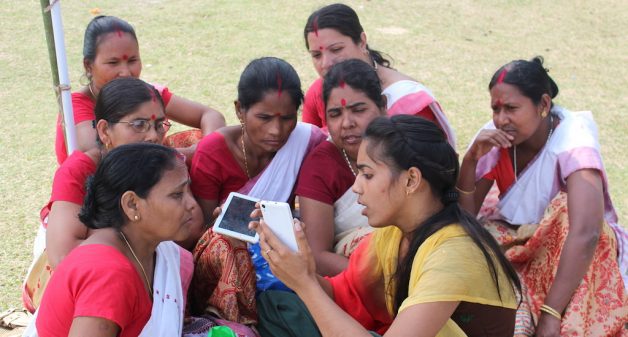 Internet Saathis are spreading the benefits of the World Wide Web in rural Assam. (Photo by Abdul Gani)

Nizara Talukdar in her mid 30s is just another village woman in Assam who has grown up in poverty. But the times seem to have changed as she has started to earn more through her innovative ideas, thanks to the Internet Saathi (Internet Assist) program being implemented in various areas of Assam. The Internet Saathis are educated village women who are provided training and given smartphones and a bicycle to carry out their activities.

Talukdar is a weaver in a village in Assam’s Baksa district under Bodoland Territorial Area Districts (BTAD). Over the years, she has been following the same old designs that she inherited from her mother and other elders. But she failed to draw the attention of customers. Now she can download creative designs from Internet, which has enhanced her sales, as well with the guidance from the Internet Saathis.

“The sales has gone up and also the buyers have appreciated my work. I have some old customers who promised to buy more products. Initially we had some trouble, but now we can use new designs from the Internet,” Talukdar told VillageSquare.in. “I raised the price by Rs 400 for a piece of traditional garment, which is used by womenfolk, with my new designs.” Now she sells one chador mekhela (traditional women’s attire) at Rs 1,200 apiece. She has increased her income by 30% to 40%.

Not just Talukdar, there are many women in Assam’s rural areas whose life has been changed with the influence of the Internet. Another woman, Bhairabi Devi, is equally elated to have earned the benefits. “It’s been very helpful. I never knew that I could see designs from across the globe on my palm. I can now do fusions of design. I’m also learning designs of different garments,” Devi to VillageSquare.in.

“It was quite difficult to start with as most of the women are from very poor family and illiterate. So, they did not have any idea about the smart phones or Internet. Initially, they used to shy away from us when we approached them,” Pranita Das, one of the Internet Saathis operating in Baksa district, told VillageSquare.in.

Das has already taught the usage of Internet to more than 12 women in villages. “I used to chase them literally. I always use to carry my devices with me so that at any place I can teach them starting from grocery shops to courtyards,” Pranita, a graduate, added.

They have been able to attract the young girls of the village. Madhusmita Das, a class X student of Lakhipur village, has painted new designs after being taught by an Internet Saathi. “Madhusmita is a very young girl but she is very enthusiastic and has learnt so many things from the Internet. She has already designed and showed them to me,” Pranita said.

Pranjal Chakraborty, vice-president of GVM who is leading the digital literacy project, said that their aim is to train at least 90% rural women. “It is to increase the level of awareness about the Internet among the rural women and to build the leadership capacity of the women and empowered them to access and avail entitlement rights. We also want to empower the women to access the information from market, selling and buying product and thereby enhanced their level of income,” Chakraborty told VillageSquare.in.

“These women have learnt many things on agriculture produces. They again have taught their husbands on variety of seeds and medicines. And now they take so much interest and call me whenever they are in need of my service,” Sarma, who is studying in Gauhati University, told VillageSquare.in.

The village women and girls have even mastered the art of bridal makeup designs through the Internet with the help of the Internet Saathis. “Earlier, the girls in the village used to go to the nearby towns for bridal makeups or they used to hire outsiders but now at least six to seven girls in my area have learnt the make-ups and designs for bridal costumes,” said Archana Deka, another Internet Sathi in Hajo block in Kamrup district.

Chakraborty said that the village women have also learnt to use Paytm and other modes of digital transactions.