The consistently high returns from growing pomegranates in Maharashtra, the epicenter of the fruit’s production in India, have seen many farmers adopt it over water-guzzling crops such as sugarcane and cotton Vishwajit Akre of Ranwadi village at his pomegranate farm near Wardha. (Photo by Hiren Kumar Bose)

From the outside, the fruit does not look particularly appealing. Its shape, an odd combination of a sphere and a hexagon with a prominent calyx on one end makes it one fruit that can’t be judged by the color of its leathery skin. Cracking it open is a daunting task but once done, it reveals a dense compilation of seeds nestled among a whitish, spongy pulp.

As you take a mouthful of the red arils, it offers a burst of sweetish-tart, crimson-coloured juice, followed by the crunchiness of the tiny seed embedded in each aril. Once you’ve savored a pomegranate (Punica granatum L.), the only fruit available throughout the year, you’re unlikely to go for its packaged avatar.

India grows six different commercial varieties of the fruit — Ganesh, Mridula, Arakta, Ruby, Phule Bhagwa and Phule Bhagwa Super. Being home to the finest varieties of pomegranate, the fruits have soft seeds with fewer acids. In fact, the fruit quality is much superior to those grown in Spain and Iran in edible quality and attractiveness.

Mainly grown in the western parts of Maharashtra and northwestern Karnataka, followed by Gujarat, Andhra Pradesh and Tamil Nadu, scores of villages in the districts of Solapur, Nasik, Sangli, Ahmednagar, Pune and Satara makes Maharashtra the country’s pomegranate bowl with 71.21% of the total cultivated area under pomegranate in the country.

The credit for developing an indigenous variety of pomegranate goes to G.S. Cheema, considered the father of Indian horticulture, who at Pune’s Ganeshkhind Fruit Experiment station worked with a local, wild type pomegranate variety known as Alandi, and released GBG-1 variety in 1936 for commercial cultivation in Maharashtra. In 1970, GBG-1 was renamed as Ganesh. In 1984, MPKV (Mahatma Phule Krishi Vidyapeeth) Rahuri released G-137, an important commercial variety. The quest for new varieties of pomegranate, particularly with soft seed and bright attractive color of rind and arils was on with Tamil Nadu Agriculture University and University of Agriculture Sciences, Bengaluru releasing their varieties too. With the introduction of a Russian variety, namely Gul-e-Shah, Gul-e-Shah Red, Gul-e-Shah Rose Pink and Shirin, which possesses attractive color attributes, new crosses were made with Ganesh at MPKV in 1987.

Reaching prospective growers through farmer rallies and visiting orchards in the summer months, when temperature peaks to 45 degrees in Maharashtra, he has single-handedly popularized the cultivation of pomegranate in the state’s rain-fed regions bringing prosperity among those dependent on horticulture for their livelihood. Says the 56-year-old horticulture scientist after the conclusion of his 650 km field trip beginning with Buldhana, Akot, Washim and ending at Rahuri, “Bhagwa has done extremely well in farmers’ fields and emerged as the leading cultivar both for domestic as well as export market primarily due to its wide consumer appeal for its soft seeds, bright red arils and palatable blend of its brix-acid ratio.” 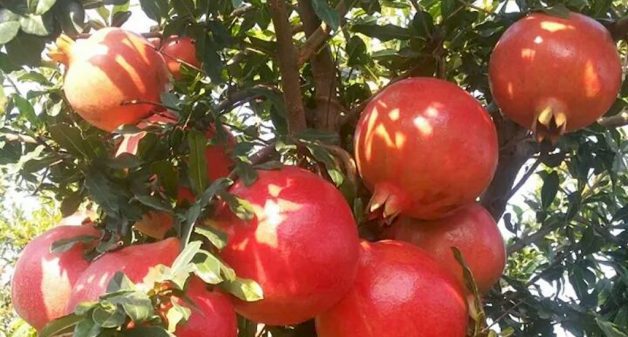 In 2015-16, the area under pomegranate has sizably increased from 131,000 hectare to 181,000 hectares with an annual production of 1.8 million tons with an average productivity of 9.88 ton per hectare, according to the 2015-16 annual report of the Solapur-based National Research Centre for Pomegranate (NRCP).

Nearly 200,000 families in the Maharashtra earn a livelihood growing pomegranate on 1,30,000 hectares. In 2016-17, Maharashtra produced 1.8 million tons of pomegranate, of which 95% was of the Bhagwa variety, according to Prabhakar Chandane, President, Maharashtra Pomegranate Growers and Research Association. “It’s one crop which has scripted a success story for thousands of farmers in the state leading farmers in Vidarbha and Marathwada also taking to it,” he told VillageSquare.in.

Among them is Vijay Dange (40), a first generation farmer who grows the fruit on his three-acre plot in Kankure village, neighboring the temple town of Shirdi in Nashik district, “I took to farming seriously after I discontinued my studies after tenth standard dropout and planted 450 saplings of Bhagwa in 2010 in one-and-a-half acre and followed it adding 385 saplings in 2013 in another one-and-half acre sourced from Rahuri Vidyapeeth,” says Dange. In the first plot, he received a yield of 27 ton while the second gave him 24 ton, which he sold at the Rahata Krishi Utpadak Bazar, 7 km away from his village, fetching him Rs 120 a kg.

Success stories of farmers like Dange have led others, especially those in Nashik to abandon the traditionally grown crops like onion, sugarcane, bajra and jowar and take up the pomegranate. Even in far off Vidarbha and Marathwada in the northern parts of the State in districts like Osmanabad, Beed, Buldhana, Wardha and Akola farmers have enthusiastically adopted pomegranate, like the 53-year-old retired Wing Commander Vishwajit Akre of Ranwadi village, 70 km from Wardha, who had nursed a passion for farming since long chose pomegranate instead of orange and cotton, the region’s traditional crop.

In 2015, his tissue culture plants of Bhagwa growing on his 10-acre plot yielded him 40 tons, of which three tons were exported fetching him a price of Rs 110 a kilo. His orchard spread on 21 acres is self-sufficient in water, thanks to rainwater harvesting and bore well injection, has witnessed a steady yield. “I follow the practice of thinning in which we don’t let a plant to bear more than 150 fruits unlike others who have 300 fruits per plant,” Akre told VillageSquare.in. He received a yield of 60 ton in 2016 and is hoping to notch 80 ton this year.

Pomegranates arrive on the market in February, offering a premium price to growers but as the new entrants, namely mangoes and grapes, make their entry into the mandis in mid-March, pomegranates encounter competition, leading to a fall in prices. In the initial months, it fetches a price of Rs 70 to 80 per kg but soon drops to Rs 35 per kg.

Veterinarian turned farmer Harishchandra Aher (52) of Deola village in Nashik, who grows Arakta, Phule Bhagwa and Phule Bhagwa Super varieties in his 10-acre plot, told VillageSquare.in, “A majority of growers suffer from the herd mentality and rarely study the market, the consumer preference and the exoticness of fruit or vegetable before planting. Rather than go for shimla mirchi, chinese cabbage, bokchoy, watermelon or sweet corn everyone seems to be rooting for pomegranate leading to glut and fall in prices.”

As India produces the finest edible quality of pomegranates, which is available almost throughout the year, there is tremendous potential for it to reach the foreign shores. Efforts by the Maharashtra State Agriculture Marketing Board by setting up an export facility centre in Jalochi (Baramati), obtaining the brand name, MAHAPOM, training scores of farmers for export quality production and registering them with GLOBALGAP certification, a non-governmental organization that sets voluntary standards for the certification of agricultural products around the globe, still there is much to be done.

Another area that needs attention is developing post-harvest technologies. Though NRCP was formed in 2005 and has post-harvest management are among its objective it has hardly done much in this field. In fact, pomegranate de-seeder developed by Uddhab Kumar Bharal, recipient of the President’s National Grassroots Innovation Award 2009, which has been exported to Turkey and the US, has hardly any takers in India and totally ignored by those involved in developing post-harvest technologies.

Admits R.K. Pal, Director of Sholapur-based NRCP, “There is no machine in the world which can extract the pomegranate arils (edible part) with 100% damage-free condition. If one aril gets damaged in the package, the whole lot gets spoiled.”

With the rapidly changing socio-economic scenario imposed by climate change, water scarcity, small land holding, etc., pomegranate crop is getting popular and thriving due to its wider adaptability. A highly remunerative crop for replacing subsistence farming with high potentials to develop wastelands, pomegranate is well suited to the topography and agro-climate of arid and semi-arid regions.

“The Phule Bhagwa Super variety has come as a boon for farmers in Maharashtra and it is our earnest desire to take it dry land farmers in Karnataka, Rajasthan, Gujarat and Madhya Pradesh so that they too can benefit from its cultivation and share the super food with health-conscious individuals,” K.P. Vishwanatha, Vice Chancellor, MPKV, Rahuri, told VillageSquare.in.