Small pumps are a viable solution for poor farmers

Many small and marginal farmers in Lohardaga and Gumla are using tiny pumps to irrigate vegetable fields, an entrepreneurial model that has potential to increase incomes for smallholders since groundwater is abundant in the state 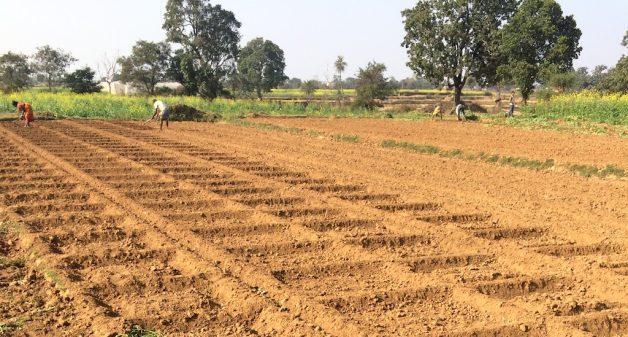 In Datma village in Kisko block of Lohardaga district in Jharkhand, a lift (device for pumping water, usually of capacity more than 5 horsepower) stands on a small body of water. The lift was meant to cater to the irrigation needs of farmers. The system of operating a lift is simple. One operator is appointed who is given paid a fee for regulatory work that he does. The farmers share the water on an hourly basis, for which they pay rent, during paddy cultivation and the winter season.

Such devices dot the landscape in Lohardaga and Gumla districts of Jharkhand. They came on different subsidies and were either promoted by civil society organizations or by government departments. However, due to irregularity availability of water, the lifts became highly susceptible to preferential water allocation. The farmers with less land and scattered landholdings did not have control over water for irrigation in their fields.

Thus, the idea of collective water sharing did not catch the fancy of people in the region, and the lifts were now being by lesser and lesser number of people. As a consequence, in these pockets small pumps made their way into being used as primary devices for irrigation as they provided greater control on water for irrigation to small and marginal farmers.

“We cultivate tomatoes and cabbage thrice in a year to minimize the losses. Even if one crop goes bad, the other two can easily cover up for the same,” said Arjun Prajapati in Aria village of Lohardaga district. “We use smaller pumps because they are cheap. They can run on single phase electric lines too.”

“Earlier we had an electric lift in our village, which stopped working because of lack of maintenance,” said fellow villager Vinod Prajapati. “Usually while growing one crop of tomato on an acre, we expect a gross income of Rs 1 lakh from the same so it makes for a viable income source for us. As more people are now taking up vegetable cultivation because of higher returns, people have started digging tube wells and bore wells.”

In a state where irrigated area for marginal farmers is only 10% of the gross cropped area, although small in number, these farmers stand out as exceptions. In order to understand the use of small pumps in Jharkhand, a study was conducted in districts of Gumla, Lohardaga and Ramgarh and a total of 47 farmers were interviewed. 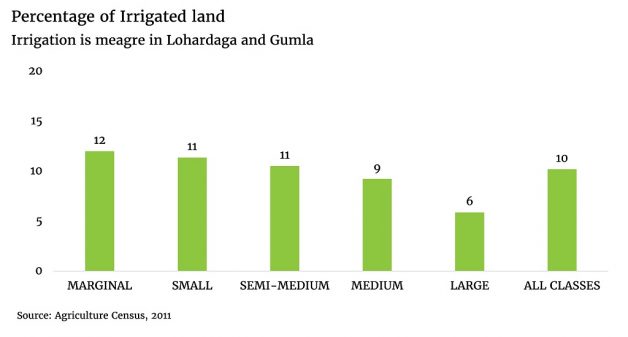 The areas around the town of Bedo have seen an increased interest by farmers in vegetable cultivation. This is due to two reasons — proximity to markets like Ranchi and increased use of shallow groundwater. Also, this could be attributed to the widespread use of smaller capacity pumps, used either on surface sources or to extract groundwater.

These pumps entered irrigation a decade back in the region, due to a subsidy offered initially to farmers on kerosene, which popularized its use in agriculture. However, as the subsidy receded, these kerosene pumps became unpopular, primarily because of the high operational cost. On the other hand, the popularity of small electric pumps was highly dependent on the availability of electric connections in agriculture, and therefore still is limited in a state like Jharkhand. A typical sight during the months of October-November is that of famers carrying small diesel pumps with pipes on the back of their cycles from one place to the other.

The dealers and retailers have reported an increase in the use of electric pumps of late. Diesel and kerosene-run pumps, although popular in areas with no electric connections, provide a disadvantage in terms of high operational cost. Chinese electric pumps, on the other hand, are easily available in the markets of Ranchi, which range from Rs 3,000 to Rs 4,000 (1 HP electric pumps). The most widely used diesel pumps are Honda and Vijay (more than 2 HP), which cost around Rs 10,000. Operation and maintenance for the small pumps is lower compared with their larger counterparts.

Although there is an absence of water markets, farmers tend to use water from wells of other farmers for irrigation on an informal basis. In other places, water is extracted with mutual consent of two or more farmers. Pumps, however, are still being used on rent, prices of which remain constant in the village. The rent of the pump per hour is Rs 60-80, where the farmer has to bear the cost of kerosene. To avoid such burden, one farmer ventured into purchasing a secondhand pump for Rs 3000 (3 HP Honda Pump, 4 years old). 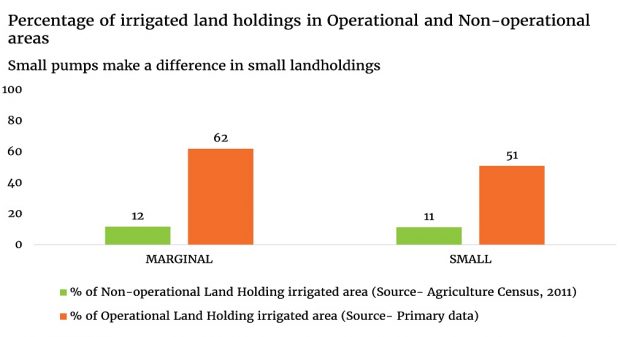 Leasing in of land is also a common feature amongst marginal farmers, due to highly scattered land holdings. “I used to migrate earlier to Pune for working as a security guard. But that was not working out, as my family could not move to Pune with me,” Shiv Tehel Singh in Mariyam Toli village of Raidih Block of Gumla district told VillageSquare.in. “Using my own small pump I have been growing vegetables in the last year on my land.” The patterns of sharecropping have also changed in recent years. Marginal farmers are taking in land on lease from lager farmers for cultivating vegetables.

Irrigation intensity for vegetables, being grown during the summer, ranges from 100-150 hours for half an acre of land using the small pumps. Considering a usage of 1 liter of diesel per hour, this would mean a total irrigation cost of Rs 7,000-8,000, for three months. This explains the choice of vegetables being cultivated by the farmers. Tomatoes, especially during March–May yield best results for the farmers. Additionally, pumps are also being used to irrigate crops like paddy and maize during the Kharif season, which otherwise due to lack of sufficient rains might have been spoilt.

The number of tube wells in a vegetable-growing village near Gola has doubled in the last four years. There is a possibility of high renting in of water in the years to come, as some farmers neither have access to groundwater nor means to extract the same, therefore being at a disadvantaged position. All the interviewed farmers did not consider dairy to be an enterprise due to their preoccupation with vegetable cultivation and gathering means for irrigating the same. No one was in mood of growing fodder specifically for feeding cattle, they rather preferred sending them off to nearby grazing lands, opening the gates of another widely common problem in the area — free grazing. 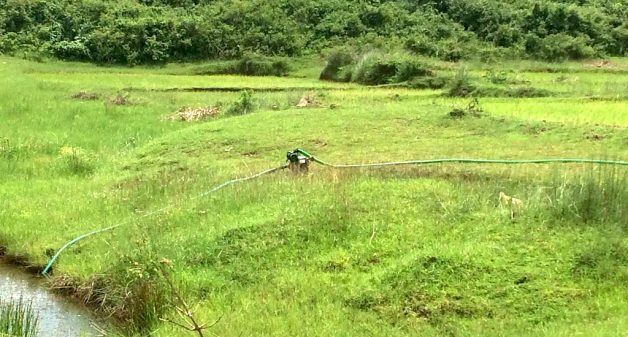 A small pump is in action in Jharkhand. (Photo by Bikalp Chamola)

Farmers in villages that have a practice of free grazing leave their cattle to graze after the months of the Kharif season. This prevents others who have access to water, to grow crops. Due to free grazing, farmers are not able to cultivate anything during winters, as strict watch is required to stop cattle from entering the field.

Farmers have said that their income from agriculture in the last few years has significantly increased. Almost 60% of the income now comes from vegetables, which are being irrigated using smaller capacity pumps. These are primarily jackfruit, cabbage, cauliflower, tomato, brinjal, cucumber and garlic. In Gola, farmers have stopped cultivating wheat in the last two years, and are growing vegetables. The clusters around Ranchi provide a strong case for entrepreneurial farmers, adopting small pumps on their own, and earning good incomes from vegetables.

What remains to be seen is that given the extreme poverty and distress in the state, can small pumps help small and marginal farmer to regain the control of their own land by accessing abundant groundwater available in the area and earn well in their own villages? Can this small number of farmers cultivating vegetables be seen as evidence for a large potential for the state to become the primary source for vegetables in the urban markets eastern India? Can small pumps, rather than larger pumps, be the engines for ensuring har khet ko pani (water for every field)?