Many fellows but not too many ships to anchor

Small pumps are a viable solution for poor farmers

Although small pumps for irrigation doesn’t get the attention it deserves, evidence from groundwater-rich states such as Assam, Jharkhand and Odisha show that they have significant benefits for small and marginal farmers 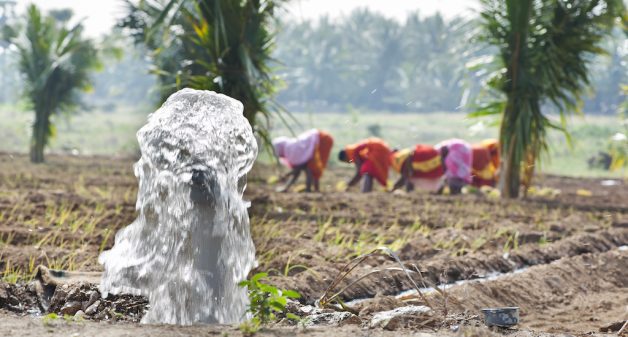 Small pumps, those that have capacity of less than 1 or 1.5 horsepower (HP), are proving quite effective these days. They should have been effective all these years as well.

Small pumps offer several advantages. In the first place, the investment needed to acquire them is much smaller — between Rs 5,000 and Rs 15000 against double that for the more conventional and commonly available 5-8 HP pumps. Secondly, because they are lighter, they are more portable and can be carried on the back or on a cycle to serve several land parcels. Third, the water discharge rate is such that it does not cause topsoil erosion.

Fourth, small capacity electric pumps can be run on domestic single-phase connections available far more easily even in poorly electrified areas, than the 3-phase high-tension connections needed for larger pumps. Fifth, they tend to be applied typically for growing vegetable or flower crops, which yield much greater income per drop of water. Sixth, because they can operate only with relatively lower heads, they cause much lower depletion of water levels in aquifers, hence retarding its contamination with dissolved iron, arsenic, fluorides or other salts. Thus, small pumps tend to be more environmentally sustainable.

Finally, if one helps the small holders with larger subsidy to enable them to acquire low discharge solar powered pumps, the small pumps can become powerful weapons to fight poverty and raise incomes in even the most remote parts of the country. With constantly falling costs of solar power, this offers a huge promise. Why then have they been neglected? What lesson does this neglect show us?

Diesel powered or electric pumps are used in agriculture primarily as water extraction mechanisms for bringing water from aquifers to the surface. This became increasingly necessary in the southern, northern and western parts of peninsular India from about 1970. Till that period, irrigation was largely based on dug wells. Deep drilling technology made huge inroads from about the severe droughts of 1971-73 that ravaged most of Maharashtra, Karnataka, Telangana, Gujarat and Rajasthan.

And with that the spread of groundwater irrigation started its exponential growth till it now reaches over 20 million well and pump combinations. But the point is, this is mostly the phenomenon of the mainland India tilled by caste Hindu, traditional farming communities.

As aquifers started getting emptied out, tube wells started reaching further and further in the belly of mother earth. In 1987, when I undertook my fieldwork in Mehsana in Gujarat, farmers told me that the submersible motor had to be lowered by an average of 25 feet every second year. With increasing head, the power required for pumps kept on rising and demand for more and more powerful pumps dominated the market. Hence, the pump market essentially got shifted to catering to these high head applications. The story repeated itself in most areas where farming occurred on back of ground water irrigation.

The situation in Assam and most of the undulating, hilly and mountainous terrains inhabited by tribal folk had always experienced a different set of circumstances. Assam had relaxed land situation till the unwelcome guests form Bangladesh started large-scale migration. Most of the rural denizens tend to be complacent and satisfied with their lifestyle rather than ambitiously trying to intensify their farm operations. The widely prevalent free grazing after the Sali crop is harvested validates this assessment. Most native farmers of Assam continue to enjoy a reasonably large land holding even now.

Only the immigrant, whether legal or otherwise, encroached and squatted on small pieces of lands in the flood plains or forest lands and were forced to till more intensively, using even a manual treadle pumps in densely populated Dhubri-Mankachar area. On the whole, given the abundant rain and easy availability of surface water made farming based on retained moisture or on surface water possible. Floods and water logging rather than water scarcity has always haunting Assam. The native Assam farmers have taken to growing second crops only in more recent times — since about the mid nineties. As such demand for pumps optimally suited for them did not arise.

The situation in tribal lands was dissimilar only in terms of resource conditions. These regions had relatively more accessible flowing water offering possibility of good harvests in low lands. But the stock peasantry here was not as well versed in the art of farming nor as enterprising in their attitude as they were descendants of simple children of nature, who believed that their abundant forest resources could provide for their needs. Hunting is a huge draw even now in most of the tribal lands and gathering of things like fuel wood, cocoons, mahua, chironji and many other non-timber forest produce supports more of the tribal livelihoods than crops grown on their poor quality lands.

Groundwater utilization has been much lower in most of the tribal lands in Odisha, Jharkhand, Chhattisgarh and Madhya Pradesh. Since many of these are the areas of darkness with no electricity to drive their pumps and since infrastructure is so poorly developed that diesel needs to be purchased from distant towns poorly connected with their villages, most farmers in interior parts of these regions never thought of irrigation. Again, those few who did went in for deep wells and large capacity pumps.

As the pressure on land has mounted, communication improved and infrastructure developed, the realization that they must use their land resources more intensively started dawning on the farmers in Assam as well as the tribal regions. But the fact was that they were new to irrigated agriculture, had limited experience of growing crops for markets rather than for home consumption and had little investible surpluses. Their capacity to innovate and take chances was limited.

Depending on government largesse

So they followed the simplest route — try to get what they could from the government. Most Government schemes like the Million Well Scheme or the Shallow Tubewell programs offered large capacity pumps on a subsidy and this is what the farmers got. And this is all what even the small holders could see shaping their mind set.

So, a strong pull from mainland India for high-capacity pumps caused a supply shift to large pumps and a weak recognition and articulation of their special need resulted in need of farmers from these regions not getting converted into demand for small pumps. This is how development of small pumps, suited for the resource conditions of tribal lands and for Assam valley never got the attention they deserved.

The single-most important lesson it provides is that someone needs to constantly think of the most appropriate technology for resource conditions particularly of the poor folk. And having thought, to initiate action, try out solutions and popularize them among the possible users. They say advocating with governments is necessary for large-scale adaption of such technologies. Realism prompts me to say that it is perhaps optimistic to think that Government machinery will think about or even pay heed to the situation faced by the voiceless poor farmers and to evolve solutions for them on its own.

Making the government listen to the needs of the poor is a task that perhaps has very uncertain outcomes compared with popularizing the appropriate technology directly to the poor.