After the century’s worst drought, people in Kerala are now getting ready to harvest rain in their backyard wells, temple ponds and lush forests. Citizens, voluntary groups and the state government are ready with a set of measures. It just needs to rain. 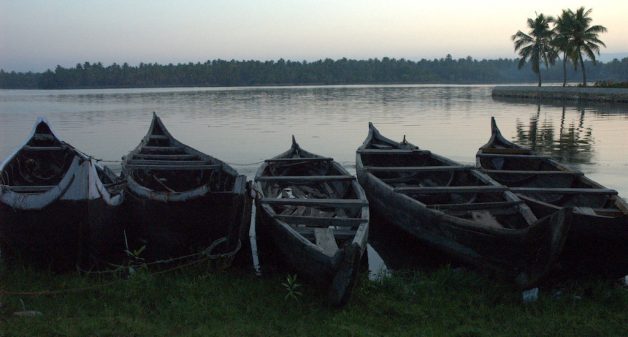 Kerala is a land of water bodies. A state government mission now aims at conserving, cleaning and clearing them up to store water and to aid water transport that the state is known for. The image shows the lagoon of Kadinamkulam in Thiruvananthapuram. (Photo by Climatalk)

Pre-monsoon rains are already on and monsoon is expected to hit Kerala two days ahead of schedule this time. Kerala is mainland India’s doorstep for the monsoon where it enters with clockwork precision on June 1 usually. Now that the rains are here, Kerala has a chance to catch it where it falls, and a policy push to this effect come from chief minister Pinarai Vijayan, who is not known for his green sentiments. Extraordinary times in Kerala often demand extraordinary measures.

This tropical state, lying between 8°18′ and 12°48′ North latitudes, receives annual average rain of 3,107 mm, enough to sustain rain forests that the state is home to. Even Kerala’s dryer parts get 1,500 mm rain, which is more than India’s country average. The monsoon rains are spread over 120 to 150 days in two stretches.

The state is usually so wet that people fetch drinking water from open backyard wells two to 10 meters deep. Temple ponds are always full and deep. You can travel from south to north along waterways, almost uninterruptedly. The concern is that all that is going to be an old tale at some point. Scientists have already painted a grim picture of Kerala going dry in the coming years in a changing climate, rising cities and vanishing forests and farmlands. They say omens are already visible.

A “grave situation” is how revenue minister E. Chandrasekharan called it in his budget speech in March. Over half of the reservoirs have dried up and he had to disburse Rs 295 million to districts to take care of drinking water shortage in the state. Last year the southwestern monsoon rainfall during June -September was short by about a third; and the northeastern monsoon came late with an even bigger deficit.

Vijayan has urged local bodies to use Mahatma Gandhi National Rural Employment Guarantee scheme, which ensures 100 days of work to every poor rural household, to build check dams and clean canals and ponds. The centre has announced Kerala as drought-hit, funding the scheme even more. Vijayan has welcomed schools, colleges, local self help groups called Kudumbashree and local governance institutions to contribute to conserve water in the state’s countless ponds and wells, and save rivers, canals and lagoons that run along and across the whole state.

The chief minster’s green mission, known as Haritha Keralam, aims at conserving, cleaning and clearing up these water bodies. “The success of Haritha Keralam mission will depend on how far it reaches out to the people,” Vijayan said in a media statement.

At local level, where Kerala has a vibrant Panchayati Raj system, the government has urged the local institutions as well as 200,000 volunteers of Kudumbashree to chip in to the efforts. Kudumbashree is the women empowerment and poverty eradication program, framed and enforced by the State Poverty Eradication Mission (SPEM) of the Government of Kerala. 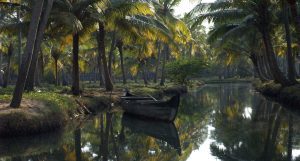 Wetlands are the lifeline of much of rural Kerala. Still many wetlands and small canal systems like the one in shown in this image from a Thiruvananthapuram village are now threated due to reclamation for construction. Such a trend upsets local water storage, well recharge and drainage. (Photo by Climatalk)

The local bodies are promoting rainwater harvesting in houses, with the state government providing subsidies to install rooftop water harvesting systems. A new technology being introduced is a in situ filters that clean up the water at the collection points so that it flows straight and clean into the wells.

The state’s low-cost housing lobby comprising architects, environmentalists and planners, has been promoting water conservation at household levels. At a recent fair at the state capital, they demonstrated harvesting and filtering techniques, and pushed it as a solution to a dip in ground water levels. As per 2001 Census, 72% of households used water from open wells, but their numbers reduced to 62% by 2011.

As for civil society efforts, Mazhapolima (Bounty of Rain), an NGO based in the central district of Thrissur, has floated a participatory effort at groundwater recharge using shallow dug wells. After its success in Thiruvilwamala, the birthplace of the iconic Malayalam writer Vadakke Koottala Narayanankutty Nair, the technique is now catching up elsewhere as well.

Besides promoting such efforts, the government is considering control on ground water extraction, as minister Chandrasekharan stated in his budget speech. Besides, industry-scale extraction of ground, destruction of the Western Ghats ecosystem and deforestation, bad building practices are also contributing to a trend of water shortage according to some of the green architects.

Sloped roofs that are exceptionally good at directing water from the surface into the guttering and to collection points gave way to concrete flat roofs during the construction boom of the 1970s and 1980s. The concrete flat roofs are inefficient in terms of insulation from heat and directing water. There has been a very slow reverse trend of late.

Another trend that prevents water seepage into the well is the practice of paving or plastering the space around houses, leading to flush drainage of water in a matter of minutes. Exposed loose sand, soil or lawn would aid seepage of rainwater into the ground contributing to wells and ground water aquifers.

“Even though the state gets 3000 mm of rains on an average in a year, accelerated run off to the sea leaves very little water behind,” says a Mazhapolima spokesperson. Architect G. Shankar, a Padmasree award winner who heads the Habitat Technology Group in Thiruvananthapuram, says much of the prevalent building practices go against the housing ethos of the state and the environment. “We need a sustainable construction policy for urbanization,” Shankar told VillageSquare.in.

Not only have Kerala’s farmlands, villages and cities been affected by the drought, but also Kerala forests and water holes have been drying up, potentially driving animals to villages in search of water; and dried grass and bamboo posing threat the wildfires that are rare in Kerala.

In northern Kerala, at the southern tip of the Deccan plateau on the Western Ghats slopes, 200 waterholes in three forest ranges of Wayanad district have dried up, forest officials said. In Muthanga range, there are 60 water holes and Bathery 100 and Hurichiyat 40, from which around 400 elephants, 60 tigers and hundreds of bison, bears, deer and monkeys drink. “Rainfall in Wayanad has gone down by 45%,” Wayanad wildlife warden P. Dhanesh Kumar told VillageSquare.in.

That means the local forest streams have dried up. “Though all the streams connecting Noolpuzha have dried up, we have certain quantity of reserve water in two dams. We have taken steps to fill the water holes, taking water in tankers,” said Sajeev M P Kurichiyat, deputy range officer.

Forest officials said the Kabani River, one of the rare east flowing rivers in the state with its two tributaries Panamaram and Mananthavady, were helping them tide over the water crisis. In Muthanga, range officer S Heeralal and colleagues were planning earthen bunds (embankments) and tarpaulin-lined artificial ponds to store water.

Environmentalists have pointed at three reasons behind the water crisis in the forests. Many rocky structures along the Western Ghats foothills are being flattened by quarry operations, thereby killing springs close to their origins. A lack of green cover on hill slopes increases water runoff, decreasing recharge of springs. A reduction in canopy also reduces soil moisture.

Environmentalists and local officials have been lobbying to put a stop to rampant deforestation and construction in an around Wayanad. A recent drive to demolish illegal constructions in the region has stumbled on protests from migrant farmers and political and religious groups that patronize them to the point that the whole operation had to slow down.

In Kerala, which calls itself the God’s Own Country, drought is a not just a climate and weather-related phenomenon. At the same time, Keralans are also historically known for collective social action to save their environment as displayed by protests scrapping the Silent Vally dam project in rare rainforest back in the 1980s.

Ajith Lawrence is a journalist and community broadcaster based in Thiruvananthapuram. MM Paniyil researches and writes on environmental issues, and is based in Bangalore.

Ajith Lawrence is a journalist and community broadcaster based in Thiruvananthapuram.