The last few practitioners of Chador Badoni, a form of puppetry, and Jadu Patiya, a form of painting and story telling, say their art forms may soon be lost to modern times unless there is a serious attempt to revive them 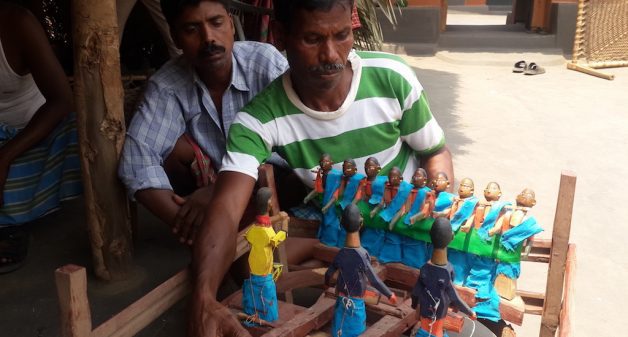 Babudhan Murmu with a set for a Chador Badoni show. (Photo by Channdosree)

In the online age when people are looking for more avenues of entertainment, when the Internet and Googling have become easiest way to knowledge and entertainment, two traditional art forms of the Santhal Pargana are in for a revival.

Chador Badoni, a form of puppetry, and Jadu Patiya, a form of painting, are now limited to some rural pockets in Dumka and practiced by less than a dozen artists in entire the entire district, tell the tale of how soon it might be be lost to history. An internet search of both the art forms yields only nine results for Chador Badoni, out of which only one gives a little information of the art form, whereas out of little more than 3,500 results for Jadu Patiya doesn’t throw light on the present status of the beautiful art.

India is known as land of art and culture. Jharkhand that was carved out of Bihar on November 15, 2000, too has some special forms of arts that require attention. While Sohrai and Kohvar paintings of Hazaribagh, falling under North Chotanagpur division of Jharkhand, has been well explored and one can see examples of the art on most of the popular boundary walls across Ranchi, the capital of Jharkhand, including that of chief minister’s residence, Jadu Patiya has lost its sheen. Although Dumka being sub-capital of Jharkhand located around 305 km northeast of Ranchi, the intensity of the art form has not been judiciously used.

From time immemorial to the pre-independence era in India, both Chador Badoni and Jadu Patiya enjoyed its own value in Santhal villages. Both the forms were used by the freedom fighters to reach out to people to induce patriotism and for entertainment as well.

“Chador Badoni, which means small wooden idol, is a kind of puppet show. In this we make small wooden puppets, of both male and female figures, doing various activities, as per the need of our story and put it on a base for the show,” 50-year-old Babudhan Murmu of Badi Tola of Naoasar village of Hathiapathar panchayat in Masalia block of Dumka told VillageSquare.in.

Being a lone performer from the block and none of the three adult sons ready to carry forward the art form, Babudhan feels the art will die soon. “Making this khancha (frame) on which the dhuda (base) and pad (another base to fit the puppets) are fixed and every little puppet is a tedious job. Constructing one frame for Chador Badoni costs around Rs 25,000 against which we hardly earn Rs 50 to Rs 150 a day, carrying it on head from home to home for show. We call it bhikari para (ask for money or grains). I start the show from Bhadra maas (around August) and continue showing it till Kali puja (end of October or mid-November),” he said.

Explaining why his sons and others from the young generation are interested, he said, “All have mobiles in hand. Why would they take interest in seeing something obsolete? And my financial situation prevents me from doing any value addition to the shows, so this art will die.” 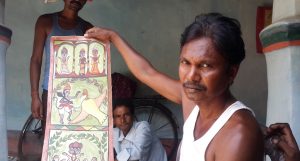 Ganapati shows a mythological story through the Jadu Patia. (Photo by Channdosree)

While Babudhan has his own reasons to announce that situation is ominous for Chador Badoni, three Jadu Patia artists of Naoasar have equal concerns for their paintings in which none takes interest in learning.

Ganapati Chitrakar (50), eldest of the three, explains the art. “This is one of the oldest forms of paintings for which we still use raw natural colors like geru pathar (a red stone), sim pata (leaves of broad beans) and lamp black. The three are mixed in various ways to get different colors,” he told VillageSquare.in. Painting brush is shaped out of thin twigs. We think of a concept, make a song on that concept and then make a series of paintings, which ranges from 10 to 12. We connect each painting using homemade glue and once all the paintings are done, we roll it. While performing we open the roll, show one painting at a time and sing the story.”

Throwing light on how Jadu Patia got its name, Nitai Chitrakar (40), another painter of the same village, said, “Jadu means magician and Patia means painter. Centuries ago, as my grandfather used to say, the painters used to visit to houses where someone has died. In the scroll the dead person’s painting was shown without pupil in the eyes and the family was narrated about the suffering that the soul might go through and hence to bring back the pupil some daan (donation) was sought. In the consecutive scrolls, the dead man was shown happy in heaven and hence the family used to get satisfied.”

But with changes in the society the painters have come along with paintings based on mythology and folklores. “Yet there are no takers. I make some money only during any festival that too around Rs 150 to Rs 200 a day. Else I am a daily wager,” said Jaydhan Chitrakar (22), whose father late Kamal Chitrakar was a noted artist and was featured in various foreign magazines, he claimed.

Nitai and Ganapati claimed that they were lucky enough to showcase their talent at a show in Bhopal, and Ahmedabad some years ago, where they received Rs 25,000 each but after that they did not get much of attention.

Chador Badoni and Jadu Patia are indigenous and rare forms of art but the Jharkhand government does not have any action plan or strategy for its revival.

Louis Marandi, state’s social welfare minister from Dumka constituency, denied that art forms are dying. “Many people are practicing the arts,” he told VillageSquare.in. “We call them during special occasions in Ranchi.” But she failed to say whether the art and culture department has any list of all the artists still practicing and are not making a living from being daily wagers.

Manik Chandra Mandal (60), an elderly gentleman from Naoasar, made a request with folded hands: “These arts have generated from our land, please do something for its revival.”