There is no silver bullet to defeat the scourge of underage marriages. Rather, it is important to extend the scope of current interventions among adolescents and the communities they grow up in, which then need to be backed up by suitable government policies 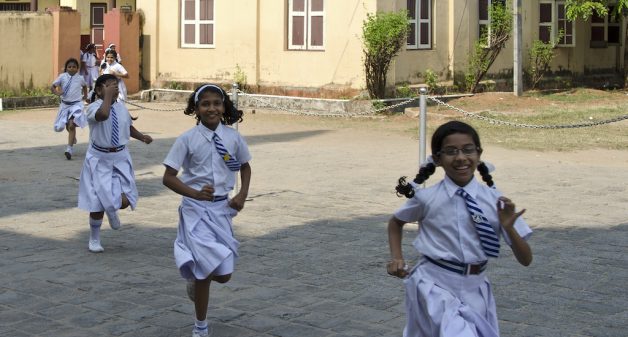 Keeping girls in school is an important way to push back underage marriages. (Photo by Eric Parker)

Child marriage is not only a violation of the rights of the child, but also a serious hindrance to the development of any country. Underage marriage disproportionately affect indicators such as female literacy as well as create higher morbidity, higher infant mortality rate (IMR), maternal mortality rate (MMR), and increase proportion of stunted children in the population.

Some Indian states are much worse in child marriages than others. For instance, some areas within Uttar Pradesh are particularly susceptible to child marriage. The NGOs working in some of the villages along the Nepal border in Uttar Pradesh say that the prevalence rate is as high as 70%. It is the same in predominantly tribal areas of the country. The marriage age among some of the PVTGs (Particularly Vulnerable Tribe Groups) is as low as 12 years for girls. Thankfully, the rest of the country fares better and balances this percentage at the national level.

Boys are affected too

What happens to these girls and the children born to them needs no second guess. Globally, girls are disproportionately affected by child marriage. However, in Uttar Pradesh, the baseline conducted by NR Management Consultants (NRMC) with Breakthrough Trust shows that young boys are affected too. There is a huge pressure on young boys to earn and in eastern Uttar Pradesh earning is mostly associated with migration. The families want to marry off the boys before they migrate for work because they feel if married the boys will come back to the village from time to time, and they will not marry in another community upon reaching the destination. It is a strange interplay of the need of the hour and norms held for centuries.

Part of the problem in child marriage is the term marriage itself. The word marriage evokes positive emotions in general. One would often read about a community marriage organized by a legislator as a good deed. On this, the government’s policies also play a role and as a NGO worker from Maharajganj pointed out, “If you look at it carefully then whichever government has come to power in Uttar Pradesh, all have created schemes that gave money to Dalit families for daughter’s wedding. This increases the incidents of child marriage among the poor communities who are mostly Dalit and OBCs (Other Backward Classes).”

The Uttar Pradesh government relaunched Putriyon Ki Shadi Hetu Anudan Yojana in December 2016. The scheme provides financial assistance for the marriage of young women whose family doesn’t have enough money for it. They increased the support amount and excluded the support given for medical treatment. The logic was that medical treatment is already free in government hospitals. The baseline mentioned above also shows higher incidence of early marriage among the lower castes and poorer communities.

The mindset regarding marriage of daughters being a pious thing makes it more difficult and this mindset has disastrous impact. In India, we have got used to the 20% gap between male and female literacy. We do not even bat an eyelid any more. However, the National Family Health Survey 4 (NFHS4) that recently released its data shows that only 35% Indian females could get at least 10 years of schooling. That is, 2 out of 3 women in the country do not even get 10 years of education. When Breakthrough Trust came up with the campaign called Mai hu Rashmi, Matric pass, there was discomfort with the campaign because passing out 10th Class (matriculation examination) does not mean a child has attained the age of marriage. However, the NFHS4 data brought one down to the reality.

In Uttar Pradesh, the task of addressing child marriage is daunting. One of the main issues is the lack of birth registration of children in the pockets where there is high number of child marriages. At the time of the marriage, if a family is challenged by the local organizations, they promptly get a certificate by registering the child as a family member in the Uttar Pradesh Parivar Registration office with the help of the Panchayat Secretary.

An interesting insight that a NGO worker from Maharajganj provided was, “Have you ever thought why all the girls who get married are 18 years old on paper? Why not any other age? Why not 19?” Whether they are 18 or not, everyone knows the legal age of marriage is 18 and hence that is the age that gets recorded in official documents.

This issue of unavailability of age-proof is not going to be solved by making unique identity numbers (Aadhaar) mandatory for all the children studying in school, as date of birth can be corrected with supportive documents such as a certificate from the Parivar register. It will thus be very important to register all children at birth and making it difficult to change this date later. To be able to succeed in this, there is need of working on changing social norms, which will work on both the family as well as the relevant stakeholders that make child marriage possible despite it being illegal.

In the last few years, child marriages below the age of 15 have rapidly come down. However, the desired dent in the age group of 15-18 years has not been achieved. The challenges that exist both in the policies as well as in the societal norms come together to make it even more difficult.

So far child marriage prevention programs have employed strategies that include empowering girls with information, skills and support networks; educating and mobilizing parents and community members; enhancing the quality and accessibility of formal schooling for girls; offering economic support and incentives for girls and their families; and fostering and enabling legal and policy framework.

All these strategies alone or in various combinations are important. However, these strategies have further scope of improvements in terms of sharpening of strategies, and additional components being added. For example, working with the boys of the same age group. As my previous article on the same topic highlights, boys have constant pressure to man up. This in a way makes it almost mandatory for them to harass girls. It is like a coming of age ritual.

This in turn is a big reason why girls drop out. Safe passage to school thus needs to move up high in priority. This can happen by engaging with boys in a strategic manner. Creation of spaces where boys and girls can interact with each other constructively will be important. The myths around difference of sexes can be broken. Adolescent boys are also highly vulnerable to violence at home as well as outside. Unless we make violence unacceptable in general, it is difficult to make violence against women (in this case girls) unacceptable too. It is thus important to constructively engage with boys on the issues of consent, constructive interaction with the other sex, and unacceptable nature of violence. One has to address the norms around masculinity to be able to reach a discrimination free society.

Secondly, traditional society holds the belief that girls should be married off when they attain puberty and the government policy regarding compulsory schooling till 14 years makes these girls even more vulnerable by removing the security of Right to Education (RTE). As RTE does not cover that vulnerable age of 15-18 years, girls are at higher risk of getting married. The schools on the other hand, lack functional toilets that are very important for the girls attaining puberty. It is a rough estimate that about 5% of the toilets are truly functional in the rural areas of eastern Uttar Pradesh. The high schools are situated quite far from villages. This issue got prominence recently when girls from Haryana’s Rewari district went on hunger strike demanding schools in their villages. One of the important issues that got completely missed in this was the issue of safe passage to school. If the harassment does not stop, it severely limits the mobility of the girls.

Thirdly, the family itself is a big challenge for organizations trying to prevent child marriage. However, the families that try to support their girls’ education face an even bigger challenge. It is important to create a counter-culture. One must support these parents by celebrating this deviance of a positive nature. The girls who become informed adults through higher education generally want to assert their choice in their own marriages, which is still not acceptable to the community.

This takes us back to the question of why marriage should be perceived as an end-all goal in a girls’ life. A girl’s life should be perceived as a human life full of her own dreams for her own self. The claim of another family from the very first day in a girl’s life is too harsh a reality that the South Asian girls face. This needs to be addressed at various levels.

To lead from the front, political leaders and ministers must stop supporting weddings in poor families and the media must stop projecting it as a virtuous act. In many community marriages, young girls are often married off, and in recent years, girls have contested such marriages on legal grounds. Instead of giving this kind of acts media space, the acts of providing scholarships to girls for higher education should be given much higher priority.

The narration around giving or donating one’s daughter being a pious act must change. This will go a long way to address child marriage. Finally, marriage should stop being the worry of the parents and the children should be able to decide who and when to marry themselves. That’s probably still a long way off in this country.

Nayana Chowdhury is Program Manager at IKEA Foundation. She started her career with a grassroots organization that supports people’s movements to secure basic human rights and entitlements in rural and tribal areas of India. Chowdhury also had a long stint with the Tata Trusts. She has a Master’s degree in Social Work from the University of Delhi.

Nayana Chowdhury is Program Manager at IKEA Foundation. She started her career with a grassroots organisation that supports people’s movements to secure basic human rights and entitlements in rural and tribal areas of India. Chowdhury also had a long stint with the Tata Trusts. She has a Master’s degree in Social Work from the University of Delhi.