At a time when social media is being used to spread lies and malicious rumors, a group of young people in Assam are using WhatsApp and Facebook groups to prevent child marriages in the underdeveloped district of Darrang 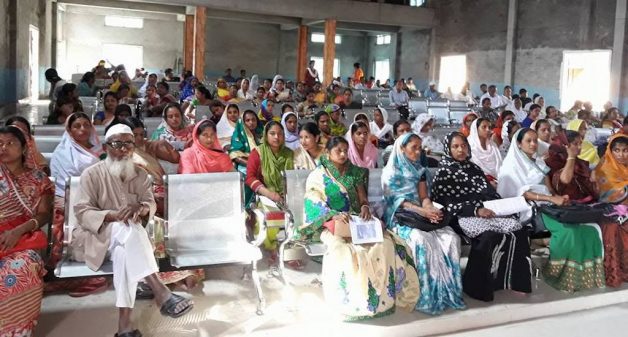 Rulima Khatun of Dalgaon in Assam’s Darrang district, one of the most backward areas of the state, is just 17 years of age and she is not as unfortunate as many of her friends in the neighborhood. She had a narrow escape when her parents wanted to get her married to a much older man when a campaign through Facebook and WhatsApp groups came to her rescue.

Khatun is safe for the moment. “It was a mistake and I have admitted to it,” Nuru Sheikh, father of the girl, told VillageSquare.in. “I will not commit such a mistake again.” However, this practice is quite common in these areas.

Similar arrangements were averted by members of Facebook and WhatsApp group in Baragua in Barpeta district. Ayub Ali, father of a teenage boy, later admitted of his intentions.

At a time when cases of misuse of social networking sites are on the rise, a section of youths in Assam are using it as a tool to fight social evils like child marriage. For supporters of child marriages, some Facebook and WhatsApp groups have become a major threat.

“We are really happy to overcome a huge challenge by a section villagers by motivating the youths with the help of Facebook and WhatsApp,” Ainuddin Ahmed, general secretary of AAMSU, told VillageSquare.in. “I didn’t start it from the AAMSU platform but as an individual experiencing the pathetic condition of the society, especially among the uneducated and poor sections. But later, the youths in the students’ body supported me in a grand way. It was overwhelming.”

Besides members of AAMSU, there are others who are also in the groups to help in curbing the social crime, including different NGOs and police. “But I want more proactive role from the government agencies for better results,” said Ahmed. 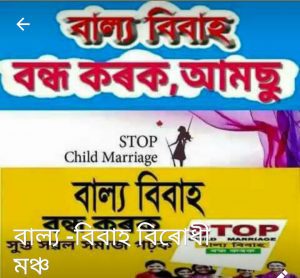 A screen grab of the WhatsApp group. (Photo by Abdul Gani)

The road was not that smooth for these youths. They had to face the wrath of some goons under whose patronage these underage marriages used to take place. Many activists were beaten up. Ashraful Hussain, a youth activist, was once beaten up and threatened by the grooms’ family at Bhoiraguri and Kahikuchi village in Barpeta district.

“When we tried to stop a child marriage, a mob from the groom’s family attacked me and my friend. They beat us up and held captive till it was midnight. Finally, police along with my friends arrived and rescued us,” Ashraful told VillageSquare.in.

This is not a lone incident. Several activists of AAMSU faced similar situations in Kharupetia in Darrang district. Mustak, one of the admins of the WhatsApp group, said that they have lodged a police complaint at the Kharupetia outpost.

“At least four of our activists sustained injuries after a group of goons launched attack on us who went to stop a child marriage at Barangabari village,” said Mustak. “We have lodged an FIR (first information report) and admitted our colleagues at a hospital.”

They allege that at some occasions, assistance from the police is not up to the mark in dealing with these cases. “Unfortunately, in some areas the police are yet to be active enough to deal with such situations. The change in police is must if we really want to eradicate this evil practice from our society,” Ainuddin reiterated.

On several occasions, some of the parents have faked the birth certificates of their daughters and sons. An FIR was lodged at Baghbor police station in Barpeta district against a parent of 14-year-old girl for trying to produce a fake birth certificate.

But the Facebook page and the WhatsApp group keep them motivated and united to fight for a cause. “We keep track what’s happening all around. If someone has a problem, he or she gets an immediate response from any one of the groups to address that particular issue. That’s how it’s going on in a healthy way,” said Ainuddin.

These young activists and members of AAMSU are also organizing awareness camps in different locations and they doing it live on Facebook. On May 21, they organized an awareness meeting at Dabaka in Nagaon district, where people from different walks of life were invited and the entire proceedings were live on Facebook.

“We got a huge response from this awareness camp. We got calls from different parts of the state and gradually we will also conduct such events in nooks and corners of the state,” said Mustak, a local AAMSU leader and admin of the WhatsApp group.

Since February this year, these youths managed to stop more than 250 such child marriages directly and counseled the parents.

This trend of child marriage is mostly visible among a section of Muslims and tribal people. The reason is poverty and lack of education. “This is a serious problem among uneducated Muslims. Most of them are poor. Many still regard a girl child to be burden and want to marry them off as early as possible. This is very dangerous,” Hafiz Ahmed, president of Char Chapori Sahitya Parishad (CCSP), a literary body of Assam, told VIllageSquare.in. “On top of that, there is a section who mislead the poor parents, wooing them with money. It is praiseworthy that these youths have come out to bring a change using social media.”

Ahmed added that more numbers of educated people should come out in stop this menace. All BTC Minority Students Union (ABMSU) and two other student organizations have also extended their support in the mission to wipe out the practice.

India had a law prescribing the minimum age of marriage, known as the Sarda Act, 1929. Later renamed as the Child Marriage Restraint Act (CMRA), 1929, it prohibited marriage of girls below the age of 15 years and boys below the age of 18. In 1978, the law was amended to raise the minimum age of marriage to 18 years for girls and 21 years for boys. This position remains the same even in the new law called the Prohibition of Child Marriages Act (PCMA), 2006, which replaced the CMRA.