Although the Maharashtra government has announced a loan waiver, deeply indebted farmers of Marathwada still do not know how they will get the money to buy farm inputs this sowing season ahead of the monsoon 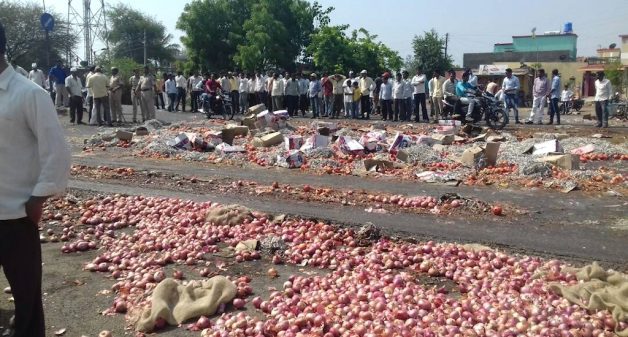 Farmers protested and threw away their onion harvest as prices crashed. (Photo by Atul Deulgaonkar)

Barma Mind of Gangapur village in Latur district is a small farmer with 4.5 acres of land. He had taken a loan of Rs 54000 from an agriculture cooperative society in April 2015. Much of the loan was used for medical treatment of his son Santosh, who consumed poison in an attempt to suicide. The remaining money helped sowing in that season that proved futile, as there was no timely rainfall.

Mind’s agriculture cooperative society charges 11 % rate of interest to a defaulter, compared with 6% to a regular payer. His debt has risen to Rs 69,000 on March 31, 2017. He now waits for a loan waiver but is at a loss how to organize input costs for this sowing season. The same story has been repeated in thousands of villages in Marathwada.

The Maharashtra government has announced a farm loan waiver for marginal farmers, which is expected to cost the state government Rs 30,000 crore. It follows a similar announcement by Uttar Pradesh in April that is worth Rs 35,000 crore. Maharashtra Chief Minister Devendra Fadnavis has announced the state government will provide immediate relief of Rs 10,000 to every farmer owning less than 5 acres of agricultural land. He said, “Banks would be directed to immediately give Rs 10,000 to each farmer, especially those in debt and with small and marginal landholding, to enable them to procure seeds and fertilizers.” 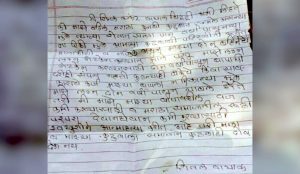 But a government resolution (no 0617/117/2 dated June 14, 2017) has given 19 criteria to be applied. This makes it difficult for small farmers to avail of the relief. Latur District Central Cooperative Bank Ltd, one the best five cooperative banks in the state, offered Rs 675 crore to 220,000 farmers in 2016, out of which 30,193 farmers are (6%) defaulters. “Government criteria are so clumsy that hardly 10% farmers would be eligible for this relief,” a cooperative bank official said on condition of anonymity. Sudhakar Shinde, President of the Farmers Councul of Latur District was also critical of the rules.

Meanwhile, the state government has asked all nationalized banks and district cooperative banks to submit information about crop loans up to Rs 50,000 given to farmers. It clearly indicates that details of loan waiver would be available by the end of July. How farmers would get loans this season remains a mystery.

In this messy situation of loan waiver and relief, farmers cannot afford to wait. They have to finish the sowing in next 15 days. In Latur district, where the major crop is soybean, 22% sowing is already completed. The cost of cultivation of soybean is about Rs 20,000 per acre, out of which at least Rs 10,000 is necessary in the beginning. So Mind of Gangapur is in urgent need of at least Rs 25000 for seed, fertilizer and labor. As usual, he is rushing to relatives, friends and moneylenders that will only increase his indebtedness.

Farmers started protesting in Maharashtra in April 2017. Cultivators from Puntamba in Ahmednagar district decided to go on strike from June 1. The news spread in the onion bawl of India in neighboring Nasik district and later on to nearby districts. All farmers were decided to fight for loan waiver and remunerative prices.

After a gap of almost 20 years, when Shetkari Sanghatana, a farmers union, expressed their anger, Maharashtra has observed this mood distress and protests. Many small organizations of farmers have joined hands and changed strategy to block supply of milk and vegetables. Though the first week of June is full of hectic farming activities, the farmers remained united.

To study the conditions of farmers, the government of India, under the chairmanship of M.S. Swaminathan, constituted the National Commission on Farmers (NCF) on November 18, 2004. The NCF submitted its final report on October 4, 2006. The Swaminathan panel report has recommended that the farmers be paid 50% over and above the cost of the crop as the minimum support price (MSP) to improve their economic condition. This report is still being neglected.

Now entire farming community across India is demanding implementation of the reports recommendations. For the first time after independence, the first week of June is witnessing furious farmers coming on streets in Maharashtra, Madhya Pradesh, Punjab and other parts of the country. “Which crop should we opt for sowing? We do not know. Government officials do not guide and market does not indicate anything,” 72-year-old Rajabhau Deshmukh of Patoda village in Beed district of Maharashtra told VillageSquare.in.

Price crash due to imports

On April 14, 21-year-old Sheetal Vyankat Wayal from Bhise-Wagholi village in Latur ended her life by jumping into a well. Sheetal wrote in her note, “My parents are poor and they don’t have money for my marriage. I am ending my life to lessen my father’s burden and to end the dowry practice in my Maratha community.” Exactly a year ago, Mohini Bhise (18) from the same village committed suicide in so that her poor farmer father didn’t have to sell his one-acre of land for her marriage.

Now even the optimistic youth are losing hope. Climate change, and rising expenses with diminishing returns are making life of farmers wretched. In Maharashtra, 3,146 in 2013, 2,568 in 2014, 3,228 in 2015, and 3,552 farmers in 2016 ended their lives, according to official data. This year is also witnessing a similar scenario even after declaration of a loan waiver.

Swaminathan, the father of Green Revolution, says that farmers need improved and stable income and not loan waivers. This year marks 50th anniversary of Green Revolution & 11th anniversary of submission of his report. While reacting to killing of five farmers while protesting in Mandsour in Madhya Pradesh, he urged, “Long-term solutions are important to ensure that farming remains an occupation of choice among majority of our country’s rural population.”