Instead of raising a hue and cry to protect cows, more immediate action is required to make fodder available to the large cattle population in the country by controlling the menace of unwanted shrubs and weeds in India’s pastures and forests 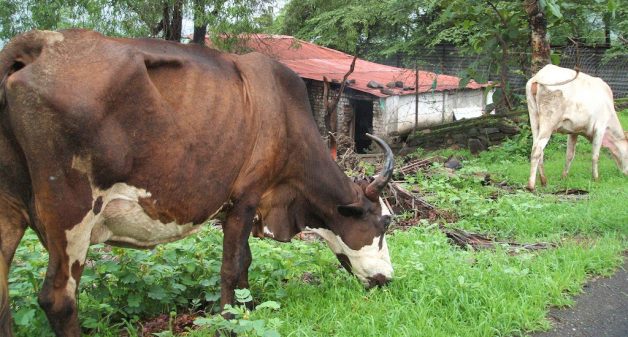 Cattle fodder in common lands and forests has become scarce in India due to weed infestation. (Photo by Shankar S.)

Much passion is now generated in our country on the subject of protecting cattle. However, a dispassionate narration of the reality about the fodder situation for them seems to be largely missing. There are 108 million adult female cows in a cattle population of 200 million, according to the National Dairy Development Board (NDDB). In addition, there are about 100 million buffaloes in the country. Other than the privileged lactating animals with aware dairy producers, they all feed on grasses growing in common lands (forests, public lands around roads, rails and canals, village grazing lands and general open wastelands) and on crop residues.

A very small minority is fortunate enough to feed on specially cultivated fodders. Nearly 200 million small ruminants also feed on the same feed resources. As pressure on common lands has increased, the situation faced by free grazing livestock has become grimmer by the day.

In an insightful article written in the eighties, well-known economist Tushaar Shah had identified four stages of evolution of livestock in any region. The first stage is of abundant slack in commons and in crop residues combined with low farm mechanization and poorly developed milk markets. In this situation, the need for bullocks is the prime driver. As farm mechanization and dairy markets develop, the need for bullocks reduces and the incentive to keep buffaloes increases and the cattle population falls, while number of buffaloes rises.

When the slack in crop residues and commons vanishes, better breeding practice comes into vogue, increasing the proportion of productive animals in the total population. Finally, he suggests both indigenous cattle and buffaloes start getting replaced by tightly managed stock of with crossbred cattle to optimize the use of available feedstock. As the level of farm mechanization, access to vibrant dairy markets and abundance of commons varies a great deal across different regions of the country, animal husbandry composition and population per hectare of land also varies.

The vast central Indian hinterlands bordered in the west by Bhil lands, in the north by the Chambal River basin, and in the east by the Chota Nagpur Plateau are traditionally cattle dominated. Any long rural journey you undertake will give numerous occasions of seeing very large herds of emaciated cows travelling. I have travelled like this perhaps a few hundred times and have always been affected by the sight of the poor ill fed but numerous cows that Hindus famously revere. As one plain speaking economist in India remarked, we do not like to kill our cow mothers, we only starve them to death.

Last year, while traveling from Bhopal towards Betul in Madhya Pradesh on the National Highway 49, I found hundreds of cows abandoned in the stressed forests of Ratapani. Closer investigation revealed that these were dhanihin (ownerless) or orphaned, as farmers prefer to bring them in trolley loads and leave them to their fate in these jungles.

The tragedy is that unwanted shrubs and weeds have invaded our commons, including the jungles. Three weed like shrubs — prosopis in all drought prone areas, parthenium virtually everywhere and lantana in most regions that have dry deciduous forests — are the most prolific. I recall travelling on the infamous 9/11 day from Khajuraho to my home via the so-called jungles between Panna and Katni. The scenery was depressingly green. Depressing because all the green was due to huge clumps of lantana. There were virtually no large trees anywhere.

Lantana has also been prolific in all erstwhile forests in most other parts of Madhya Pradesh, Chhattisgarh, Jharkhand, Karnataka and Maharashtra, and can be seen in most other regions like Meghalaya and Nagaland as well. I am not sure anyone has estimated the lands covered by lantana, but perhaps it runs into a few million hectares! With the aggressive and thickly growing lantana, growth of grass becomes impossible and access to whatever lies beyond the line of shrubs very hurtful to man and beast.

I have wondered how can this lantana menace be controlled. Ideally, if any powerful economic incentive were available from the tree, then of course it would have vanished. For instance, no one finds a single tree of sandalwood anywhere. But it is a completely useless plant and serves only to hold the soil together. On a minuscule scale compared with its availability, people have experimented with making furniture from its stalks and others consider its fuel value for bracketing, but the menace is truly huge. Can no one rid us of this aggressive lantana?

It seems one can. Recently I travelled in an area in the periphery of Kanha National Park in Mandla district. A non-profit organization in the area has motivated local communities to eliminate lantana, at least from their private forests. One farmer had, with the help of a group, cleared 11 acres of his till then useless land of lantana. They also did the stump dressing of whatever rootstock of ladiya, tendu, etc., had survived the outgrowth of lantana. With the lantana gone, the farmer could collect almost twice the quantity of mahua flowers and fruit earning Rs 6000 extra compared with the previous year. And he could cultivate 3 acres of land with some crops.

This farmer plans to cultivate fodder, which will be cut and carried by animal holders in Manikpur Rayat village. It had cost him a mere Rs 9000 to manually uproot all lantana from 11 acres. I am told that during monsoon, when the soil becomes loose, the entire lantana shrub can be uprooted relatively easily. This is what a few farmers have done, and seeing the results, many more farmers and even some forest rangers had approached them to understand the technique. Perhaps we may have found a way of controlling lantana.

Controlling the aggressive prosopis is less urgent for two reasons. In the first place, it is less useless than lantana since the pods are good feed for goats and since the plant stock are commonly raw material for making charcoal. Of course, it has perhaps a similar deleterious impact on depressing grass growth as lantana, but as it is a classical weed of the drought-prone areas, the loss may not be immense. Parthenium (Congress grass) is very aggressive and completely useless but appears not to cause the effects of suppressing grass growth or hindering access. But of course, both these need to be controlled if more lands were to be available for grass growth.

In passing, it may be suggested that the recent protectors of cattle can perhaps channelize their energy to eliminate lantana in all areas near them. That will benefit them, the cows and the environment.

The views expressed in the article are personal.