Despite its many health advantages, the cultivation of safflower for its oil is declining across India because farmers are not finding a ready market and are discouraged by the low prices it fetches 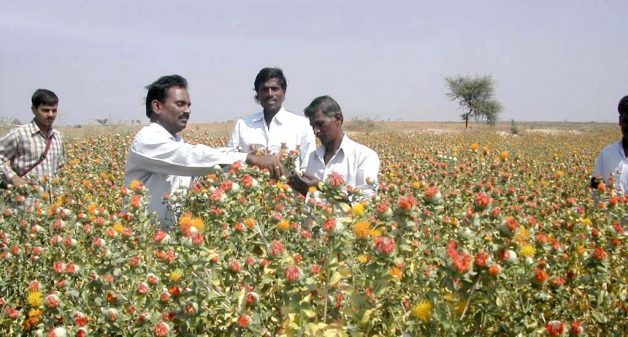 Vijay Jagtap discontinued sowing safflower (kardi) last year on his one-hectare plot in Baramati Pandhare village, 12 km from Baramati town in Maharashtra. “The price we get for kardi is not at all attractive. A mere Rs 2500 per quintal,” says the 51-year-old farmer. “Besides, engaging labor to harvest kardi is more expensive than other crops due to its spines.”

While India has emerged as the largest importer of edible oil, its farmers are abandoning the cultivation of safflower, thanks to low market demand and unattractive price offered to the growers.

In the neighboring state of Karnataka, the state that leads in safflower cultivation, a similar story unfolds. Veera Reddy (61), who owns 15 acres of land in Markunda village, off National Highway No. 65 on the way to Bidar, told VillageSquare.in, “I have been growing kusubi for several years now but discontinued it as there are not many takers for its oilseeds. As there are no oil pressers close by, I have had to ferry my crop in a lorry to Bidar, a 30 km drive from my village, to get it pressed. I would rather grow sugarcane, jowar or tur and receive a better price.”

Another farmer, Ram Kumar Prajapati (55), originally from Haryana who migrated to Gujarat’s Kutch about 18 years back and has around 90 acres of farmland in Kanakpur village in Abdasa taluka, explains his reasons for dumping safflower in flawless Gujarati. “I grew kardi on eight acres and made only Rs 8,000 per acre. Now even the ground water level has reduced further and I don’t have any irrigation facilities,” he told VillageSquare.in. “I would rather grow something which fetches more at less expense.”

One of the oldest oil crops in human history that can withstand drought and low moisture, safflower has been cultivated in Andhra Pradesh as a popular fence crop. Besides the oil, the sharp-needled leaves offer a good defense against the straying cattle. Chevella in Ranga Reddy district and Parigi in Vikarabad district are major centers of safflower cultivation. But here too things have changed.

The family of Siva Kumar of Kurnaguda village who have been cultivating safflower for over three decades on 10 acres, has reduced it to a bare two acres. Explains the 53-year-old farmer: “Now hardly 10% of farmers in our village and neighboring Chevella and Bodempat villages grow safflower. We begin sowing in October end and harvest in January-February but the lack of irrigation or timely rains is the major limitation to our yield. Moreover, we are able to get a mere Rs 3000 for a quintal.”

Unable to earn a handsome price, and with village-based ghanis (traditional oil pressers) shutting shop due to the paucity of oilseeds, farmers in the country’s arid zones in states like Maharashtra, Gujarat, Andhra Pradesh and Telengana are discarding the cultivation of safflower (Carthamus tinctorius), a crop which actually doesn’t need much irrigation or care.

At present, safflower occupies a seventh place in the acreage dedicated to oilseeds in India. Maharashtra, Karnataka, along with Gujarat and Andhra Pradesh, accounts for 94% of the total acreage and about 99% of the country’s production.

Dwelling on the lack of enthusiasm among farmers for safflower, A. Vishnuvardhan Reddy, Director, ICAR-Indian Institute of Oilseeds Research, told VillageSquare.in, “The chief factors for decline of safflower acreage in the country is the preference of the farmer towards gram (chickpea) primarily due to better market price, assured output market and higher farm-level output.’’

Experts opine that the major reasons for the decline are due to higher remuneration from competing for crops such as sorghum and gram, low price realization as compared to other oilseed crops, comparatively low oil content than other oilseed crops, susceptibility to various biotic and abiotic stresses such as aphids and import of cheap palm oil.  Another major cause for its decline is due to the spiny safflower breeds, which involve hiring expensive skilled laborers.

“Farmers need to return to safflower in the larger interests of society and for their own welfare on account of its strength to withstand drought and low moisture,” stresses plant breeder N B Gadagimath of Dharwad -based Sarpan Agri-Horticultural Research Centre, who has to his credit four promising varieties of safflower, both spiny and non-spiny ones which have been commercially tried on large plots on farmers’ field in Karnataka and suitable for mechanical harvesting using combine harvesters. In fact, farmers in Dharwad and Bijapur districts have been successfully making use of Sarpan’s non-spiny safflower varieties.

According to Shaji Kakasaheb Shinde, a senior safflower breeder with Mahatma Phule Agriculture University, Sholapur, “Farmers in Marathawada have continued their faith on safflower as it’s easy to grow, needs less irrigation and inputs while additionally fulfilling their need for a cheap and healthy edible oil. But it’s also due to the availability of mechanical harvesters on rent and existence of oil pressers in the neighborhood. ”

While most safflower-growing countries use the oil as a cooking medium, China for centuries has cultivated it as a dual-purpose crop growing it for medicinal purposes too. In Chinese medicine, safflower decoctions are used in combination with various other herbs and additional ingredients to treat menstrual problems, cardiovascular disease, pain and swelling associated with trauma, male sterility etc.

Value-added medicinal products from safflower seed, oil, and petals have a great potential in the pharmaceutical industry and are waiting to be tapped. In fact, the ancient Ayurvedic text, BhavaPrakash Nighantu, attributes petals of kusuma of activating the nerve system, treatment for heart arrhythmia, controlling hypertension, providing relief in muscular arthritis and joint pains, regularizing the menstrual period, improving the skin color etc. 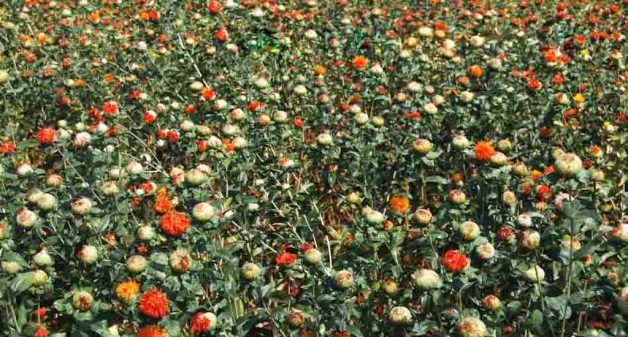 “Safflower cultivation can provide a dual income to farmers, as the florets can easily be collected from non-spiny safflower after the crop matures and sold for food and textile dye,” Nandini Nimbkar, president of Phaltan-based, Nimbkar Agriculture Research Institute (NARI), a non-profit R&D institute engaged in the field of agriculture, renewable energy, animal husbandry and sustainable development since 1968, told VillageSquare.in. It has so far developed eight safflower varieties, both spiny and non-spiny. Its NARI 96, released this year, has 31% oil content while NARI 57, released in 2015, has 37%.

Due to the low price it commands for the growers it’s very unlikely that safflower will ever become a popular crop among farmers but considering its medicinal and nutritional properties, a niche could be created — a fact policymakers need to take into account if the country wants to arrest its continuous decline.

A. Patil, former Director, IARI (Indian Agriculture Research Institute), strikes an interesting note, “We need to lay emphasis on safflower as secondary agriculture crop whereby products and crops residues or even the main crop is used for extraction of high-value bioactive compounds to save this vintage crop from extinction.”